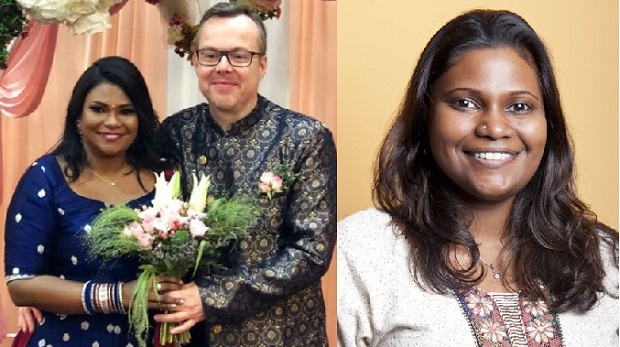 In a ceremony attended by about 30 people, the couple professed their vows before the registrar at 11am, witnessed by her mother, Mary Patto, 73, and sister Shaalini, 41, and other family members.

Kasthuri, 43, said she first met Morvan, 51, a Brittany native, at the European Parliament in Belgium in February 2019 during an anti-death penalty congress.

“We met each other very often and realised that we had very similar values. Before we left to our hometowns, we felt there was a strong connection,” she told FMT.

Kasthuri said Morvan was an anti-death penalty advocate, besides being a journalists’ rights activist after being a former reporter for 25 years.

She said Morvan was also producing a documentary on criminals who were mentally challenged in France.

“He cares for the environment, is a human rights defender, a woman’s rights advocate, and an abolitionist at heart. He is the perfect man for me and I am lucky to have him,” she said.

She said Morvan had been visiting her regularly and she had also gone to France when possible.

Kasthuri said despite France being on Malaysia’s travel blacklist at the height of the Covid-19 lockdown, they had met on the sidelines of events held outside of France.

“At one point, we did not meet for more than a year at the height of the pandemic,” she said.

Kasthuri said they had gone through a Catholic marriage preparation course last weekend, with a church wedding slated for late this year.

She said they would continue to visit each other from time to time.