Russian President Vladimir Putin has threatened to terminate exports and deals with the West and add certain individuals and entities to the Kremlin’s sanctions list in retaliation for sanctions imposed by the United States and the European Union.

Russian President Vladimir Putin introduced a package of economic measures on Tuesday to retaliate against international sanctions placed on Moscow.

The decree, published on the Kremlin website, was “in connection with the unfriendly actions of the United States and its allies that violate international law and aim to illegally deprive the Russian Federation and Russian legal entities of their property”.

The Cabinet of Ministers now has 10 days to determine who will be put on the sanctions list.

Sanctioned individuals will be prohibited from carrying out transactions or signing external trade contracts, as well as from exporting products and raw materials.

According to Russian news agency Itar Tass, the Russian Finance Ministry and Central Bank will “have the right to give official clarifications on the application of this decree”.

The sanctions threat comes as the European Union warns its members against paying for Russian gas in rubles or using a Kremlin-designed loophole through Gazprombank, where payments in other currencies are then transferred to a separate ruble account, going through the sanctioned Russian Central Bank.

It also comes a day after the bloc alerted members to be prepared for Russia to cut off gas to all European Union countries in retaliation for its refusal to make payments in rubles. Last week, Russia cut off gas supplies to Poland and Bulgaria.

Threats of retaliation are mounting ahead of May 9th, Russia’s Victory Day celebrations–a day observers expect Putin to be hoping to be able to demonstrate a significant victory in Ukraine or over the West. OILPRICE.COM

LONDON – Russian President Vladimir Putin put the West on notice on Tuesday that he could terminate exports and deals, the Kremlin’s toughest response yet to the sanctions burden imposed by the United States and allies over the Russian invasion of Ukraine.

Putin, Russia’s paramount leader since 1999, signed a broad decree on Tuesday which forbade the export of products and raw materials to people and entities on a sanctions list that he instructed the government to draw up within 10 days.

The decree, which came into force with its publication, gives Moscow the power to sow chaos across markets as it could at any moment halt exports or tear up contracts with an entity or individual it has sanctioned.

The Russian government has 10 days to draw up lists of those it will sanction beyond the Western politicians it has already.

The decree sets out “retaliatory special economic measures in connection with the unfriendly actions of some foreign states and international organizations”.

Russia’s Feb. 24 invasion of Ukraine prompted the United States and its allies to impose the most severe sanctions in modern history on Russia and Moscow’s business elite, steps Putin casts as a declaration of economic war.

The West’s attempt to economically isolate Russia – one of the world’s biggest producers of natural resources – has propelled the global economy into uncharted waters with soaring prices and warnings of food shortages.

Putin, 69, has repeatedly warned that Moscow will respond in kind, though until Tuesday the Kremlin’s toughest economic response had been to cut off gas supplies to Poland and Bulgaria and demand a new payment scheme for European buyers of gas.

Tuesday’s decree forbids the export of products and raw materials to people and entities that the Kremlin has sanctioned. It forbids any transactions with such people or entities – even under current contracts.

Putin tasked the government with drawing up the list of foreign individuals and companies to be sanctioned, as well as defining “additional criteria” for a number of transactions that could be subject to restrictions.

“This is a framework decree,” said Tatiana Stanovaya, a non-resident scholar at Carnegie Moscow Center and founder of the R.Politik political analysis firm.

“Now all the specific lists should be developed by the government. That’s the main thing and we need to wait for.”

Since the West imposed sanctions on Russia, the $1.8 trillion economy has been heading for its biggest contraction since the years following the 1991 break-up of the Soviet Union, amid soaring inflation.

A significant transfer of Russian assets has begun as the Russian state gains even more influence over the economy, many major Western investors – such as energy giants BP (BP.L) and Shell (SHEL.L) – exit, and oligarchs try to restructure their business empires. REUTERS

STRASBOURG (Reuters) – European Union countries will stop importing Russian oil and refined products, the head of the bloc’s executive European Commission said on Wednesday in proposing a sixth round of sanctions against Moscow for waging a war on Ukraine.

“We will phase out Russian supply of crude oil within six months and refined products by the end of the year,” Ursula von der Leyen told the European Parliament, prompting applause from lawmakers. “This will be a complete import ban on all Russian oil, seaborne and pipeline, crude and refined.”

“It will not be easy. Some member states are strongly dependent on Russian oil. But we simply have to work on it,” von der Leyen said of the proposal, which requires approval from all 27 EU countires to take effect. REUTERS

The Calm Before The Storm In Oil Markets

The first week of May could have brought us a much-awaited paradigm shift, however the markets still appraise the impact of China’s COVID lockdowns amidst the mass-testing taking place in Beijing and the probability of a comprehensive European embargo on Russian oil. With no clear way out for either of those, Brent futures remained range bound, closing Tuesday around $106 per barrel. 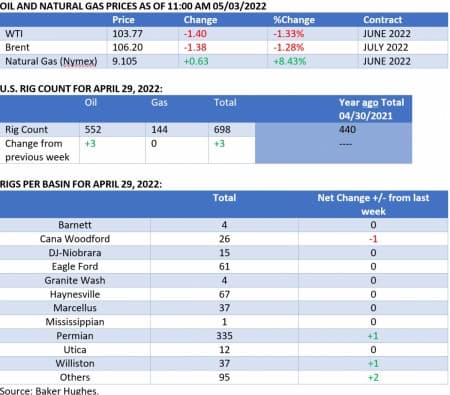 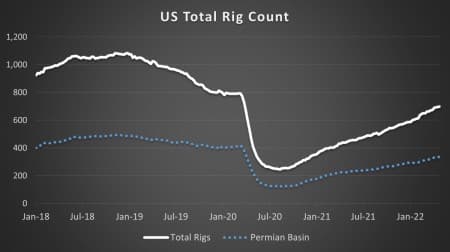 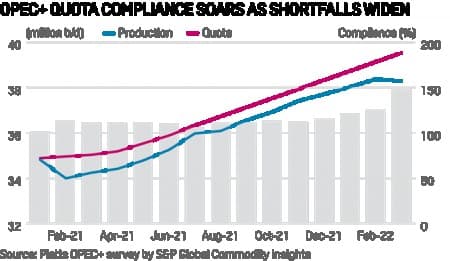 – Whilst OPEC+ is widely expected to agree to another monthly increase of 432,000 b/d, the widening gap between the oil group’s stated objectives and reality is becoming too glaring to ignore.

– For March, the last month for which official OPEC+ data is available, the discrepancy added up to 1.45 million b/d and is set to only increase in April as Russia’s production went downhill.

– Africa has been a source of headache of its own, with Libya’s key infrastructure blockade trimming some 550,000 b/d from global supply, whilst Nigeria and Angola continue to slide lowed amidst force majeures and terminal declines.

– The IEA’s release of 240 million barrels over the next months and China’s demand falling by as much as 1 million b/d on the heels of its COVID lockdowns have both mitigated demand-side issues, however should demand bounce back in the summer, tightness could be worsening again.

– French energy major TotalEnergies (NYSE:TTE) stated that it will continue shipping LNG from the 17.5 mtpa Yamal LNG project in which it has a 20% stake, protecting its core interests in Russia.

– US oil major Chevron (NYSE:CVX) raised its production target for the Permian by 15% vs 2021 levels, starting expecting to produce 725,000 b/d, whilst keeping the $10 billion buyback pledge unchanged.

– Portugal’s Galp Energia (ELI:GALP) is reportedly considering the sale of its upstream operations in Angola, one of its key areas of production areas, signaling that its drive towards renewables is becoming ever more timely.

Germany Drops Opposition to Russian Oil Embargo. Top officials from the German government confirmed that Berlin would be ready to back an immediate European Union ban on Russian oil imports, although yesterday’s EU summit failed to overcome the bloc-wide disagreements on the embargo.

Libya Blockade Squeezes Inventories. Libya’s NOC has warned the country’s warring two governments that the risks of storing some of Libyan grades have long-term consequences – the likes of Bu Attifel require continuous heating, otherwise they solidify in tanks and pipelines because of their high wax content.

Rocket Attacks Rock Kurdish Refining. In a missile attack that was claimed by nobody, a string of rockets targeted two refineries in the Kurdish capital city of Erbil, damaging oil storage capacities at the premises, only two months after Iran’s IRGC carried out a missile strike in the area.

U.S. Gulf of Mexico to See Burst of New Activity. The upcoming months will see the commissioning of BP’s (NYSE:BP) Argos and Shell’s (NYSE:SHEL) Vito floating production rigs, coming on the back of Murphy Oil’s recently started King Quay rig, adding some 280,000 b/d of new output capacity.Related: The U.S. Shale Patch Is Facing A Plethora Of Problems

Shale Pioneers Stick With Payouts. Shale drillers Diamondback Energy (NASDAQ:FANG) and Devon Energy (NYSE:DVN) have boosted their dividend payments whilst keeping production essentially flat, with the former going as far as to quintuple its quarterly payout, despite pressure coming from the Biden administration to ramp up production.

Russia Wants to Build Latest African Gas Pipe Deal. Nigeria’s petroleum minister Timipre Sylva stated that Russia has expressed interest in investing in the long-mulled Nigeria-Morocco gas pipeline that has been discussed since 2016, without specifying if the route will be offshore or onshore.

South African Coal Miners Struggling with Logistics. Mining companies in South Africa have resorted to trucking coal to ports amidst widespread disruptions across the country’s railway network – with Newcastle coal trading at $320 per metric ton the cost is palatable, despite rail being four times cheaper.

US Gas Futures Rise Again Amidst LNG Pull. US natural gas prices have been on the rise again, with the front-month June ‘22 delivery contract edging above $8 per mmBtu amidst an ever-increasing export pull on domestic gas production, with output marginally dropping to 92-93 bcfd.

UK Government Asks Oil Industry to Reinvest. The UK business minister Kwasi Kwarteng has written to companies active in the UK North Sea to set out a clear plan to reinvest their profits into the North Sea, with increasing swaths of the opposition advocating a windfall tax on oil and gas producers.

Ukraine Confronts Storage Tightness. According to media reports, Ukraine is set to face a significant shortage of storage facilities as grain and oilseeds stocks already reached an all-time high of 21 million tons amidst limited export opportunities, weighing on agriculture prices across the globe.