As Covid-19 pandemic enters its third year, people are increasingly getting pessimistic about what’s in store in the year 2022. In the first year of the outbreak (2020), most thought the Coronavirus would be a temporary hiccup. When vaccines were developed – and rushed to the market – people thought the worst would be over soon, giving high hope for the year 2021.

In June 2021, as the number of Americans vaccinated against Covid grows, more than 4 in 5 adults believed the situation was getting better. However, after the Delta variant emerged in July, the optimism dropped like a rock. By October, at least 51% people thought the situation was improving as infections from the Delta dropped. But in November, Omicron dashed those hopes.

Entering 2022, only 20% Americans said the situation is improving, with 22% think it remains the same while 58% believed it is worsening. The good news is the attitude toward social distancing and masking in the public has become more positive. Interestingly, an increasing number of Americans have curtailed indoor dining at restaurants as part of efforts to avoid large crowds.

The overall pessimism has consistently affected the financial markets. On Thursday (Jan 20), early optimism didn’t last long after the Dow Jones Industrial Average dropped 313.26 points, despite having skyrocketed more than 400 points earlier in the day. Crucially, the 30-stock average closed below its 200-day moving average for the first time since December 2021.

Compared to its record set in November, Nasdaq has lost more than 10% – indicating a technical correction. But the Nasdaq Composite entered further correction territory after the index plunged 1.3%, when it was up by 2.1% earlier on Thursday.  Likewise, the S&P 500 tumbled 1.1% to 4,482.73 and closing below 4,500 for the first time since October 2021.

For the week alone (Monday till Thursday), the Dow is down 3.3%, while the S&P 500 has lost about 3.9%, follows by Nasdaq – the biggest loser that had lost 5%. In fact, S&P 500 is looking at its third straight week of losses. The declines in the Wall Street saw Asia-Pacific markets fell accordingly – from Singapore to South Korea and from Australia to China.

Even oil prices dropped 2% to US$86.63, slipping from their 2014 highs on Wednesday. Cryptocurrencies such as Bitcoin plunged by more than 7% to about US$38,500, tumbling over 40% since November from a high of over US$67,500 in 2021. Bitcoin, a common investment to hedge against rising inflation, has become a risky instrument as the 10-year U.S. Treasury yield spiked earlier this week.

To make matters worse, unemployment data released on Thursday suggested that the surge in Omicron could be hurting the economic recovery. Against Dow Jones estimate of 225,000, the jobless claims for the week ended January 15 spiked to 286,000 – the highest level since October last year. It certainly didn’t help that home sales are also dropping. 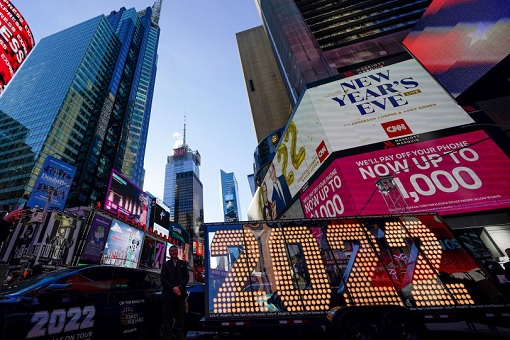 However, as investors anxiously wait for the Federal Reserve’s FOMC meeting next week for details on how it plans to tackle high inflation, financial markets were not impressed with comments made by U.S. Treasury Secretary Janet Yellen on inflation. She said – “I expect inflation throughout much of the year – 12-month changes – to remain above 2%.”

Like it or not, despite rosy pictures painted by certain politicians (didn’t they say 2020 was just a hiccup and 2021 would be a recovery year?), this year will be equally rough and tough. Inflation will drive up interest rates across Europe, Asia, Latin America and almost everywhere, meaning a higher cost of servicing debt would put pressure on everyone with a bank loan or a mortgage.

After two years of disappointment (2020 and 2021), some have already anticipated another year of trauma and uncertainty. Some actually felt 2021 was worse than 2020. According to a study done by Boston University, low-income people were 7 times more likely to experience depression symptoms thanks to prolonging pandemic. And this is why pessimism has been on the rise.

Days ago, Israeli’s Sheba Medical Center found that a fourth booster was only partially effective in protecting against the Omicron strain. It means while a fourth shot of Moderna or Pfizer-BioNTech Covid-19 vaccine boosts antibodies to even higher levels than the third jab, but it is not enough to prevent Omicron. What if another new variant were to emerge this year?