Bad Policies Come Back To Haunt – Why Should We Dip Into Retirement Funds Every Time The Incompetent Govt Screws Up?

We had warned back in 2020 the consequences of dipping into KWSP / EPF retirement funds during the Covid-19 pandemic. Its contributors should reject any proposal to use their own retirement funds – prematurely. However, as many as 7 million members had chosen to withdraw their own savings from various schemes introduced by the backdoor Muhyiddin government.

Basically, there were two types of members who had decided to take advantage of the schemes, from “i-Lestari, i-Sinar to i-Citra”. The first type was desperate contributors who had lost their source of income. The second type was members who did not trust the backdoor government, hence they withdrew their hard-earned money and reinvested them elsewhere.

Regardless, they should not withdraw because the fund was meant for their own retirement age. Instead, the Employees Provident Fund contributors should force the government to fix the problems. This may sound unpatriotic, but it’s better for the government to borrow – even sell national assets – to help the people during the crisis, rather than emptying their retirement coffers. 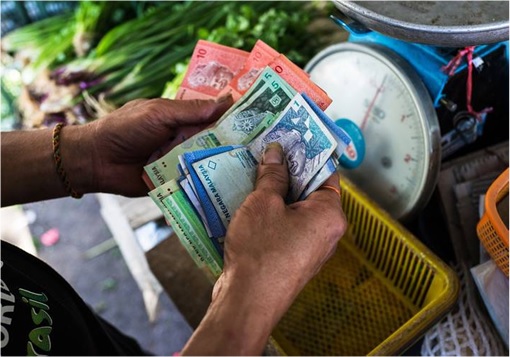 Even if you don’t like the idea, the clueless and corrupt government will still sell national assets to enrich themselves anyway, as in the case of Najib’s 1MDB scandal. Besides, it was the power-crazy Muhyiddin who mishandled Covid pandemic and mismanaged the economy, leading to unemployment, underemployment, sagging economy, fleeing investors and whatnot.

Now, the same selfish leaders, especially former PM Najib Razak and UMNO president Zahid Hamidi, are again aggressively promoting the withdrawals from EPF for flood victims. Can you see how the government, whenever it screws up, has made it a habit of telling the people to dip into their own savings to save themselves? First, it was the Coronavirus and now the floods.

Hilariously, Finance Minister Tengku Zafrul Aziz, who had taken pride in allowing EPF withdrawals during the Covid pandemic, has now fiercely rejected any further withdrawals. He even called people like Najib and Zahid “provocateurs”. Zafrul suddenly could argue intelligently that new withdrawals would burden the next generation who would have to care for the elderly with no retirement savings.

Mr Najib, the biggest national crook who had diverted part of RM4 billion loans from KWAP (Retirement Fund Inc) to his own personal bank accounts, has given three funny reasons why EPF withdrawals should be approved. First, he said the withdrawals will help kick-start the economy. He said another “one final” withdrawal – ranging from RM5,000 to RM10,000 – should be allowed.

Assuming 100,000 flash victims are allowed to withdraw the maximum RM10,000, it would translate to RM1 billion. If a total of RM101 billion withdrawn from the previous three schemes had failed to kickstart the economy, what makes Najib so cocksure that RM1 billion could? Has he forgotten how the country plunged into technical recession after the economy contracted in second and third quarters 2021?

Najib said the withdrawals can be managed by increasing the contribution from employers. He basically wanted to manipulate the system by forcing employers to pay more to fix a problem created by the lazy and clueless government. He also suggested a restructuring of dividend rates by giving more projects to EPF, such as UK-based Battersea Power Station project.

Perhaps Najib has also forgotten how EPF, along with Permodalan Nasional Bhd (PNB), was forced to cough a whopping RM8.3 billion to bail out Battersea due to financial strain and cost overruns. The retirement funds’ role is to invest, not to manage a project that it does not have any expertise, and certainly not to bail out another mega project after a bad business decision had been made.

Thanks to Zafrul, Najib and former PM Muhyiddin leadership, 6.1 million members – nearly half of EPF contributors – are being left with less than RM10,000 in their accounts. And of that number, 3.6 million members have less than RM1,000 (US$238) in their retirement funds. Yet, Najib has the cheek to argue that members should be allowed to withdraw more.

The crook has obviously lost touch with the ground when he said employees would work even harder to recover their savings if they are allowed to withdraw. If they have to dip into their retirement coffers because they don’t even have RM5,000 or RM10,000 in banks, chances are they would not be able to replenish their EPF even if they work doubly hard simply because they are low income workers.

Like it or not, the poor financial position of EPF members today is the direct results of decades of structural problem due to bad policies. Even before the pandemic, more than two-thirds (68%) of EPF members aged 54 had less than RM50,000 in EPF savings (based on a study in 2017), a far cry from the minimum savings target of RM240,000 in their account by 55 in order to enjoy a decent retirement.

To attract foreign direct investment (FDI), Malaysia has adopted policies of cheap labour and generous government incentives since 1980s. From plantations to electronic factories, the country employed low-skilled labour where value-added is low and there is little productivity growth. Initially, it worked wonderfully as it shifted to the industrial sector from an agricultural economy.

In fact, Malaysia had managed to maintain high growth rates over two decades. Its annual growth rate was close to 10% – till the arrival of 1997-1998 Asian Financial Crisis. From 2002-2008, the economic growth rate was averaging 6%. It has never been able to go back to its former glory. The service and manufacturing sectors continued its dependence on cheap labours.

Even though a public sector agency – HICOM (Heavy Industries Corporation of Malaysia) – was established in 1981 to lead the heavy industrialization programme, the wrong policy of protection through tariff in sectors such as motor vehicle assembly and cement industries means the country did not learn to compete in an open market. It creates the culture of complacency.

Corruption, mismanagement and inefficiency saw the industries suffered severe financial losses due to lower-than-projected domestic demand and high operating costs. That was why then-PM Mahathir shocked the nation in the 1980s, when he unleashed another half-baked policy – 70 million population – to create a self-sustaining market. 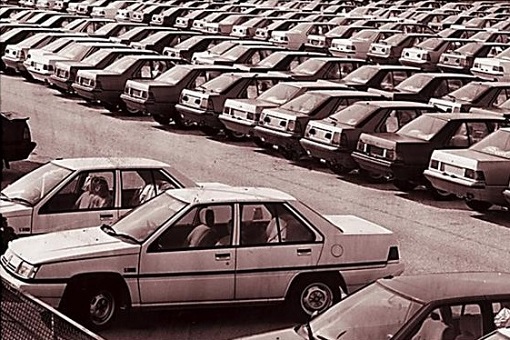 For example, Perwaja Steel, a US$465 million joint venture established in 1982 between HICOM and Nippon Steel Corporation was supposed to be the centerpiece of industrialization. However, it was plagued with mismanagement, production woes and a mountain of debt instead, so much so the Mahathir administration said it would swallow Perwaja’s RM9.9 billion in losses.

Proton (Perusahaan Otomobil Nasional), another industrial project, dominated the domestic market because it was protected by an average 200% tariff on imports of foreign-built cars. Yet, despite “Look East” policy, Proton’s technology partner Mitsubishi was merely using Proton to manufacture and market its own models in Malaysia, without any technology transfer at all to Malaysia.

To make matters worse, the racist and discrimination policy like NEP (New Economic Policy), which was derived from “Ketuanan Melayu”, the ideology of Malay supremacy espoused by UMNO (United Malays National Organization), saw brain drain in the form of hundreds of thousands of technical skills went through a large scale migration to other countries.

Adding fuel to fire, the race and religion politics saw national schools becoming religion schools, producing increasingly low standard students, who, despite tertiary education in local universities, were unemployable as they can’t even communicate in simple English. Most would gain employment with the civil service, unable to compete in the highly competitive private sector.

However, even in the private sector, Ministry of Human Resources through the National Employment Studies in 2009 found that 33.8% of private sector workers were paid below RM700 per month. The World Bank actually found that wages in Malaysia only increased 2.6% yearly. It was only in 2012 that the government announced minimum wages of RM900 (for Peninsula Malaysia) and RM800 (for Sabah and Sarawak).

In July 2020, after much pressure and criticism, Malaysia reluctantly revised the national poverty line income from RM980 to RM2,208 – plunging more than 400,000 households into “poor” category. Still, it doesn’t make sense that the minimum wage remains at RM1,100-RM1,200 when the new poverty line rises to RM2,208. What do you call those who earn RM1,200?

Real wages have been low or stagnating because of price controls, subsidies and the influx of cheap unskilled foreign workers. This is because the government deliberately wanted to artificially create cheap labour in order to attract both foreign and domestic investments. The real problems happened when Malaysia suddenly had to compete with China or Vietnam, who possessed cheaper labours.

Interestingly, back in 1969, both South Korea and Malaysia were classified as lower-middle income countries. Yet, by 1988, South Korea attained upper-middle income status and subsequently high-income status by 1995. Its gross domestic product (GDP) per capita rose tremendously in four decades – from US$1,715 (1980) to US$31,762 (2019) – due to heavy investment in technology, education and R&D spending.

Malaysia, on the other hand, remains “trapped” as an upper-middle income country since 1996. Its GDP per capita over the same 40 years has increased from US$1,775 (1980) to US$11,415 (2019) only. The country is in desperate need of not only foreign investments, but also to create unicorn companies in high-tech sector like Grab or Lazada.

However, the country has a peculiar habit of chasing away top brains – either talents or companies – if the skin colour does not match the government specification. It didn’t help that Malaysia is the world’s second most expensive country to buy cars, after Singapore. A large portion of take home salary would be spent on servicing the car loans, which could stretch to 9 years.

Malaysia’s reliance on cheap labour as the country’s main competitive edge for foreign and domestic investors had caused a lag in raising wages, which contributed to little savings and small monthly contribution to EPF retirement funds. The structural issue spirals out of control when one factors in unaffordable housing, elevated household debt, crazy car prices, and weak Ringgit.

Therefore, flood victims should not burn their own retirement savings to make ends meet. The government should be made to dip into “windfall tax” announced during the 2022 Budget to aid the victims. Even if RM10,000 is given to 100,000 people, it would only cost the government RM1 billion – a clear cut solution.