PETALING JAYA: Residents of one of the male dormitory blocks at the International Islamic University of Malaysia (IIUM) in Gombak were left shaken today when a landslide occurred nearby.

The incident was noticed by the management this afternoon, which took swift action to remove all the students from the block. 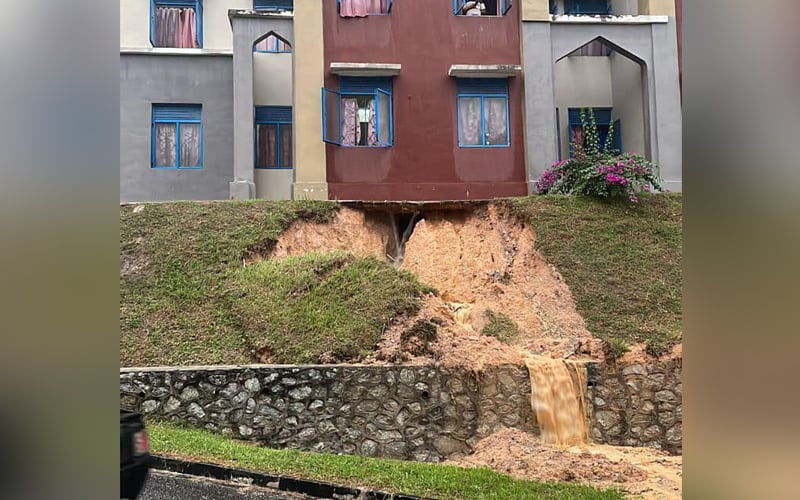 The landslide behind the male dormitory of IIUM in Gombak. All the occupants have been moved to safety.

It is understood that about 140 students who live in the affected block are now being housed in other blocks until repair work is completed and it is safe to be occupied again.

The director of the university’s communications office, advocacy and promotion, Harmi Taazim Mohamad told FMT that the management had informed the fire and rescue department and the Public Works Department (JKR).

They will investigate the cause of the collapse and ensure the block is safe before students return.

“The relocation of students back to the original block depends on the repair work, and when we get information from JKR that the block is safe to occupy, students will be informed,” he said.

Earlier, an apartment block in Taman Duta was also evacuated after a landslide occurred at the base of several of the blocks.

PETALING JAYA: Another apartment block in the Klang Valley has been evacuated due to safety concerns after the floods that hit numerous parts of the country last weekend.

Federal Territories minister Shahidan Kassim confirmed that residents of the Sri Duta 1 apartments in Taman Duta were evacuated after a landslide occurred at the base of several of the apartment blocks.

“Ikram (Institut Kerja Raya Malaysia) is looking into the matter and will discuss with DBKL (Kuala Lumpur City Hall) and the management of the apartments (about a solution).

“DBKL will then inform me about the report (from Ikram),” Shahidan said when contacted.

He said Ikram’s report would likely be ready tomorrow.

Police, however, said there has been no evidence of soil movement in the area.

“As of now, contractors are working to strengthen the foundation. Monitoring work is being done by DBKL every day to survey water and land movement.

“Up to now, no earth movement has been detected,” said Kuala Lumpur police chief Azmi Abu Hassan, according to The Star.

Azmi added that DBKL evacuated 34 households last week, as the area had been deemed unsafe by the Public Works Department.

No injuries have been reported so far.

Photos of the apartment block affected by landslides had been circulating on social media, raising concerns. A number of other apartments have similarly been evacuated.

It was reported on Dec 21 that residents of Indahria Apartments in Shah Alam were asked to leave after it was deemed to be structurally unsafe. Shahidan said the Bangsar Indah condominium had also been recently evacuated.

Bangsar Indah was affected by a landslide nearby which caused rock pile-ups that Shahidan said have since been cleared.

Meanwhile, Shahidan said DBKL would meet with the management of buildings in Kuala Lumpur that have basement parking after reports of many cars being damaged in such car parks.

The implementation of an early warning system for residents to move their vehicles from the car park in the event of flash floods will be discussed, he said.