According to the Harvard Business School, real leaders are not born – the ability to lead or help others triumph over adversity is not written into their genetic code. On the contrary, leaders are made and they are forged in crisis, especially in a time of great uncertainty and real danger. A real leader inspires people through difficult times. Disasters can make or break a leader.

One of the most essential elements of good leadership is the possession of a clear and trustworthy communication. A leader needs to communicate effectively to ensure they don’t confuse people. During crisis, the general public prefers honest answers. Leaders who withhold information or lie would shoot themselves in the foot because it breeds mistrust and uncertainty, and would eventually backfire.

Additionally, a leader must decide with speed over precision during a crisis – quickly determine what matters most and decisively make decisions as if millions of lives depend on it. They know how to set priorities and crucially, know what “not to do”. The best leaders, of course, take ownership instead of engaging in blame games when things go south. They don’t do dumb things that anger the people.

But the massive floods in Malaysia that began on Friday (Dec 17) have revealed the ugly truth of the clueless and incompetent leadership of not only Prime Minister Ismail Sabri, but also the entire super bloated Cabinet of 73 ministers and deputy ministers. Here’re the top-10 dumbest things the government leaders said or done during and after the disaster. Halimah Ali, a politician from Islamist party PAS, blasted a shocking tweet – people should be grateful that “only a few people had died” in the flood, and told people to stop “maksiat” (vices) and minimize “sins”. Her tweet suggested that the flood and deaths were due to vices and sins committed by the people in all the 8 states in the Peninsula Malaysia.

Perhaps PAS, one of three Malay political parties in the ruling government, did not realize that Kelantan, the state under the Islamist party’s rule almost uninterrupted since 1959, has been hit with flooding almost every year. Does that mean the God was angry because the people of Kelantan and the Islamic government of PAS have continuously committed endless vices and sins? 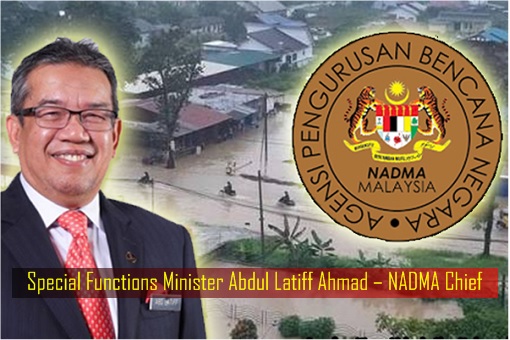 Abdul Latiff, who is also the chief of the National Disaster Management Agency (NADMA), claimed that his agency only manages victim compensation and is not involved in flood management. However, even the incompetent prime minister admits that the role of NADMA includes “coordinating” the rescue of flood victims. But NADMA remained too arrogant to admit its incompetence.

The denial syndrome saw NADMA Director-general Dr Aminuddin Hassim denies that the agency was late in coordinating the rescue of flood victims, saying it had instead assigned all the relevant agencies their duties in advance. But if indeed it was efficient and had delegated all its tasks, why did Minister Abdul Latiff claimed that managing and coordinating flood was not his job? 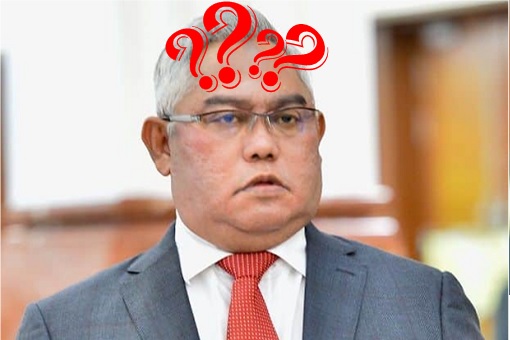 Noh Omar was infamously humiliated by a flood victim during his visit to score come cheap brownie points. In a video that went viral, the minister received an earful from the elderly Malay auntie who said that it was foreigners (Indonesians) – not government agencies – that had helped her and other flood victims during critical hours of the crisis.

Worse, Noh, who had been appointed as chairman of the Selangor National Security Council to replace Chief Minister Amirudin Shari in November, suddenly lost the position after PM Ismail reinstated Amiruddin. Upset and unable to lose face, Noh claimed he is still the chairman of the NSC. But if that is true, it is a direct admission that he screwed up by not activating the relevant authorities during the flooding. 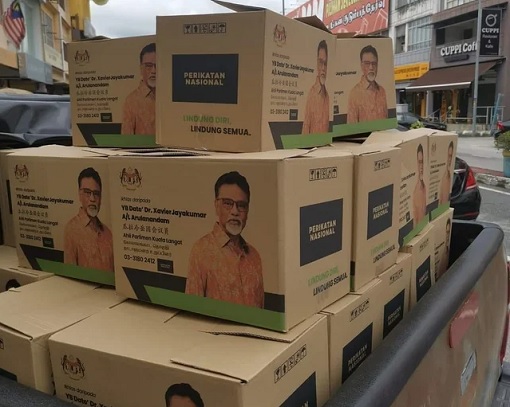 The despicable traitor who jumped ship to backdoor Perikatan Nasional government in order to escape corruption investigation saw the massive flood as an opportunity to repair his reputation. Mr Xavier tried to help the flood victims by sending boxes of supplies. Unfortunately, his effort was easily seen through by ordinary people as yet another cheap PR drama.

Apparently all the boxes were printed with photos of Xavier Jayakumar as well as Perikatan Nasional logo, an old tactic that normally used by Barisan Nasional government for decades. A Twitter user sarcastically mocked Xavier – “No wonder the aid arrived late – they had to wait for the boxes to be printed with logo (and Xavier’s face).” 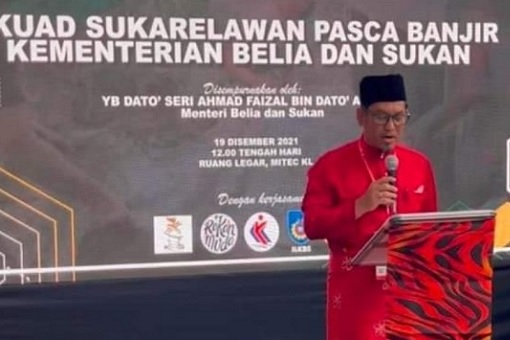 Despite cries from tens of thousands of flood victims begging to be rescued, Parti Pribumi Bersatu Malaysia (Bersatu or PPBM), led by former PM Muhyiddin, decided that the party’s general assembly was more important. The Malay-centric political party had even ended the party’s meeting with fireworks, more than 24 hours after the flooding hit the country on Friday (Dec 17).

Even after the meeting ended, victims still had to wait because Bersatu deputy president Ahmad Faizal Azumu was holding a grand ceremony – huge digital boards and lengthy speech – in conjunction with the launch of a “Volunteer Squad” to help the flood victims. As expected, not a single member of the ministry’s squad could be found at any flood location. Azumu also has disappeared, flying overseas for Christmas holidays.

The traitor knew very well when to seize an opportunity for a “photo op” (photo opportunity). In his attempt to pretend to be a caring leader, he quickly tweeted a video of himself sweeping floors in a house located in Gombak, his constituency. He was, of course, trying to use the floods, which had gotten worse due largely to his own incompetent government, to repair his treachery and treasonous image.

Unfortunately, his drama failed to hoodwink the netizens, who mocked and ridiculed him for looking like a student doing housework in a Pendidikan Moral assignment, not because he was sincerely wanted to help the flood victim. People lectured Azmin that his job was to distribute food to flood relief centres or at least fund volunteers to help the victims that his government refused to help.

After keeping silence for close to a week since the flash floods leave a trail of destruction, deputy president of Islamist party PAS – Tuan Ibrahim Tuan Man – could not resist the temptation to blame everyone except himself. Instead of being sympathetic to the flood victims, he blamed the people for failing to take the government’s weather warnings seriously.

With 46 deaths (5 still missing) and 70,000 displaced in the flooding, it speaks volumes that the clueless government had not done sufficiently to warn the people. If indeed the Meteorological Department had done its job professionally, then the government agencies would have prepared well enough in anticipating the massive floods, including preventive measures.

Instead, not only the government had failed to mobilize relevant authorities, including the armed forces, but were running around like headless chickens in confusion. It was only “after” the flooding had occurred that the government issued red alerts. Besides, was it not Tuan Ibrahim who said in April that Malaysia is immune, not vulnerable to climate change?

As people remained angry and frustrated with the clueless Ismail Sabri government over rescue efforts that were too slow, finance minister Zafrul added salt to the injury with his own political stunt. In the photos and video that have since gone viral, the minister was seen using a NADMA boat which was full of people – body guards, staffs and photographers – while visiting flood victims.

It looked more like they were going for a boat ride at Legoland Water Park. Worse, it took forever to help Zafrul to climb to the rooftop of a house as he walked clumsily for his photo-opportunity. Obviously, he was wasting valuable resources that could be better utilized to rescue or help the real flood victims. It also raised the questions of NADMA’s claims that the agency only deals with victim compensation.

But Mr Zafrul was not done with his antic. People were flabbergasted when the finance minister took a ride on a Toyota Hilux 4×4 Pick Up Truck along with photographers, waving to people as if he had won a gold medal in the Olympic while onlookers – the flood victims – were visibly disgusted and unimpressed with the drama. 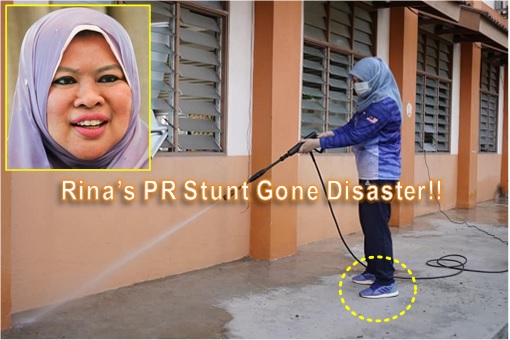 Rina, popularly known as the Doraemon Minister who infamously advised women to put on make-up and be “flirty” with their spouse during the pandemic, was seen wearing high heels at a flood relief centre. The minister, who had told women to talk in a “Doraemon-like” tone, followed by a giggle to make their spouse happy, claimed she didn’t have time to change her shoes.

Social media users, however, did not buy her story because despite her rush after attending her party Bersatu general assembly, she somehow managed to change from baju kurung to pants and blouse. Determined to correct her mistake, Rina later joined activities in flood-hit areas. This time, she remembered to wear the correct shoes. But she made new blunders.

Surrounded by photographers, she fired high-powered water jet to the floor of a school in Salak Tinggi, pretending to help cleaning a flooded area. But the floor area, which she pretended to clean had already been cleaned and was not tainted with any dirt. Netizens mocked and laughed at her stupidity and desperation to show off, but ended up making a fool of herself  instead. It was a PR stunt that backfired badly.

In defending his administration’s rescue effor that was running at a snail’s pace, the clueless prime minister said rescue teams had a tough time getting into Taman Sri Muda, which was the worst-hit area in the state of Selangor. He gave a lot of excuses, but the most jaw-dropping one was his argument that search and rescue missions were crippled by submerged road signs.

PM Ismail said – “They (rescue teams) had problems in responding to victims stranded on rooftops as they could not see the addresses as the road signs had been submerged”. This is perhaps the only government in the world that was trying very hard to find road signs during a flooding crisis. Was he expecting scuba divers or SEAL team to rescue victims stuck on rooftops?

Perhaps the prime minister hadn’t heard of Waze or Google. Even if turtle-egg Ismail was too dumb to understand how navigation system works, the rescue teams should be smart enough to just look for survivors trapped on rooftops. What they needed were powerful torch lights and a pair of ears to listen to victims crying for help. Whatever beneath the road signs cannot be rescued. 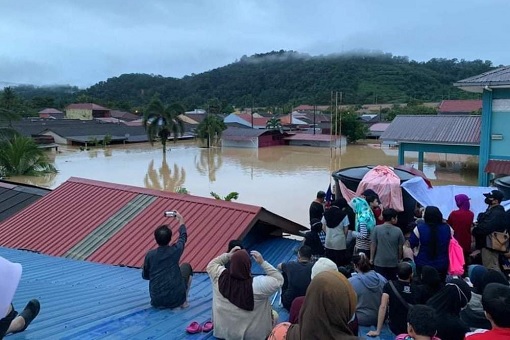 The unelected government of Ismail Sabri was so screwed up that social media like Facebook, Twitter and TikTok have been overwhelmed with videos and photos of the government clowns. In fact, it was so bad that that the Malaysian Communications and Multimedia Commission (MCMC) had tried – and failed – to get Twitter to interfere and remove posts critical of the government’s mishandling.

Still, the burning question remains – will the same people who have been complaining about the clueless and incompetent government continue to vote for them because of race and religion? The governments of Muhyiddin and Ismail knew the answer too well. That’s why they can afford to screw the people and go for Christmas holidays thereafter.