As of Monday afternoon, three people had died and over 40,000 had been displaced across six states. The capital, Kuala Lumpur, and the wealthiest state of Selangor were among the badly hit. Some local observers speculated the economic losses would reach around US$200 million, though official estimates had yet to crystallise.

The meteorological department issued a late statement, in the midst of 36 hours of rain, that the disaster stemmed from Super Typhoon Rai, which pummelled the Philippines. Some residents were stuck on the rooftops of their inundated houses, awaiting help. In Kuala Lumpur, scattered thunderstorms were forecast through the rest of the week.

The storms appeared to be hitting not only the country but also the reputation of Prime Minister Ismail Sabri Yaakob’s four-month-old government, which faces its first serious crisis besides the Covid-19 pandemic. Angry netizens have called the response “delayed” and “futile.”

As the waters rose, Ismail held a news conference at 11pm on Saturday.

Some critics deemed the address ill-timed as residents by then had more pressing concerns. The prime minister did not visit flood-affected areas himself until Sunday. In the meantime, photographs of Ismail officiating at party meetings on Saturday spread on Twitter, stoking resentment.

“The major problem was lack of coordination and leadership to handle the disaster, not capacity,” she told Nikkei Asia. “Malaysia lacks effective responses to disasters, and, in this instance, leaders attending party meetings with fireworks has exposed serious shortcomings.”

Ismail’s late-night news conference, she said, “was about saving face, not saving those facing the floods.”

Beginning his tour on Sunday, Ismail announced an initial fund of RM100 million to repair houses and infrastructure damaged by the floods, while saying each flood-hit household would receive RM1,000.

His opponents were not impressed. “Walking into evacuation shelters and having brief conversations with flood victims may be comforting to the people but it isn’t enough,” tweeted Charles Santiago, a member of Parliament for Klang, the worst-hit constituency. Santiago is from DAP.

On Monday, Ismail posted several tweets detailing the government’s response. “I understand the people’s concern for those still stranded and as I emphasise, rescue efforts are being intensified,” he wrote. “Thanks to the members of various agencies who until now are still working hard non-stop.”

Yet the lower house on Monday rejected a motion by opposition lawmakers to discuss the flood, claiming it was already in the past. “It is as though they don’t see this as a very serious matter,” Fahmi Fadzil, an opposition lawmaker from southwestern Kuala Lumpur’s Lembah Pantai, told reporters.

Ismail took power in August after his predecessor, Muhyiddin Yassin, stepped down over a lack of support. The change marked the return of Umno, which lost the 2018 general election under the cloud of the 1MDB scandal. The new prime minister quickly sealed a cooperation pact with opposition parties, pausing months of turmoil.

The flooding has shaken the relative political calm.

Oh Ei Sun, a senior fellow at the Singapore Institute of International Affairs, said the federal and respective state governments “should have been prepared but this is not the time to point blame.”

“My request,” he added, “is get to the ground and help the people.”  FMT 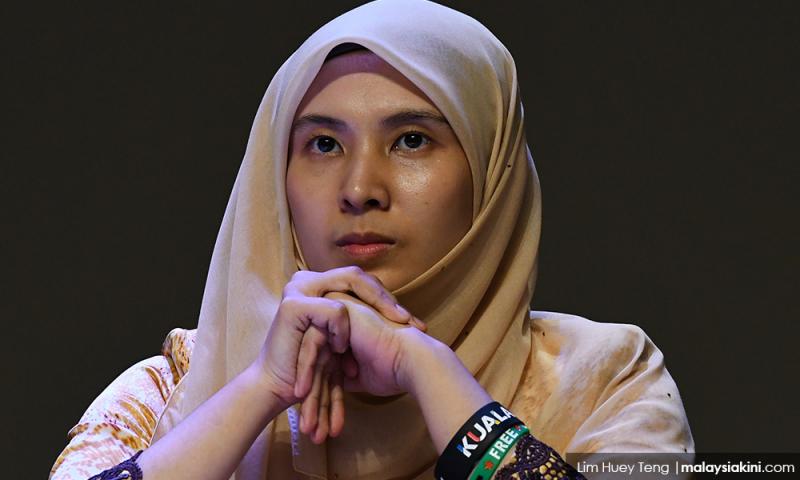 With an uncertain number of fatalities, up to 34,000 displaced from their homes and Health Minister Khairy Jamaluddin announcing an increase of Covid-19 cases at flood shelters, many are questioning the federal and state governments’ slow response to the situation.

Footage of a parliamentary speech by Permatang Pauh MP Nurul Izzah Anwar (above) on July 26 warning the government to prepare for the upcoming monsoon season has gone viral.

During the speech, Nurul Izzah stated that Covid-19 cases were already putting a huge strain on the system and that it would be disastrous if the federal government did not factor the monsoon season into its plans under the National Recovery Council (NRC).

“In Penang, the state government and related authorities are working together to plan for floods in the coming season.

“We need to have plans put in place to encounter these floods during the pandemic.

“This has to be taken very seriously, including by the Finance Ministry,” Nurul Izzah had said.

Despite the PKR lawmaker’s warnings, flash floods have taken the peninsula by storm this weekend. In Pahang alone, the number of evacuees seeking shelter at relief centres (PPS) has reached 25,669 people in 239 PPS this morning.

Earlier, Khairy confirmed that 181 positive Covid-19 cases had been detected at PPS nationwide involving 117 cases in Selangor, Pahang (52), Kelantan (six), Kuala Lumpur (four) and one each in Negeri Sembilan and Malacca.