KOTA KINABALU: Chief minister Hajiji Noor has announced that each Sabah constituency, including those held by the opposition, will be allocated an additional RM2 million next year.

However, Hajiji, who is also the state finance minister, said the state government will establish a proper method to channel the allocations to the opposition assemblymen.

He made the announcement after Luyang assemblyman Phoong Jin Zhe and Tungku representative Assaffal Alian questioned the chief minister if the assistance would be extended to opposition members.

“Yes, every constituency will get RM2 million but we will find a mechanism on how to distribute the funds to the opposition,” he told the state assembly during his winding-up speech here today.

“We understand that every area has its needs so we will find a way.” 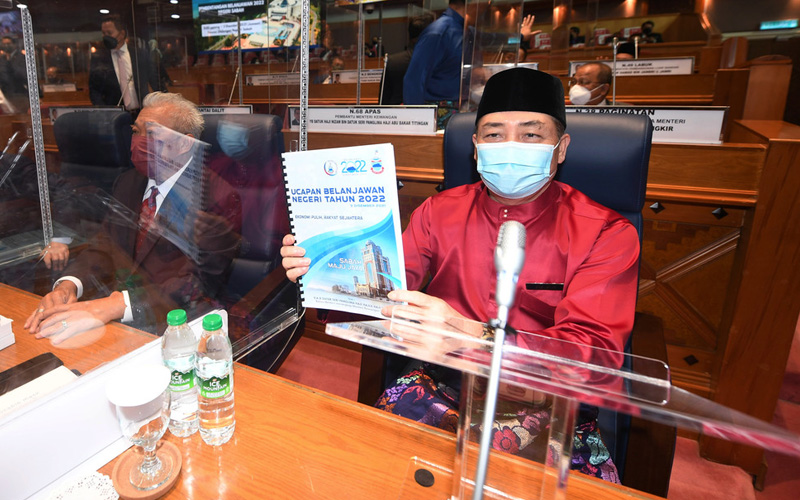 Hajiji hoped the assemblymen would use the allocations properly to help the people or address issues in their respective constituencies.

Today is the last day of the debate session for the state budget 2022, but much of the proceedings have been hit by connectivity problems.

Only selected government and mainstream media organisations were allowed to cover the sitting physically at the state assembly building due to Covid-19 restrictions, with others only having online streaming to depend on.

Earlier, Moyog assemblyman Darell Leiking had asked Hajiji whether it was true that Hoch Standard Pte Ltd, the firm involved in the Sabah carbon deal, would receive a 30% commission for managing carbon trading activities.

Hajiji replied that the deal, known as the Nature Conservation Agreement (NCA), has yet to be finalised.

He agreed with a proposal by Leiking that the figure should be lower than 30%, adding this would mean more income for the state government.

“The way I see it, this (deal) still has a long way to go (before being finalised). There are also criteria the Sabah attorney-general wants the consultant firm to fulfill,” he said.

He said he also took note of a suggestion by Senallang assemblyman Shafie Apdal over the establishment of a special committee to oversee the project in order to address matters of transparency.

Deputy chief minister Jeffrey Kitingan and Shafie were engaged in a heated debate over the NCA last night, when Kitingan accused the Warisan government of having started the project during its term.

Shafie refuted Kitingan’s charges, saying that although the project was brought to his attention, he had rejected it because it involved matters of land.

Hajiji, in his winding-up speech, also said the state government was committed to pursuing Sabah’s special grant payment from Putrajaya.

He said a committee led by the state’s second finance minister, Masidi Manjun, has been formed to hold further talks with the federal government.

On the surplus budget, he said he understood the concerns raised by Sri Tanjong assemblyman Justin Wong, but the proposed budget reflected the state government’s careful and realistic management of its financial resources.

He said the budget was devised based on the needs of the state ministries and departments while taking into account the capacity to spend and implement projects.

“However, if there is a pressing need for us to go beyond what was proposed, the matter will be managed through additional allocations in the middle of next year,” he said.

Wong had previously said the state budget was unrealistic, pointing out that economists have stated that it was more fiscally responsible to propose a deficit budget in the aftermath of Covid-19.