Make Up Your Mind – Use Malay For Timah Whisky You Complain, Use English For Buildings You Also Complain

As the 15th General Election approaches, the racist and extremist politicians have started shifting gears in their usual comical contest to become the Malay champions. The goal is, or course, to hoodwink the gullible ethnic Malays. Unlike previously, this round will see three Malay political parties – UMNO, Bersatu and PAS – fighting tooth and nail to win the Malay vote bank.

Taking the cue from Sabri, who is vice-president of UMNO, Bersatu Youth Information Chief Mohd Ashraf Mustaqim Badrul Munir quickly took the opportunity to be more racist than the premier. Stirring up racial and religion sentiments among the Malays, as if the Malay language was under threat, Ashraf played up an old issue – abolishing Chinese and Indian vernacular schools.

In his argument, Ashraf said the vernacular schools must be scrapped because even Bangladeshis speak better Malay language than the non-Malay students. Joining the bandwagon was Nazri Aziz, one of UMNO infamous thugs and highly corrupt warlord, as well as Rais Yatim, another ultra-Malay who allegedly raped his Indonesian maid not many moons ago.

When turtle-egg PM Ismail Sabri said government agencies, government-linked companies (GLCs) and the private sector should use Bahasa Melayu at their events, meetings, and conferences, and even on their products, he has actually made a fool of himself. There’s a reason why the Malay language cannot be used in most of the conferences, let alone products.

As much as government and private sectors would like to uphold the dignity of the Malay language, in reality, the vocabulary limitation of the language has been the biggest obstacle for as long as one can remember. In the 1980s, when the computer was introduced, even Malay teachers made fun of the language, joking about “joystick” being translated to “kayu gembira”.

Bahasa Melayu was caught with its pants down as computing and information technology introduced more jargons. Hard drive was directly translated to “pandu keras” and floppy disk as “cakera liut”. Plug and play was embarrassingly translated to “cucuk dan main”, while a port was known as “lubang”, not to mention client-server architecture raised eyebrows as “seni bina pelayan-pelanggan”.

The prime minister should ask whether his own son uses “muat turun” or rather “download” when downloading mobile games. Do you force presenters at an I.T. conference to say “pengkomputeran awan” to mean “cloud computing”? Nobody is stopping the government agencies – if they think they have enough vocabulary to conduct meetings entirely in Bahasa Melayu.

Even in daily life, the Malay language has been “stealing” heavily from the English language, such as informasi, produksi, operasi, kaunter, kapasiti, premis, positif, skuad, kompleks, kempen, proaktif, activiti, prosedur, forensik, portal, maksimum, vaksinasi, pandemik, fizikal, internet, aplikasi, teknologi and the list goes on. So, what happens to the dignity of Bahasa Melayu? 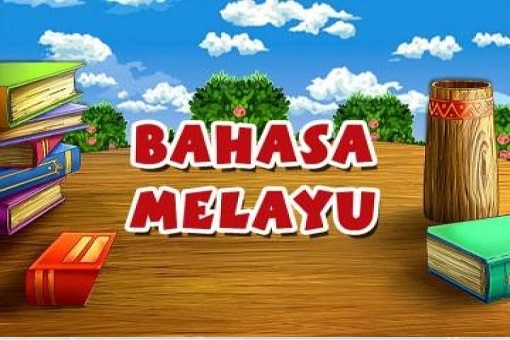 Mr Ismail’s political career started as early as 1987, when he was appointed as a Member of the Temerloh Division UMNO Committee. Therefore, he was part of the Barisan Nasional government that looked down on the Malay language, leading to the downgrade of “ilmu alam” to geografi and “ilmu hisab” to matematik, was he not? Why UMNO Malay heroes were so embarrassed with their own language?

Ismail Sabri also falsely claims that Bahasa Melayu is not only being used internationally, but is ranked the 10th most popular language in the world. Exactly what was his definition of “international”? The language is officially “spoken” only in Indonesia, Malaysia, Brunei and Singapore. That does not make it a lingua franca, let alone a dominant language of science, technology, international diplomacy, business, and aviation.

According to Google and Wikipedia, Malay language is nowhere in the 10th most spoken language in the world. The PM seems to have shamelessly assumed Indonesian language as Malays language, hence the 10th spot on the chart. But there are noticeable differences in spelling, grammar, pronunciation and vocabulary between Malay and Indonesian languages.

Before the clueless prime minister lectures everyone to use the Malay language, he should explain why his political party – UMNO (United Malays National Organization) – has been using English as its abbreviation since it was founded in 1946. In Malay, the party is called Pertubuhan Kebangsaan Melayu Bersatu or PKMB, also known as PEKEMBAR.

In the same breath, PAS, the Malaysian Islamist Party, should be called PIS because in Bahasa Melayu, the extremist and radical left-wing party is called “Parti Islam Se-Malaysia”. Even when it was founded on in 1951, it was known as the Persatuan Islam Se-Malaya (Malayan Islamic Organisation). The party should be renamed as PIS if it really wanted to champion Malay language.

The biggest clown who tried to score some cheap brownie points was Nazri Aziz, who criticised Kuala Lumpur for having too many street names and buildings in English, as if the capital is London. It’s laughable coming from a Malay leader who not only named his son “Jean Pierre Azize”, but also enrolled the 5-year-old junior into a French school in France.

Nazri is the last person qualified to champion Bahasa Melayu when he and his arrogant wife were so ashamed of their own inferior mother language that their son had to be sent away to a foreign country. Was he retarded? Of course, besides location, slapping English names for buildings like Hampshire Residences or Bangsar South would certainly boost the value and sales of the property.

Do you think the family of crooks – Najib Razak and Rosmah Mansor – would splash millions of dollars for luxury Pavilion Residences condominiums in Kuala Lumpur if the building was named “Kediaman Ramli”? Why hasn’t the government changes the iconic shopping mall KLCC (Kuala Lumpur City Centre) to PBKL (Pusat Bandaraya Kuala Lumpur) for the sake of Malay dignity?

Likewise, Bangsar and Damansara are meaningless in the Malay dictionary. The name Damansara originally referred to a place known as “Damar Sara”. However, when Sir William Maxwell (then British Resident of Selangor) implemented the Torrens system of land registration in 1891, the land registrar mistook the “r” as “n”, and merged the name as “Damansara”.

Another Malay “munafiq” (hypocrite) – Rais Yatim – has criticized local authorities for allowing the practice of choosing English names over Malay names. The alleged maid rapist said it was “disgusting” for people to widely use English names. Heck, the racist man has even criticized Chinese who adopted English names like Michael, James or George over their Chinese names. 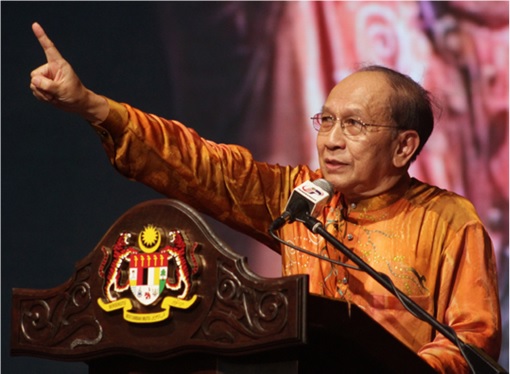 Yet, he disgustingly named his four children as Malini Rais, Dino Rais, Danni Rais and Ronni Rais. Clearly, those are not Malay names to begin with. Even his name – “Rais” – is Arabic, not Malay. And he has the cheek to mock and insult ethnic Chinese for using English names, but didn’t realize he was the Malay traitor who loves Western names, the same way Nazri Aziz adores French names.

Fine, let’s empower Bahasa Melayu. But when a Chinese company, Winepak Corporation, produced award-winning “Timah Whisky” meant only for non-Muslim consumption, all the racist and extremist Malay politicians whined and bitched until foaming at the mouth that the whiskey would confuse the Muslims, despite explanations that “Timah” means “tin”.

The beverage manufacturer of Timah Whisky should be given a medal for promoting Malay language, using “Timah” rather than Captain Speedy in the branding of Malaysia-made whisky. Can the super confused ultra Malays make up their mind which language they wanted to promote – Malay, English, French, or Arabic?

When Timah was promoted, largely in recognition of the country as once the largest tin producer in the world, they twisted and politicised it as an insult to the Muslims, claiming Timah was short for Fatimah, who was Prophet Muhammad’s daughter. But when Western names were used on buildings, they complained again that Malay language should be prioritized.

Bersatu Youth Information Chief Mohd Ashraf should advise his party president, Muhyiddin Yassin, not to use Covid-19 because it sounded very Western. Instead, all the Bersatu clowns should call the virus as “Kobis-19”, exactly how then-PM Muhyiddin pronounced it at the initial stage of the pandemic in March 2020. There’s little doubt Kobis is more Malay than Covid.

A language is just a communication tool. The popularity and acceptance of a language depend on demand and supply. Just because a Bangladeshi can speak better Malay language does not make him more qualified than a non-Malay student. A Bangladeshi has to speak Malay (after years in the country) because they have to earn money here. It was part of a survival tool.

In the 1980s, during the time when Malay teachers happily made fun of “joystick” as “kayu gembira”, many non-Malay students gladly enrolled in government schools. Their spoken and written Bahasa Melayu were perfect, so much so they easily emerged top scorers in examinations, beating even Malay students in their own mother tongue game. That’s a fact.

As UMNO politicians played racial and religion cards, non-Malay students were actively and systematically discriminated. Not only they faced difficulty to enter local university thanks to racial quotas, gaining employment with government agencies were more difficult than striking lottery. Even if they were lucky enough to be employed, they would hit another round of discrimination during promotions.

Can non-Malays become IGP (Inspector General of Police), Chief of Defence Forces, CEOs of GLCs or other public institutions, even if he / she possessed excellent proficiency in Bahasa Melayu? Without incentives, naturally, the value or need to master Malay language disappears over time, leading to low interest among non-Malay students.

In addition, why do you need to master a language that has no value the moment you step out of Malaysia? Criticizing non-Malay students and threatening to shut down vernacular schools are just a distraction from the reality of poor quality of national schools that has been transformed into religious schools. That’s why even Malay champion like Nazri Aziz sent his 5-year-old kid to France.