In a political era gone by, you were the face of the future. You were young then and you had a fresh face. The political ideology that you nourished, nurtured and expounded were in many ways, a breath of fresh air.

Your future back then could not look brighter. It looked like the course of your future was set in stone as more and more greatness was trusted upon you. I should know. I journeyed with you, caught up in the exuberance of an idealist. Four decades have come to pass since and you are still nowhere near to fulfilling your dream of one day taking the reins of this nation and claiming the ultimate prize, the premiership.

Perhaps you were less fortunate than most others by allowing yourself to be the footstool to a master politician who never really wanted to let go of what he believed was his right to hold.

Perhaps you were innocent enough to be exploited and made use of, believing that your day will eventually arrive. It never came. It must have dawned on you by then that if the baton of power was being withheld from you, it would be your right to go after it, no matter what it took I suppose. With justification, your patience would have grown thin.

It was time to make your move. Your camp had won the race for the Umno Youth leadership. Your camp had won the race for the Wanita leadership. All it needed was for you to top the icing on the cake. But you backtracked. You were told that the grand prize awaited you and that you must be patient and that fragmentation of a system soundly in place would serve no purpose except to allow for certain groups of people and a certain race to dominate and decide on the well being of your own race and religion.

The master politician was at work at the assembly and suddenly you found yourself in a corner because what was at stake was merely your ambition, against the well being of your own kind. The fact that this was suggested in front of a huge gathering of political warlords must have created second thoughts for you. You meekly surrendered the initiative to the puppet master. The rest, as they say, was history.

But the ambition in you never faltered. In fact, once out in the cold, it probably dawned on you that you had been played out and this gave rise to the belief that hope springs eternal. Thus began the birth of Reformasi. Again, you gave many of us hope, for a fairer and just government, for equality, for freedom and for better things to come.

Such fiery and eloquent speeches touched a raw nerve in us. Everyone who believed in you believed that the time for change had come. As the momentum picked up, so did the spirit in us. Change was what we wanted. It was in the offing. It had to come.

Unfortunately for you, there were others who saw that this could threaten the very fabric of what was in place. Woe betides anyone who would venture to disrupt what had been set up by the master politician and tactician who had already planned his next moves long before anyone realised. You suffered the consequences. But fortunately for you, your torch was carried by others who believed in you and hence the birth of a new generation of youthful leaders within the ranks. The political landscape was changing.

Somewhere down the line, your ambition, it would appear, replaced your focus. You were now willing to compromise with the arch-enemy, who needed you now more than ever. You, too, decided that he was needed if you were to finally claim the grand prize. You only had to abide for a time, you were told. But your strong supporters couldn’t wait and began to push the buttons.

We will never know if that grand prize was really yours for the taking although he had said so. More often than not, your morals were called into question by the master politician who had gone to great lengths to explain why you could not be the prime minister.

At other times, he sang a different tune by declaring he wanted you all along to become the 8th prime minister. This was politics at its greatest because it all depended on who you were talking to. Still, the ambition in you burned without any indication of it even flickering.

It was more evident in the just-completed Melaka state elections when you compromised on your principles and integrity by welcoming “frogs” in your ranks. Your party lost all the seats it contested.

Perhaps your time has come to make way for some other. Tried and tested, the end product remained the same. So near, yet so far. Maybe it was written in the stars, as a song goes “Why Am I Always the Bridesmaid”.

You can choose to accept that reality, or you can keep believing in the story of the emperor’s new clothes. Come GE15, this will become a call that you and only you can make.  FMT

Anwar Ibrahim: The One-Eyed Man In The Land Of The Blind 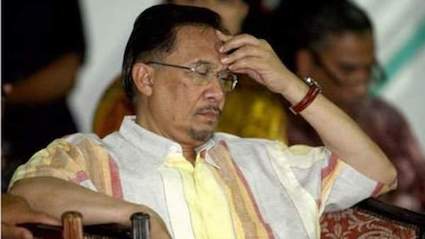 And herein lies the problem. All those better than Anwar have left him years ago. All those still around are worse than Anwar. So how can PKR and Pakatan Harapan get rid of a one-eyed man and replace him with someone totally blind?

Manchester United’s manager got replaced not because his football team lost one game. He was replaced because of a series of defeats. The 4-1 defeat against Watford was not the reason; it was the final straw that broke the camel’s back.

Political analysts and observers are looking at and quoting last weekend’s Melaka state election debacle as the reason why Anwar Ibrahim needs to go. No, that should not be the reason. The Melaka disaster is merely the final straw. Before this there were many straws that added to last weekend’s straw finally broke the camel’s back.

Some of you may remember that I first turned my back on Anwar in 2010 (and many of you were very angry about it). That was after Anwar told Malaysians in Australia that I may have my opinion, but that does not mean the party needs to listen to me. After all, I am living in the UK, so what do I know about what is happening in Malaysia?

I could use this same argument against the many so-called ulama’ or religious scholars. They are all living in Malaysia and were born more than 1,000 years after Prophet Muhammad. So what do they know about what happened in Saudi Arabia 1,400 years ago?

They quote the Hadith and the Sunnah and tell us this was what the Prophet said and did. As Anwar said, what do they know about things that were said and done thousands of miles away and thousands of years ago?

So, when Anwar suggested I am ignorant of Malaysian affairs and hence should not be commenting and offering my opinion, I decided to wash my hands of that snake-oil merchant named Anwar Ibrahim. In 2010, I gave an interview with TV3 in Australia, which they aired just before the Sarawak State Election in April 2011.

In fact, even earlier, the late Karpal Singh had washed his hands off Anwar as well after the 2008 “16th September” disaster. Hence, two years before me, Karpal had already written Anwar off, and that was 13 years ago.

So, it is not because of the Melaka state election disaster that Anwar must go. There are many reasons as to why Anwar must go. Melaka was merely the last straw in a huge bundle of straws that finally broke the camel’s back.

But the problem is not so much that Anwar is instrumental for a string of comedy of errors. It is that Anwar is a one-eyed man in the land of the blind. Anwar may be half-cocked and may be bad news for Pakatan Harapan. But, if Anwar goes, who would be suitable enough to replace him?

And herein lies the problem. All those better than Anwar have left him years ago. All those still around are worse than Anwar. So how can PKR and Pakatan Harapan get rid of a one-eyed man and replace him with someone totally blind?

But it is good that Anwar stays on as the PKR-Pakatan Harapan leader, at least until after the Sarawak state election and GE15. Anwar’s leadership of the opposition will guarantee the opposition a string of defeats like what Manchester United is suffering from. The greatest service Pakatan Harapan can do for Malaysians is to keep Anwar as their leader so that they never come back to power.

(The Sun Daily) – It is wrong to place the blame squarely on Datuk Seri Anwar Ibrahim for Pakatan Harapan’s (PH) defeat in the Melaka elections, as every decision made by PH is collective, says Mohamed Hanipa Maidin.

The Amanah vice-president also stressed that Anwar was still the best person to lead the opposition coalition.

“I received messages urging me to blame Anwar for the defeat in Malacca. Everyone has the right to criticise both PH and Anwar. Yet, I cannot agree to blame him alone and ask him to step down, at least for the time being.

“We have to remember that whatever decision was made by PH was agreed collectively. Therefore it is not fair to solely blame Anwar for our loss,” he said in a statement today.

PH stood in all 28 seats in the Malacca elections, with PKR fielding candidates in 11 seats, Amanah 9 seats and DAP eight. PKR lost all 11 seats to BN.