But there is no holiday mood. Workers in the 4D shops know their days are numbered, now that the state has decided against renewing their outlets’ operating licences.

Most of these shops employ senior citizens. Their brows furrowed when an FMT reporter asked what they thought about the impending closure of the outlets.

One of them, a man in his 60s called Ah Tiang, said: “What are we going to do? This is negara Islam. We can’t say anything, can we?” 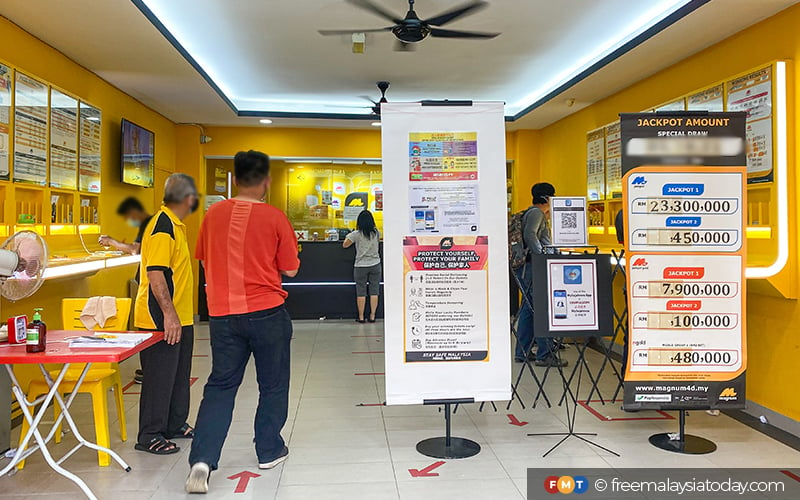 He is five years into the job and he makes a minimum wage, getting RM1,200 a month. He said workers would be put on a management track if they did well, which would allow them to earn double that amount as a senior clerk.

Ah Tiang, a bachelor, rides his kapcai (motorbike) to work from his house in Taman Berjaya. He said half of his pay went to rent. Recently, he had to spend a fair bit to buy furniture to replace items damaged by a series of flash floods.

“I only completed my education up to Form 3,” he said. “I don’t know where else I can work. I have asked a coffin shop if I can get a job there doing woodwork. But they said factories were making coffins now.”

A worker at a 4D shop in Kulim said the shops had never allowed Muslims to gamble. Over the years, she said, she and her colleagues had been turning away would-be punters who were Muslims.

“We point out to the signboard that says ‘No Muslims allowed’ and they would leave. We don’t even allow minors here. We check their MyKads.

“Our gaming app also automatically rejects Muslims. That shows how strict we are about this.”

She said the impending ban was unfortunate because illegal bookies in Kulim were known to go around coffee shops offering “black” 4D numbers.

According to a punter who said he had placed bets through the black system, one would need to send one’s chosen 4D number by SMS to a syndicate member. Payment is made via online banking. The winning numbers are those picked by legal 4D companies but the payouts are higher.

“If you can win RM1,000 through the 4D shop, you can win RM1,200 here,” the punter said. “Payment is immediate through bank transfers for small amounts and cheques for large amounts.”

A man handling the operations of a 4D outlet in Kedah said things got topsy-turvy when the menteri besar announced that licences would not be renewed.

However, he said, one shop rushed to renew its permit and managed to get it done for another year. The cost of doing so is typically RM884 in Alor Setar.

There are currently 45 shops operated under the DaMaCai, SportsToto, and Magnum franchises in Alor Setar. The 4D operator said he expected at least 10 of them to close shop by January.

The only shop in Langkawi would close next October, he said.

In the 1970s and 1980s, the man said, many Malays held senior clerk positions in these shops and no one batted an eyelid.

A punter in Kulim alleged that many high rollers among Muslims were fond of betting in casinos in Genting. He also claimed to know of many online gamblers among Malay youths.

Asked if he would head to the nearby Penang town of Bukit Mertajam to buy his 4D numbers after the closure of the shop in Kulim, he said it would be too much of a bother.