Sukmawati Sukarnoputri the daughter of Indonesia’s first president Sukarno has decided to convert back to Hindusim in an elaborate ceremony (not open to the public despite the well publicised invitation card).  Here is the news: Sukmawati Sukarnoputri daughter of President Sukarno to convert to Hinduism
Sukmawati is founder of Indonesian National Party (Partai Nasional Indonesia-PNI)
She will embrace Hinduism in formal ceremony on October 26th (CNN Indonesia)
‘Sudhi Wadani’ will be conducted at Bali Agung Singaraja, ancestral land of the family
Bali Agung Singaraja is monument to Sukarno in Tampaksiring Bali 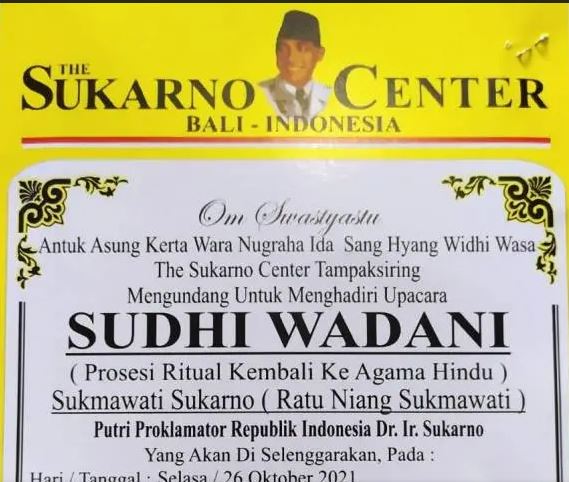 Notification by Sukarno Centre in Bali announcing the conversion

she is well versed in Hindu theology

Indonesia is the largest Muslim country in the world.

Despite being the largest Muslim majority country in the world, the Indonesians are just a super cool people when it comes to their religious plurality.  In Malaysia perhaps Sabah and Sarawak also have a similar attitude towards acceptance of religious plurality.

In one snapshot their names reflect their own language, their history, their culture and most important of all their identity.

Indonesia is indeed a unique country and a unique society.