THE threat of a new Covid-19 wave is Health Minister Khairy Jamaluddin’s biggest worry with the reopening of interstate travel from tomorrow.
Khairy said although he welcomes the easing of restrictions and reopening of borders, he added that the threat of another possible wave was apparent given the severity of the virus and the complacent attitude of the people.“Every night I worry. I worry because we don’t know how this Sars-CoV-2 virus behaves… it’s a novel virus. We don’t know how it mutates, how it behaves and what it is likely to do next… and, most importantly, we also don’t know how people behave.

“I know everyone is going to be rushing to the borders tomorrow but at the back of my mind… as the health minister, my biggest worry is another wave,” he said today at the Malaysian Medical Association’s Malaysia Doctors’ Day Celebration.

Khairy did not rule out the possibility of another wave, saying several other countries with a high vaccination rate similar to that of Malaysia’s, have also experienced a wave of infections.

He said that although the majority of the new cases were in the less severe asymptomatic and mildly symptomatic categories 1 and 2, he said the chances of the severe cases increasing were there.

“As the infection grows, imagine 98% of the cases are in categories 1 and 2 but the remaining 2% in categories 3, 4 and 5 gets bigger in terms of the absolute number,” he said.

Now that freedom is given, Khairy urged everyone not to get complacent and continue to follow the standard operating procedure (SOP).

He said the severity of a possible new wave will not be indicated by the daily cases but by the ability of the public healthcare system to handle the surge.

“Now that interstate travel is allowed, it doesn’t mean the SOP is gone. We must continue to observe the SOP even more strictly, even more widely and must ensure that we remind others that they must also follow the rules.

“My biggest indicator is, as you know, not so much the daily case numbers but it is the stress on the public health system. That is my biggest worry.

“If our public health system cannot handle the surge in cases, intensive care units, ventilators, oxygenated beds and of course admission into hospitals in general for Covid-19, then it’s going to put a tremendous stress not just the public healthcare infrastructure but also on our frontline workers and everyone else working to combat this pandemic. We cannot afford that anymore,” he said.

Khairy said the transition into endemicity takes a whole-of-society approach and that everyone needs to play a part so the country successfully achieves that status.

He said the country is still far from endemicity.

“Now the responsibility is on you. If you really, really value and appreciate what the frontliners have been doing for the past one and a half years, you will be responsible, you will be self-aware.

“You’ll ensure that you will take care of your health and health status to ensure that a surge doesn’t happen again.

“It takes the whole society to ensure we can transition out of this pandemic, reopen safely and one day treat Covid as an endemic disease.

“Not yet. We are far from endemicity. Don’t get me wrong. We are not endemic yet. We are transitioning out,” he said.

Although Covid-19 testing is not compulsory, Khairy urged the public to follow the TRIIS measure (Test, Report, Isolate, Inform, Seek) as the country transitions from pandemic to endemic. TMI

Allowing interstate travel once 90 per cent of adults are vaccinated is the right move, says KJ 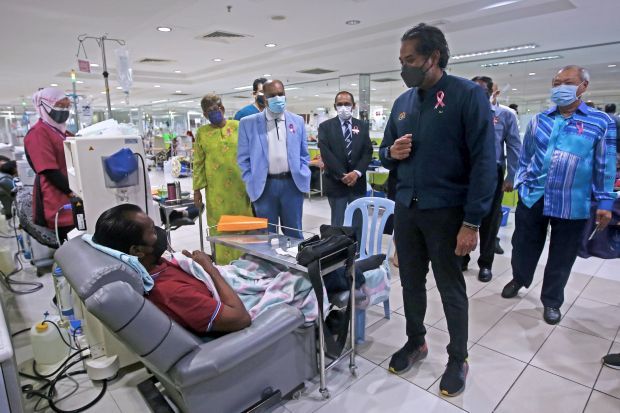 SEREMBAN: The decision to allow interstate travel once 90% of the adult population is vaccinated against Covid-19 is the right one as further delaying this could lead to a host of other problems, says Khairy Jamaluddin.

The Health Minister said the authorities cannot afford to wait for 90% of the total population to be inoculated before allowing this as suggested by some medical experts as this could cause some Malaysians who have not met their loved ones for some time now to suffer further mental and emotional stress.

“If we are to wait till 90% of the entire population is vaccinated, we will only be able to reopen state borders next year or in the middle of next year.

“Our vaccination programme has been quite widespread with almost 90% of the adult population and 65% of the total population fully vaccinated and I feel it is the right time to do so.

“The time is also right as the vaccination rate for adolescents is also expected to reach 80% in the next one month,” he told reporters after visiting Mawar Medical Centre here on Saturday (Oct 9).

Khairy was responding to media reports quoting medical experts that at least 90 per cent of the total population needs to be fully immunised before restrictions, which include interstate travel, are eased.

They said doing so could lead to a spike in Covid-19 cases.

The experts also said that having 65% of the total population was not enough to protect those yet to be vaccinated.

As of Friday (Oct 8), 89.4% of the adult population in the country have completed their Covid-19 vaccination.

Meanwhile 70.4% of adolescents, aged from 12 to 17, have received at least one dose of the vaccine.

Khairy said it was also not possible to reopen state borders only after 90% of the entire population had been vaccinated as 20% of Malaysians were below 12 years old.

“There is no vaccine for these children yet. No regulators including the United States’ Food and Drug Administration have approved any vaccine for them.

“So, like I said, we are comfortable with 90% of the adult population being vaccinated as further delaying this may bring about other problems,” he said.

Khairy admitted that with increased mobility following the reopening of state borders expected in the next two to three days, there is a possibility of cases going up.

“This is only to be expected as there is no vaccine yet for children under 12.

“So, that is why it is very important that we continue with the vaccination process and continue to strictly adhere to all SOPs,” he said.

He believed that as long as Malaysians strictly adhered to the TRIIS concept which was to test, report, isolate, inform and seek, cases will be kept low.

“I have to trust Malaysians on this.

“Many have not met their loved ones including their aged parents for over a year.

“That is why the government said it felt comfortable to re-open state borders when 90% of the adult population is vaccinated,” he said, adding that those returning to their hometowns should also take extra precautions such as doing self-tests and always observe strict SOPs such as wearing face masks and social distancing.

On a separate matter, Khairy said his ministry will meet with the Election Commission (EC) to discuss the SOPs that should be put in place in the event the Melaka state election is held.

“I briefed the Cabinet on this yesterday and let us wait for their decision if the state election is held or deferred.

“If the Cabinet feels the state election can proceed, then we will discuss the SOPs with the EC,” he said.

To another question, Khairy said he will speak with insurance companies on the criteria used to pick private hospitals to be on their panel.

“I will have an engagement session with these companies. There has to be some clarity on how hospitals qualify to become panels for them,” he said, adding that the process needs to be transparent and fair.

Earlier in his speech, Mawar Medical Centre chairman Datuk Lee Tian Hock said smaller private hospitals were having difficulties being on the panel of insurance companies as they were told they should have at least 200 beds and 20 resident consultants to be eligible.

He also said all ministry licensed private hospitals whose doctors were registered with the Malaysian Medical Council should automatically be on the panel of insurance companies so that patients could seek treatment at any such facility.

Lee said this was important as private hospitals required high capital investment and were highly dependent on being on insurance panels which constitutes between 60% and 70% of their overall income.

Earlier, Khairy was taken on a tour of the Mawar Medical Centre where he officially opened its 18-bed paediatric ward called Wonderland and built at a cost of RM1.2mil.