When Najib Razak became the prime minister, he told the Borneo states – Sabah and Sarawak – that his government was committed to the Malaysia Agreement 1963 (MA63), pledging to protect the rights of the East Malaysians. He said a high-level committee will be set up to discuss the MA63. Sabah and Sarawak leaders applauded and cheered the PM, but nothing happened.

When Muhyiddin Yassin became the prime minister, he also told the Borneo states that his government was committed to the Malaysia Agreement 1963, pledging to protect the rights of the East Malaysians. Like Najib, Muhyiddin also said a Special Council will be set up to discuss the MA63. Again, Sabah and Sarawak leaders applauded and cheered the PM, but nothing happened.

Now that Ismail Sabri has become the prime minister, he too assured the Borneo states that his government was committed to the Malaysia Agreement 1963, pledging to protect the rights of the East Malaysians. Like Najib and Muhyiddin, Ismail too said a Special Council will discuss the MA63. And again, Sabah and Sarawak leaders applauded and cheered the PM.

Yes, every year without fail on September 16 (Malaysia Day), all the prime ministers will promise to resolve issues with Sabah and Sarawak. And every time it will end up with nothing but empty promises. From the day Najib took office on April 3, 2009, Sabah and Sarawak, like cows being led by the nose, will foolishly swallow the hook, line and sinker.

But at the same time, Borneo leaders would whine, moan and bitch until foaming at the mouth that the Malaya has ignored the MA63, the agreement that says Sabah and Sarawak (along with Singapore) were equal partners to the former Federation of Malaya in the formation of Malaysia. Fortunately, Singapore isn’t part of Malaysia anymore, leaving Sabah and Sarawak – squirming.

While Singapore has become an independent state since 1965, Sabah and Sarawak still believed that as two of four founding partners of Malaysia, their autonomy as agreed in the MA63 would be respected. However, over time, the value of MA63 has eroded. In 1976, the agreement was rephrased, reducing Sabah and Sarawak to merely one of the 13 states – not equal partners. 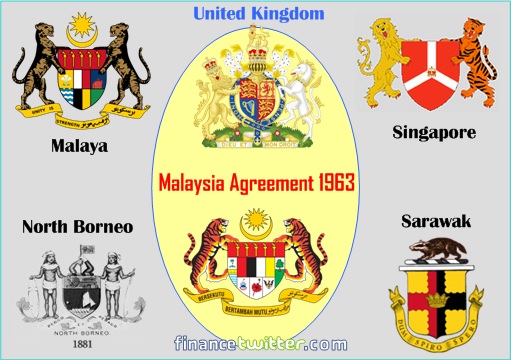 The amendments to the original agreement has allowed the “Malaya” controls and exploits natural resources in Sabah and Sarawak, especially oil and gas. Despite producing 60% of Malaysia’s oil and gas, the two Borneo states receive only 5% of royalties, while the federal government keeps 95% of the revenue. There’s a reason why foreigners think people still live on trees in Sabah and Sarawak.

Since the formation of Malaysia in September 16, 1963, people of Sabah and Sarawak still have difficulties accessing basic needs like water, electricity, healthcare, education and roads. In fact, Sabah had the highest rate of poverty in Malaysia in 2019, making it the poorest state in the country. Despite its huge and rich resources, Sabah’s poverty was at 19.5%.

Sarawak, on the other hand, was ranked third in having the highest number of poor families among all the states in Malaysia, despite Sarawak government’s reserves of RM31 billion. Hence, thanks to creative accounting and corruption, Sarawak is known as “a rich state with poor people”. With a poverty rate of 9%, Sarawak is the third poorest state, after Sabah and Kelantan.

The burning question is – should Sabah and Sarawak continues blaming the Malaya federal government for manipulating and exploiting the Borneo state’s rich resources? Were they not part of the federal government since even independence in 1957? What had the Borneo leaders done to restore not only the Malaysia Agreement 1963, but also their dignity?

Three days ago, former speaker of Dewan Rakyat (Lower House) Pandikar Amin Mulia urged Sabah and Sarawak leaders to stop raising MA63 and instead draw up a new agreement. Pandikar, the same Sabah leader who said during the Najib administration that MA63 was not relevant anymore, is a classic example of traitors who have sold Borneo for projects and position.

Minister in the Prime Minister’s Department (Sabah and Sarawak Affairs) Dr Maximus Ongkili disagreed with Pandikar, arguing that MA63 is very important to Sabah and Sarawak. Yet, Maximus, president of United Sabah Party (PBS, Parti Bersatu Sabah), has been a federal minister since 2004. Instead of opposing Malaya, PBS has chosen to join the oppressor.

It’s not an exaggeration to suggest that Maximus Ongkili, as well as PBS founder Joseph Pairin Kitingan and his brother Jeffrey Kitingan, were the reason why Sabah becomes the poorest state in the country. They would rather sleep with Malaya, of whom they claim to have raped, plundered and exploited the Borneo state’s natural resources, in exchange for ministership. 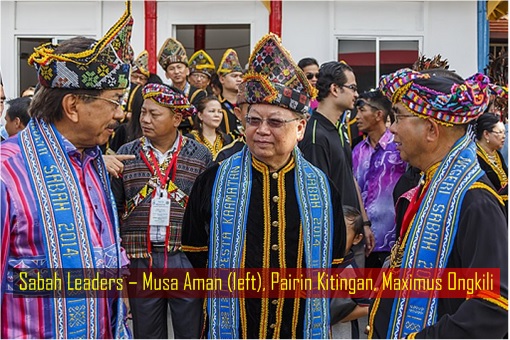 MA63 is not the only complaint voiced out by Sabahans and Sarawakians. Johan Ariffin Samad, a former CEO of state-funded Institute for Development Studies, said the passing of the Shariah Courts (Criminal Jurisdiction) Act 1965 amendment bill, better known as RUU355, will be the beginning of an Islamic state and implementation of ancient hudud laws.

While the hudud laws would theoretically apply to Muslims only, the Private Member’s Bill by PAS president Abdul Hadi Awang is feared to be the first step towards Islamisation or Talibanization of non-Muslims at a later stage. After all, there have been too many incidents, such as body-snatching, where non-Muslims would be at the losing end in any disputes with Muslims in the courts.

During Mahathir’s 22 years iron-fist rule (from 1981 to 2003), and even during his retirement period, he had consistently warned his (former) party UMNO of the grave repercussions of supporting PAS’ agenda to implement hudud punishments in Kelantan. Heck, he had even warned that “Hudud Law” proposed by PAS was unjust and against Islamic principles.

So, what is there to stop the extremists and radicals from forcefully include the brutal hudud laws to non-Muslims just to justify the law as fair to every Malaysian? The Najib, Muhyiddin and Ismail governments have shown that a handful of Malay Muslim elites is able to not only enriched themselves with positions, power, contracts and projects, but also exempted from hudud laws thanks to double standards.

But why are Sabah and Sarawak leaders still complaining about MA63, Islamisation, Talibanization and whatnot when they can solve all the problems by simply withdrawing support for the Malaya federal government? Yes, today, if all the 25 MPs in Sabah (including opposition Warisan’s 8 MPs) unite and withdraw support for PM Ismail Sabri, the Malaya government will collapse.

Likewise, if Sarawak-based GPS’ 19 MPs (there are a total of 31 MPs in the state, mind you) withdraw support today for the federal government, the prime minister will be toppled. If Sabah and Sarawak combined their forces, they would have 56 MPs, powerful enough to demand – even threaten – for the restoration of Malaysia Agreement 1963 (MA63). 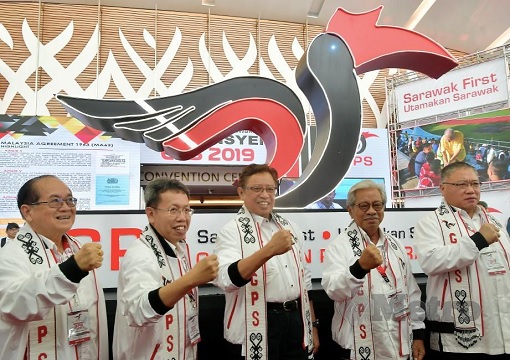 Even if Sarawak Chief Minister and GPS (Gabungan Parti Sarawak) chairman Abang Johari Openg cannot accept Sabah Warisan president Shafie Apdal as the prime minister due to jealousy, a Sarawak Prime Minister can become a reality as soon as tomorrow. What Abang Johari needs to do is to withdraw support to the current fragile government, which has only 114 MPs.

If UMNO president Zahid Hamidi could easily overthrow Muhyiddin regime and restore UMNO government with only 11 UMNO MPs, Openg’s 19 MPs can definitely topple Ismail lame duck government and create history, appointing a Sarawak MP as the 10th Prime Minister. Due to lust for power, UMNO, Bersatu and even PAS will have no choice but to support a Sarawakian premier.

So, what are the Borneo states waiting for? The previous mighty Barisan Nasional coalition was defeated in the 2018 General Election, leaving a divided UMNO and splinter Bersatu constantly scheming, plotting and backstabbing each other for power. Now is the best time for Sabah and Sarawak to restore the MA63, and even nominate one of their own to become a prime minister.

But we can safely predict the Borneo states will be forever ignored and bullied, barking up the wrong tree. Sarawak leader like Abang Johari is not a leader, but a proxy of Abdul Taib Mahmud, the most corrupt former Sarawak Chief Minister (1981-2014) who was promoted as the Governor. If Taib Mahmud did not even care about MA63 during his 33-year-rule, do you think his puppet Openg cares?

As the newly appointed Law Minister, Wan Junaidi Tuanku Jaafar, a senior member of the Parti Pesaka Bumiputera Bersatu (PBB), a party belongs to Taib Mahmud, will have no one to blame but himself and his Sarawak-based GPS alliance if they still fail to fix the decades-old problem of restoring the Malaysia Agreement 1963 (MA63).

In fact, in the 2008 General Election, UMNO would have lost power at the federal level if not for “fixed deposit” Sabah and Sarawak. Under then-PM Abdullah Badawi, Barisan Nasional coalition lost its two-thirds majority for the first time since the 1969 election. It won only 140 seats, of which 41 were contributed by Sabah and Sarawak component parties.

Essentially, without the 41 seats from the Borneo, UMNO and its allies in Malaya (West Malaysia) had only 99 MPs, less than the minimum 111 votes required in the 222-seat Parliament to form a government. But Sabah and Sarawak did not take the opportunity to demand for the restoration of MA63. Today, the government is even weaker with 114 MPs.

Sabahans and Sarawakians should stop complaining. They should condemn their own leaders instead. Abang Johari prefers to keep quiet, as long as the Malaysian Anti-Corruption Commission (MACC) is ordered to close one eye over corruption and illegal logging in the state. Like it or not, the Borneo states deserve to be raped and robbed of its natural resources and MA63 – and even their religions.