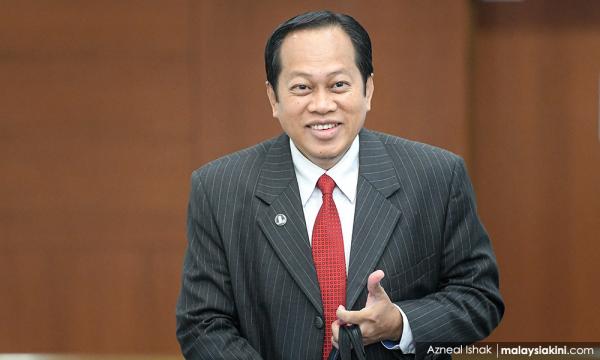 Ahmad is currently standing trial for money laundering and providing a false statement to the MACC over RM2 million he received from then prime minister Najib Abdul Razak in 2013.

Najib was in July last year sentenced to 12 years imprisonment for abuse of power, criminal breach of trust and money laundering involving RM42 million of funds belonging to state-owned SRC International Sdn Bhd. He is appealing the decision.

She had cited the need for a “reset” in Parliament and even proposed an opposition candidate.

However, Nazri had shot down the proposal.

“The deputy speaker position still needs to be filled with a government candidate and we will not make way for the opposition to fill it,” he was quoted as saying by Sinar Harian.

Nazri claimed that the opposition is looking to nominate DAP’s Teluk Intan MP Nga Kor Ming, who was previously also the deputy speaker.

Nazri said the opposition should not be demanding the position when it did not make the same offer when Pakatan Harapan was in power.

“The opposition doesn’t need to talk much about being more open by accepting their candidate as the deputy speaker.

“When Harapan was the government, they did not give much space to us as the opposition,” he was quoted as saying. FREE MALAYSIA TODAY

Guan Eng: Azhar listens to his brother but not the Agong

Dewan Rakyat speaker Azhar Azizan Harun has been urged to explain why the vote of confidence on the prime minister and election of his replacement was not on the Dewan Rakyat agenda.

In a statement today, DAP secretary-general Lim Guan Eng said Azhar and the Attorney-General Idrus Harun, who happens to be Azhar’s elder brother, were both present at Istana Negara on Aug 17 when the Yang di-Pertuan Agong decreed during an audience with heads of political parties that the vote of confidence must be held.

“Unfortunately, the attorney-general had chosen to openly defy and disobey the King by stating openly in an unsolicited public statement that there is no need for a confidence vote because it would nullify the King’s powers to appoint a prime minister.

“Similarly, Azhar had also chosen to follow his brother – not in so many words but through indirect action – by not advising the new government to submit a vote of confidence which he had personally heard from the King,” said Lim, who was also at the Aug 17 audience.

Lim said Idrus’ argument, which contradicted the decree, was difficult to comprehend and that the latter was a “political tool” and unworthy of his position.

In view of this, he urged Azhar to explain why this will not be debated in the Dewan Rakyat.

When contacted for details, Lim said he has been made aware of Zahid’s motion. Zahid’s office did not respond to a request for comments.

Azhar had previously admitted there have been several motions seeking his ouster. However, none appeared in the order paper. Some MPs have claimed that their motions were thrown out on frivolous grounds.