Johor Sultan Ibrahim has every reason to be concerned that investors will not only lose confidence and leave, but also affect the country’s image overseas, not to mention driving away tourists. He was upset over the government’s hastily hatched new conditions for the MM2H (Malaysia My Second Home) programme. Now, foreigners have reasons to dump Malaysia.

On August 11, just days before Muhyiddin resigned as prime minister, the backdoor regime suddenly changed the rules, something which the monarch has criticized as “shifting the goalposts”. The MM2H programme, introduced in 2002, now says foreigners planning to stay in the country must have RM1 million – up from between RM150,000 and RM300,000 – in fixed deposits (FD) in local banks. 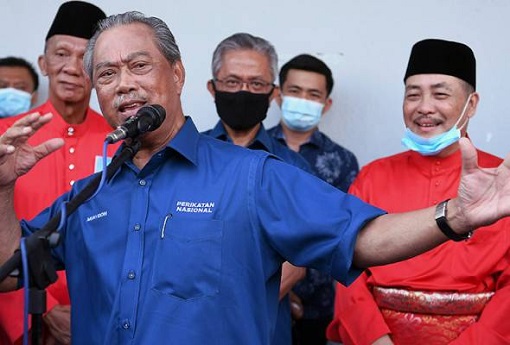 Participants are also required to have an offshore income of at least RM40,000 a month, compared to RM10,000 previously. In addition, they must have at least RM1.5 million in liquid assets (compared with between RM300,000 and RM500,000 previously). The duration of stay before a renewal by the authorities has been reduced to just 5 years from 10 years.

Even the Johor Sultan can see clearly it is a foolish way to raise money for empty national coffers. The government didn’t realize that since the MM2H started, tens of thousands of foreigners have brought in close to RM41 billion – stimulating the country’s economy in every sector, including property, vehicles, education, medical, travel, hospitality, retail, F&B (food and beverage) and entertainment.

But this is just the tip of the iceberg of how an incompetent, corrupt and racist government runs the country. Besides scaring investors, it is incredibly good at chasing talents away. About a week ago, UK-based Malaysian scientist Dr Serena Nik-Zainal was awarded the Francis Crick Medal and Lecture 2022 in recognition of her efforts in cancer research.

In April, Grab Holdings, a company started by two Harvard Business School classmates – Anthony Tan and Tan Hooi Ling – announced its plan to go public in the United States, which values the Southeast Asian ride-hailing and food delivery giant at a mind-boggling US$39.6 billion in market capitalization. It was supposed to be a Malaysian company, but the founders moved to Singapore instead.

The lost of talents or brain drain like scientist Dr Serena Nik-Zainal and young entrepreneurs like Anthony Tan and Tan Hooi Ling to foreign countries are results of more than 60 years of racist and discrimination policy – NEP (New Economic Policy), derived from “Ketuanan Melayu”, the ideology of Malay supremacy espoused by UMNO (United Malays National Organization).

UMNO, whose Barisan Nasional coalition was defeated in the May 2018 General Election, was brought to life after power-crazy Muhyiddin plotted with the party, along with extremist PAS Islamist party, in a political coup and treachery that toppled the democratically elected Pakatan Harapan government in March 2020. UMNO is now back in power, after it betrayed the traitor Muhyiddin.

However, the lust for power among the Malay leaders, regardless whether they were from UMNO, Bersatu or PAS, has created more damages than that they could imagine. By promoting policies based on racism and kakistocracy, instead of multiracial and meritocracy, the country is producing clueless and incompetent leaders, who get worse as a new leader emerges.

The current Covid-19 pandemic, which started to explode after the Sabah state election in September 2020, has never actually been flattened, let alone contained. From 1,000 daily cases, it has ballooned to 20,000 daily infections today, making it one of the “longest” Covid-19 waves in the world. Today, the country has accumulated 1,725,357 cases and 16,382 deaths due to Covid.

Crucially, the prolonging pandemic has started to damage Malaysia’s reputation as one of the hubs for semiconductor, the same way MM2H will affect the country’s image as a destination for retirement. Perhaps the previous clueless Muhyiddin government didn’t realize that the country is one of the world’s top destinations for assembly and testing of computing chips and devices.

While a global shortage of computer chips has impacted everything from smartphones, automotive, video game consoles and medical equipment, many people do not know that besides being the world’s biggest glove producer, Malaysia is also a major centre for chip testing and packaging. Key suppliers like Infineon Technologies AG, STMicroelectronics NV and NXP Semiconductors NV have plants here.

Some of the world’s leading car manufacturers – Toyota Motor, Ford Motor, General Motors and Nissan Motor – have major production cuts due largely to chip shortages from Malaysian factories. For example, Ford Motor has suspended production of its popular F-150 pickup truck at one U.S. plant due to a shortage of a “semiconductor part”, thanks to the Covid-19 pandemic in Malaysia.

While General Motors said it would make 100,000 fewer vehicles in North America in the second half of the year, Toyota said it would cut global production by around 40% in September. As a result, the Japan’s biggest automaker expects to lose 360,000 vehicles of output globally in September alone. Likewise, Europe will lose about 40,000 vehicles.

The cutbacks will affect 14 Toyota assembly plants in Japan and 27 of 28 production lines in Europe. Malaysia’s role is critical because the testing and packaging chips are the last steps of semiconductor production. The screw-up was so mind-boggling that Infineon warned in an earnings call in August that manufacturing bottlenecks in Malaysia are likely to continue to affect its sales in the current quarter.

When STMicro suspended its assembly plant in Muar, Johor, recently due to the pandemic, it could only resume operations after 11 days later. According to the company’s Chief Financial Officer Lorenzo Grandi, the incident will diminish the company’s ability to serve customers and will affect both sales and gross margin in the third quarter.

It’s not hard to understand the frustrations faced by foreign investors in Malaysia. On June 1, the government imposed a half-baked nationwide lockdown, a U-turn in less than a week when then-PM Muhyiddin, through a pre-recorded interview, had told 33 million Malaysians on TV that a total lockdown was out of the question as he insisted the already ailing economy would be destroyed.

Similarly, the clueless Finance Minister Tengku Zafrul Aziz had also said a full lockdown was not possible as 4 million people could lose their income or employment. But after the U-turn, electronics companies were designated as essential businesses and were allowed to operate at 60% capacity. Full production (100% capacity) is only allowed when more than 80% of their workers are fully vaccinated.

However, the rules also say factories must shutdown completely for as long as two weeks for sanitation if more than three workers contract Covid-19. But those rules are just unofficial guidelines. As people continued to condemn the government for opening factories despite daily Covid-19 cases hitting the roof, the International Trade and Industry Ministry (MITI) quietly approved a jaw-dropping 128,150 companies to operate.

But even after a change of prime minister, the new government under the leadership of Ismail Sabri (who was himself part of the old government) still hasn’t a clue how to fix the problem. Factory owners are told to set up their own vaccination centre at their premises. To make life tough for factories, the vaccination centres could only be set up if they have a minimum 1,000 workers.

Exactly why the ministry of health could not pro-actively mobilize trucks or buses to inoculate factory workers is beyond comprehension. Mobile vaccination units can be established easily in industrial areas that have many SMEs, which have fewer than 1,000 workers each. It’s not rocket science that it would be a challenge to set up an acceptable environment in factories to facilitate vaccination.

Any minor disruptions can dramatically change the delivery timelines in a factory, especially in a sensitive semiconductor plant. Globetronics Technology Bhd, a local semiconductor company which assembles sensors for a U.S. smartphone maker and basic car components, closed two of its factories for several days in June after three workers tested positive for Covid-19.

It would, however, take about 4 weeks for its delivery process to return to normal. Its Chief Executive Heng Huck Lee said while the employee safety was his priority, the temporary shutdown to sanitize the factories was a nightmare. Hundreds of workers had to be isolated. He said – “This wasn’t a disaster in terms of revenue, but it caused serious disruption.”

According to data from MITI (Ministry of International Trade and Industry), electronics and electrical products account for 39% of the country’s total exports. And about 7% of the global supply of semiconductors goes through the country. In fact, according to U.S.-based Semiconductor Industry Association, the U.S. imports more chips directly from Malaysia than from any other country in the world.

That speaks volumes about the importance of Malaysia as a major semiconductor packaging hub in the world. But a series of blunders – deliberately and politically committed by the previous Muhyiddin administration to cling to power – have turned the country upside-down. U-turn policies and flip-flop SOPs were made abruptly to suit the politicians, rather than the business community.

Hence, when the global economies started to recover in early 2021, leading to a sudden demand in chips and semiconductor, the country was ill-prepared largely because the government was too busy playing politics than anticipating a global business recovery. There has been a huge demand for home appliances, computers, ventilators, thermometers, and other medical devices.

Wong Siew Hai, president of the Malaysia Semiconductor Industry Association, said the problem in the country is that demand exceeds full capacity while most factories are still running below their capacity. To make matters worse, staff shortages due to quarantine requirements have compounded the problems of factories that operate at 60% capacity.

What the previous Muhyiddin regime, and the current Sabri administration, has failed to understand is that semiconductor packaging and testing operations actually depend heavily on human beings compared to chip manufacturing, which could be automated. They’re now paying the price for ignoring mass testing for Covid-19, which should have been carried out in April 2020 – more than 17 months ago. 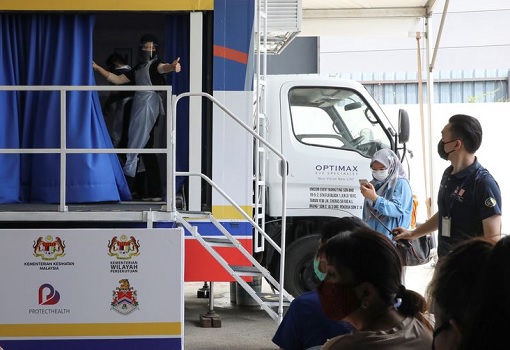 The anger and frustrations faced by German semiconductor like Infineon Technologies was the reason why the Malaysian-German Chamber of Commerce and Industry (MGCC), along with the Japanese Chamber of Trade and Industry Malaysia (JACTIM) and the Malaysian-Dutch Business Council (MDBC) had written to express their displeasure over Muhyiddin government’s half-baked SOPs.

The German investors, in its complaint letter dated July 8, 2021 addressed to then-PM Muhyiddin, expressed its worry and concern about confusion with the Covid SOPs and inconsistent enforcement. The foreign investors have already warned about job losses in Malaysia if they pull out and relocate to other countries. If the current situation continues, there will be nothing left to stop them from leaving.