PETALING JAYA: Pejuang has denied backing Muhyiddin Yassin as the prime minister, adding that a statement being shared widely on social media was fake.

Pejuang president Mukhriz Mahathir said the party also did not want to comment on the latest political developments as its focus was on the rakyat.

“We share the same view as the Yang di-Pertuan Agong in that there is a need to focus on the current health and economic crises in the country.

“That is why Pejuang suggested the formation of a national recovery council by mobilising experts to solve the problems that the country is facing,” he said. 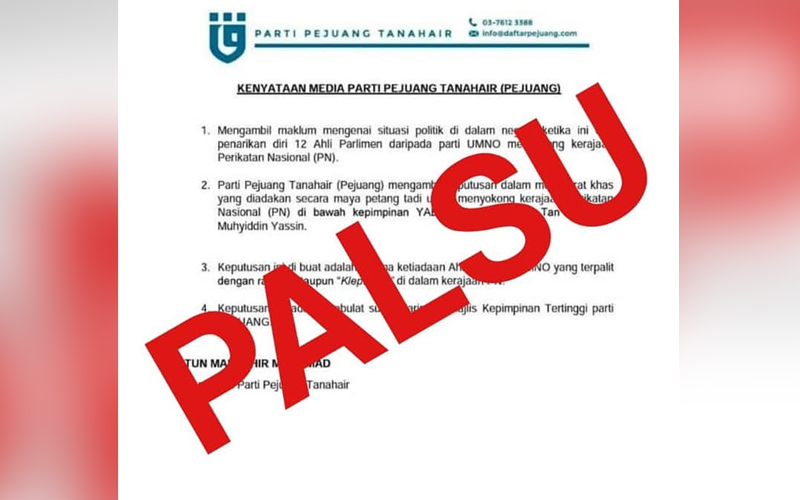 Mukhriz added that there was therefore no need to comment on the latest political developments triggered by various political leaders, alluding to Umno’s pullout from the Perikatan Nasional-led (PN) government earlier today.

The statement which Pejuang said was fake, was said to have been signed by party chairman Dr Mahathir Mohamad. It stated that the reason the party was backing the government was because it had no Cabinet members with corruption charges against them.

The Supreme Council member said Ahmad Zahid Hamidi’s statement was in line with the party’s constitution to uphold the Federal Constitution.

Azalina, who is also the Dewan Rakyat deputy speaker, said she will support the Supreme Council’s decision to back the King as the monarchy is seen as the protector of the people.

Earlier today, Zahid said the party was withdrawing its support for both the PN-led government and Muhyiddin.