You Can Hide Covid Cases, But You Can’t Hide Deaths – All Signs Show Healthcare System Has Collapsed

In a televised address on January 11 to announce the MCO 2.0 lockdown, the power-hungry Muhyiddin said health ministry facilities can no longer cope with over 2,000 new cases per day. The traitor who betrayed his own Pakatan Harapan government said 15 government hospitals were seeing utilisation rates of more than 70% of non-intensive care unit (ICU) beds.

Apparently, the bed occupancy rate at ICU to treat Covid-19 patients had reached 100% for the Kuala Lumpur Hospital (HKL) as well as Universiti Malaya Medical Centre (UMMC), while Sungai Buloh Hospital had reached 83% of its total capacity. To make matters worse, more than 1,450 medical officers or frontliners at hospitals nationwide had been infected or ordered to undergo quarantine.

The third wave, triggered by Sabah state election in September 2020 as a result of the regime’s greed for power, saw a total accumulated 555 deaths on that day (Jan 11, 2021). For the first time, the prime minister confessed that under his leadership, Malaysia recorded more than 100 deaths per month from October to December. But it was just the beginning.

Make no mistake. Mr Mahiaddin was not sorry for single-handedly killed 555 innocent people due to his mishandling of the pandemic. It was part of his political drama to justify a State of Emergency, which he happily declared the next day (January 12) because he had lost his simple majority support in the Parliament after some UMNO MPs withdrew support for him days earlier.

The prime minister was more than happy to let the pandemic deteriorates just to cling to power, even if that means thousands of people will die in the process. Today, facts and figures have proven that not only the emergency rule did not help in containing the virus, but it actually makes the situation worse. Armed with the absolute power where he cannot be challenged, the regime did nothing – until it was too late.

More importantly, the number of patients currently warded at Intensive Care Units (ICU) nationwide has skyrocketed to 1,016 people, where 529 patients needed breathing assistance. Total deaths have jumped to 8,551 today, compared to 555 on January 11, the day the illegitimate and brutal government of Muhyiddin announced a half-baked MCO 2.0 lockdown. 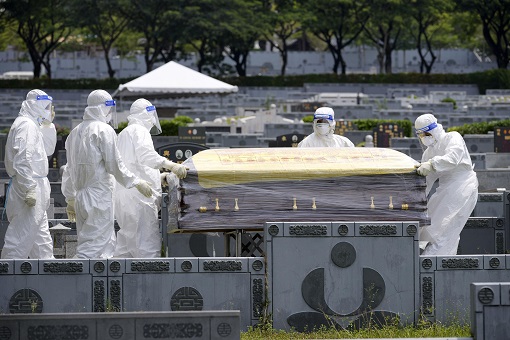 Here’s a mystery many probably have overlooked. If the prime minister claimed that the healthcare system was already at breaking point with 2,000 new cases in January, how could it still not collapse till today, even with 17,000 daily new cases – 8.5 times more? Has the government built 8 times more hospitals within the last 6 months?

Exactly how could Kuala Lumpur Hospital (HKL) and Universiti Malaya Medical Centre (UMMC) operate at 850% capacity today, not to mention Sungai Buloh Hospital operating at 500% capacity, based on the 8.5 times factor? Curiously, early this month, the Health Ministry said the hospital bed capacity in the Klang Valley for Covid-19 treatment has only reached 85%.

Did Muhyiddin lie in January when he said the health system was on the brink of collapse so that he could trick and scam King Sultan Abdullah to grant him absolute power under the pretext of fighting Covid-19? Or did the government lie today when it keeps quiet about the actual status of the health system? Has the healthcare system already collapsed, but is being covered up?

Whilst the Ministry of Health can cook, hide and manipulate data concerning daily Coronavirus infections, it’s harder to hide about the deaths as a result of the collapsed healthcare system. Bowie Kong revealed today how his 56-year-old father, Kong Wan Hong, was denied not only oxygen support, but also a bed or blankets or even a meal at Serdang Hospital.

Mr Kong, who received his first dose of Sinovac vaccine on June 27, was tested positive for Covid-19 on July 15. He was admitted to Serdang Hospital on July 20 after a persistent fever. Two days later (July 22), his consistent deteriorated and eventually died (classified as a Category-4 case). He was only given oxygen on the night of his death.

There have been dozens of reports of teary health-care workers describing overwhelmed hospitals in the Klang Valley struggling to keep Covid-19 patients alive amid shortages of staff, oxygen supply, ventilators and medication. Netizens too have shared pictures and videos of similar overwhelmed hospitals as well as exhausted medical workers on the social media.

One video showed at least a dozen patients on chairs sharing oxygen supplies meant for a single patient in the emergency department of Tengku Ampuan Rahimah Hospital (HTAR) in Klang. Another showed bodies of Covid-19 victims being placed in a holding room as morgues overflowed. HTAR was one of many hospitals that have converted parking lots into emergency units.

It was only after videos and photos of Covid patients “parked” outside HTAR’s emergency department in order to accommodate more patients that went viral that Prime Minister Muhyiddin reluctantly paid a visit to the hospital, pledging to add 15 ventilators and 151 beds. But as it turned out, the premier was not impressed with the bad publicity projected on his incompetent government. 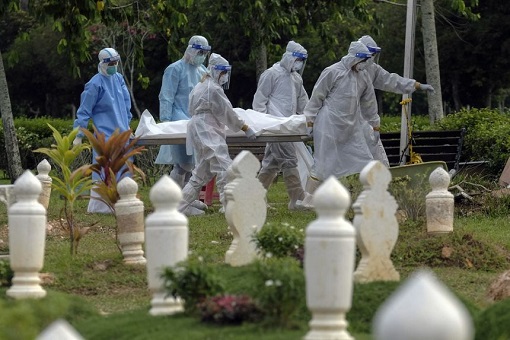 Immediately after the prime minister’s PR exercise at the hospital, the top management of HTAR issued a warning to its employees against sharing photos and videos. According to a notice dated July 14, barely 24 hours after Muhyiddin’s visit, HTAR director Dr Zulkarnain Mohd Rawi threatened that disciplinary action – including dismissal – could be taken against staff for breaking the rule.

The HTAR director argued that the recent photos and videos shared on social media has caused public anxiety, which in turn has tarnished the government’s image. However, Dr Zulkarnain’s despicable act was too late. Several anonymous medical frontliners have shared their horror experiences via audio recordings, describing how Covid cases and deaths are being under-reported.

The audio exposed that at least 1-in-10 Malaysians are infected with Coronavirus – meaning today’s total cases are 3.3 million, instead of just 1 million. Apparently, the daily death toll announced does not include patients with Covid-19 who died from another condition. A frontliner said – “You want to imagine what’s happening in Malaysia? We’re already in Italy 2020. We’re already in India 2021.”

Hospital beds, according to the whistleblowers, have been prioritised for high-risk patients like the elderly since three to four months ago, while other Covid-19 patients “have to settle for plastic chairs”. Contrary to Health Minister Adham Baba’s claims that everything is rosy, hospital wards are full, while equipment like ventilators and oxygen canisters are insufficient.

The frontliners said – “Some patients might be required to share oxygen with five other patients. There are some patients who may deserve to be intubated, but we cannot intubate because we have breached our capacity. Instead of doing their jobs, nurses have to liaise with transport people to get oxygen replaced every two hours because there’s only so much one canister of oxygen can do.” 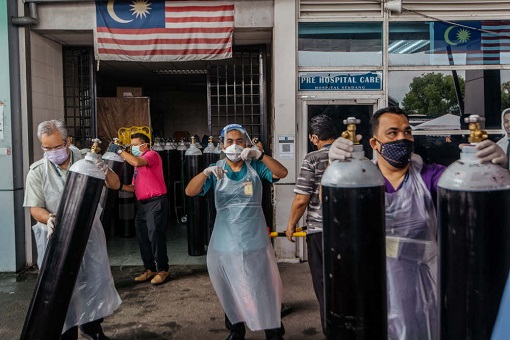 The audio recordings, part of #BangsaMalaysia project, revealed how the Ministry of Health constantly issued warnings to medical staff not to make any public statements on social media. A worker said – “Right now, every time we try to expose it, they will tell everyone in the mass media that the situation is under control when we are like, hello, we are drowning here.”

When Malaysia reported 207 deaths from Covid-19 on Tuesday (July 27), 31 of the victims were classified as “brought in dead” to hospital. It was already bad that the country has a total 1,028 active clusters. It’s worse that almost everyday there is DOA (dead on arrival). In fact, as early as October 28 last year, 44 positive Covid-19 cases were categorized as brought in dead (BID).

Based on the charts, the number of Covid-19 fatalities in the country began multiplying in April. The double-digit of victims brought in dead suggests that not only the hospitals are overwhelmed, but also that the ambulance service has been crippled as early as December 2020 when Health Director-General Dr Noor Hisham Abdullah told people to just quarantine at home.

As much as the clueless and incompetent Muhyiddin government tries to cover-up, photos of dead bodies stacked at hospitals are not only real, but demonstrates that the healthcare system has collapsed weeks, if not months, ago. Undertaker Muhammad Rafieudin Zainal Rasid now handles as many as 30 Covid-19 funerals a day, when he handled only 1 funeral in 1 to 2 weeks last year.

And it will only get worse. Malaysia had 234 Covid-19 deaths in April, only to hit 1,290 in May, before skyrocketing to 2,374 deaths in June, despite “total lockdown”. Mr Muhammad Rafieudin said – “The authorities told us they expect a rise in the number of deaths over the next three to six months, with 120 a day just in the Klang Valley alone, and 200 to 300 a day nationwide. This is worrying.”

He told Straits Times – “Some bodies have to be kept in the morgue for three or four days. Yesterday, we had a case of a Covid-19 patient who died at home and the hospital could not collect the body for more than 12 hours due to a lack of staff or ambulances. The family could not do anything because they were under quarantine. This is what is happening.”

To make matters worse, cases of suicide have also climbed due to Muhyiddin’s economic mismanagement. Kelvin Teh, another undertaker, said – “Since the pandemic, the number of people dying has increased. Some of them committed suicide because of financial problems. We handle an average of one to three deaths every day and more than 20 deaths every month.”

Like it or not, all signs point to a breakdown in the health system. Just because you don’t see people dumping dead bodies into the river like in India does not mean Malaysia’s healthcare infrastructure is still intact. If you multiply by a factor of 40 to match India’s population of 1.38 billion, Malaysia’s daily infections are actually 696,200 cases, higher than India’s peak of 400,000 daily cases in May.   FINANCE TWITTER

PETALING JAYA: No amount of fuss kicked up in Parliament could bring back those who died from Covid-19, says Najib Razak in again defending his supposed silence in the Dewan Rakyat.

Neither could such “noise” protect Malaysians and guarantee that life would go on, the former prime minister said in a Facebook post tonight.

The Pekan MP added that there was also no point in creating a ruckus in Parliament without offering any solid suggestions to improve the situation.

Najib then took a veiled jab at former minister Syed Saddiq Syed Abdul Rahman who had berated Umno for failing to take the government to task despite being critical on social media.

“Where’s Umno? In social media, they make so much noise, but in the Dewan Rakyat, they’re all quiet, they don’t say anything,” the Muar MP was quoted as saying after the proceedings on the first day of the special sitting in Parliament on Monday.

However, Najib said that wasn’t his way.

“As the saying goes, ‘empty vessels make the most noise’.”

Najib went on to say that there was also no need for one to spend hours defending their “achievements” or criticising others at length.

He said it was better to instead offer constructive criticism or effective suggestions.

“We have work to do. We are not here just to make noise.”

On Monday, Najib defended himself against criticism for his apparent silence, saying he was not usually the noisy one in Parliament, quipping that he was not “Jelutong or Lid” – referring to Jelutong MP RSN Rayer and Shah Alam MP Khalid Samad.

He also said there was no point in going all out to defend the government or to just criticise Putrajaya, adding that what was needed was leadership to overcome the health and economic crises.  FMT