This is the second time fresh infections have exceeded 13,000 cases.

The highest record was on July 15 where 13,215 new infections were registered.

The climb today was largely contributed by a surge in Selangor and Kuala Lumpur.

Selangor saw new infection rise to above 6,049, the second time the state saw more than 6,000 new cases in a day.

Kuala Lumpur reported 1,611 new cases, the third-highest on record for the federal territory.

Rep fumes over patients sleeping on the floor, wants minister’s head to roll

Seri Kembangan assemblyperson Ean Yong Hian Wah has demanded answers over a Facebook post with heart-wrenching videos of patients in makeshift tents, with some sleeping on the floor.

The post claimed that the videos were recorded at Serdang Hospital, but there has been no confirmation on this matter from the authorities.

Calling on Health Minister Dr Adham Baba to explain if this is true, Ean lamented that the videos made Malaysia appear like a Third-World nation.

“Unfortunately, the people under the governance of Perikatan Nasional have to go through this, which hasn’t happened since independence,” he added in a statement.

The DAP assemblyperson also reiterated his call for Adham to be replaced, claiming that the latter is unfit to helm the Health Ministry.

“I once again urge the federal government to appoint a new health minister.

“The people don’t want to wait for incidents such as (the one) at Tengku Ampuan Rahimah Hospital (HTAR) Klang to happen – only when the prime minister visits, the new beds will come. This approach is incorrect and unprofessional.

“It has been 24 hours since the videos went viral. Until now, nobody from the PN government is capable of answering or providing solutions to this problem,” Ean added.

According to the viral post, the videos were recorded by a Covid-19 patient who was admitted to the hospital yesterday, after suffering breathing difficulties.

“The hospital is out of beds, many patients were placed in makeshift tents outside. There is not enough drinking water, and the toilets are dirty. Some of them (in the tents) did not get a (canvas) bed or mattress.

“She (the person who recorded the videos) had to look around the hospital (for something to sleep on) and found a piece of cloth to lie down on,” read the post.

Contacted by Malaysiakini today, the patient, who requested anonymity, said the situation had improved since the videos went viral.

She said there were now fewer patients who had to sleep on the ground. However, some had to contend with sleeping on plastic chairs.

Meanwhile, the Facebook post claimed that hospital authorities prohibited patients from taking photos or recording videos. They were also told not to video call family members.

Earlier this month, the Health Ministry announced additional support for hospitals in the Klang Valley, which is the current epicentre of the outbreak in Malaysia.

This included mobilising 6,500 healthcare workers from other states, purchasing more supplies for public hospitals and working with private hospitals to set up more Low-risk Covid-19 Quarantine and Treatment Centres and Covid-19 Assessment Centres. 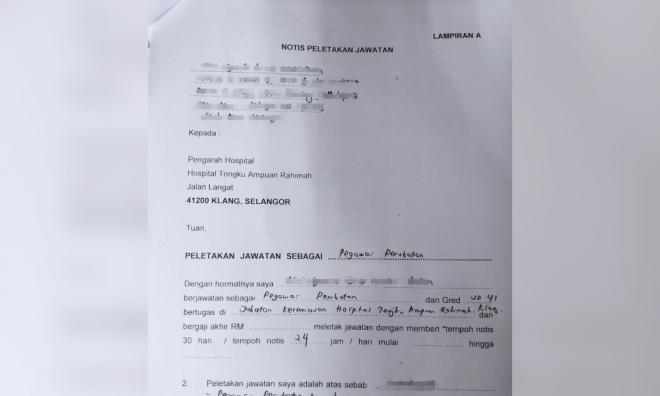 The number of active Covid-19 cases has hit an all-time high, causing a flood of patients at public hospitals, particularly in the Klang Valley.

This has put tremendous strain on already overwhelmed healthcare workers, some of who can no longer take the pressure and are resigning.

At least 15 doctors at a public hospital in the Klang Valley have resigned in the last two weeks, according to a doctor who has also tendered his resignation.

The doctor, who spoke on condition of anonymity, also shared some of the resignation letters with Malaysiakini.

He was confirming accounts by Hartal Doktor Kontrak, a group lobbying for better treatment of contract doctors, that some are leaving due to pressure.

Two of the resignation letters shared were a 24-hour notice by contract doctors.

Among the reasons cited were burnout and gloomy prospects, despite having given their all in fighting against the Covid-19 pandemic.

Hartal Kontrak Doktor too shared some of the resignation letters on Twitter.

“Another 24-hours resignation notice. One by one leaving. Where is the senior management? Do they not know or do they not care?” it said.

Contract doctors at public hospitals face the prospect of losing their jobs after their five-year training.

This is because there is a lack of permanent placements due to the government’s budgetary constraints.

Hartal Kontrak Doktor is planning a one-day strike on July 26 to pressure the government into offering a resolution, but some have given up on the lobbying and left.

The government had on July 12 said a resolution would be announced that week, but nothing came out of it.