May 29, 2021 was one of the biggest turning points in Malaysia. It was the day the country recorded a whopping 9,020 daily Covid-19 cases in the past 24-hour period, then the highest infections since the Coronavirus outbreak last year. And it was because of the infections that Prime Minister Muhyiddin Yassin was forced to eat humble pie and make a humiliating U-turn.

Just days after Mr Muhyiddin pledged not to ever implement a full-scale lockdown like the first Movement Control Order (MCO 1.0) on March 18 last year, claiming that the exercise almost led to a total economic collapse, he stunningly changed his mind. Heck, he had even joked that the only way he would lock down the entire nation again is when someone gave him half a trillion Ringgit.

With tail between legs, the arrogant and clueless prime minister announced on May 28 that a nationwide lockdown would be enforced from June 1 to 14. Having surpassed India in terms of Covid-19 new cases per million people, the death toll on that day – 98 deaths – had also effectively pushed Malaysia to snatch another trophy from India in the category new deaths per million.

More importantly, King Sultan Abdullah and all his ruler brothers could no longer look the other way. The 2,000 daily Covid cases before the state of emergency was declared on January 12 had skyrocketed to as high as 9,020 daily infections on May 29. A week later, news flashed about special meetings between the Agong (King) and political party leaders, including the Oppositions. 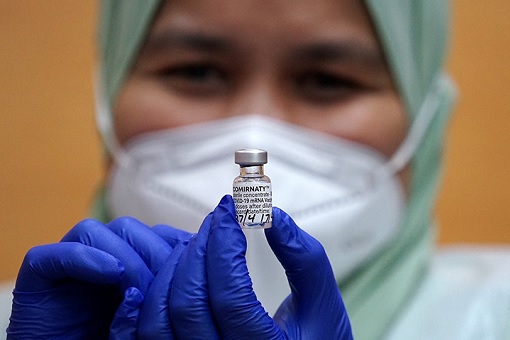 Prior to May 29, the vaccination rate was at a pathetic 50,000 jabs daily. Only 5.7% of the population had received at least one dose of Covid vaccines, while merely 3.2% were fully vaccinated. However, a few days after May 29, the backdoor prime minister realized he can no longer play the game of deliberately prolonging the vaccination to stay in power.

Thereafter, the vaccination rate suddenly skyrockets. From 65,396 jabs administered on May 29, the country saw a new record of 460,158 shots last Thursday (July 15). Yesterday, 30.7% or 9.81 million people had received at least one dose of vaccines, whereas 14.2% (4.53 million) received the full two doses. This statistic alone suggests the vaccination programme has been manipulated.

Besides manipulating vaccination to cling to power, there was also the evil scheme to benefit financially from the programme. Every single point in the supply chain of the deliverable of the vaccines, the corrupt Perikatan Nasional ministers will find ways to profit from it. The trick was to artificially create shortages of vaccines in the country in order to create demand.

In truth, before May 29, there had been many rumours about the availability of Covid-19 vaccines in the black market. There were even stories about some Malaysians residing in the U.S. who had called friends and relatives back home to enquire about a so-called private sale of vaccines at an international school in Ampang. They were willing to pay to get their parents vaccinated.

Similarly, in the state of Selangor, some factory owners were said to have paid RM198 per dose of Covid vaccine for their workers. It was not rocket science that money used to continuously pay for swab tests, not to mention the endless “money under the table” demanded by corrupt authorities, would be better spent to vaccinate their factory workers.

Hence, when the national Covid-19 Immunisation Task Force (CITF) said it is investigating several cases of empty syringes being used to administer vaccines, it’s actually a classic example of not only corruption, but also part of the greedy scheme to make dirty money from the vaccination programme. Like it or not, this is just the tip of the iceberg.

CITF said the first case happened last Saturday (July 17) at a drive-through vaccination centre at Sungai Petani airport camp in Kedah, which was set up for the armed forces personnel and their family members. Another two incidents involving empty syringes happened at the Malaysia International Trade and Exhibition Centre (MITEC) in Kuala Lumpur (July 17) and Bangi Avenue Convention Centre (July 18).

People were amused when an Italian woman was mistakenly given 6 doses of the Pfizer-BioNTech vaccine. But in Malaysia, such a lucky incident will never happen. Instead, Covid-19 vaccines are treated like a gold mine, where every single dose could be stolen and sold for fast cash in the black market. What are the chances that the healthcare workers had forgotten to load a syringe with the vaccine? 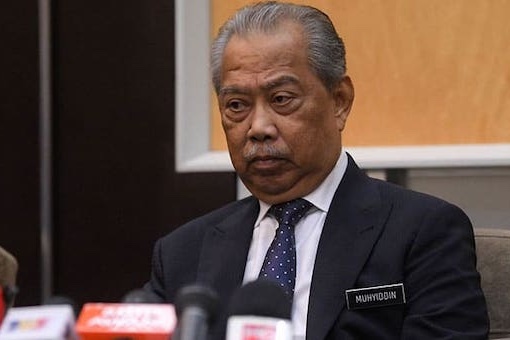 In the incident at MITEC, the recipient, Tan Wing Sam, was supposed to receive his first dose of Pfizer Covid-19 vaccine. Suspiciously, his request to record a video before the vaccination process was rejected by the healthcare worker. He said – “All she did was just jabbed in and pulled out without any effort of pushing the vaccine out of the syringe into my body.”

The best part was when Mr Tan confronted the nurse whether she had administered the shot properly; she immediately offered to give him another jab if he wanted. Exactly how could a healthcare worker easily offer another shot without alerting the supervisor as part of an inventory control procedure is beyond comprehension. After her dubious jab was exposed, the nurse apologised.

Likewise, in a similar case at Bangi Avenue Convention Centre, Mr Ariff was treated to a magic show when the healthcare worker showed him an empty bottle of Sinovac vaccine while busy explaining about the Chinese manufactured vaccine. Only after realizing the trick didn’t work that the worker quickly apologized and reached for a new vaccine vial from an ice box.

And like Mr Tan, the despicable healthcare worker had also rejected Mr Ariff’s request to record a video of the process. The trick is pretty simple. Every single vaccine vial not administered is a vial saved to be sold, probably for RM50 a pop. After all, how difficult it is to hide a couple of vials in the healthcare worker’s pockets?

The greedy workers probably thought that it won’t hurt if the recipients missed their first dose as they would get their second dose anyway. But the worse part is, such heinous crime is beyond a simple thievery of Covid vaccine. Not only it creates a false sense of security, such irresponsible healthcare workers should be fired and charged for putting lives at risk.

In reality, not all of the 9.81 million people who had received at least one dose of vaccines were as alert as Mr Tan or Mr Ariff. At least 2-million people aged 60 years and above nationwide have been vaccinated. They likely would look away rather than record the vaccination process. Even if just 10% of them had been scammed, there are 200,000 elderly people given questionable doses of vaccines. 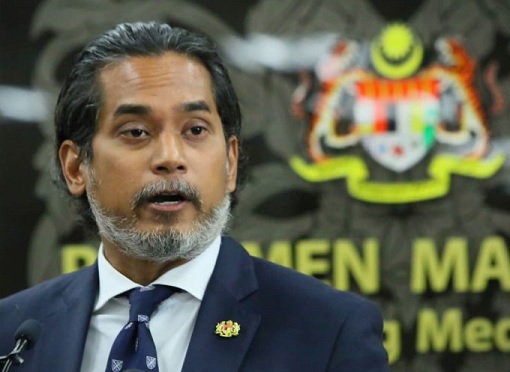 The numbers would become astronomical if we apply the 10% dubious Covid-19 jabs on the 9.81 million people who are supposed to have been given at least one dose. Yes, while the healthcare workers, most likely under a syndicate linked to the Ministry of Health, have made a cool RM50 million out of 1 million unsuspected recipients, there’re 1 million people potentially at risk because they have zero protection.

Get real, such scheme does not merely involved low-ranking healthcare workers. It’s not like the stolen vaccines can be resold like some exotic fruits in the morning market. They have to be collected, distributed and delivered to the mastermind in the black market, which will then be sold to desperate buyers, companies or factories.

The thievery of vaccine had been reported as early as May. Back then, videos of under-dose AstraZeneca vaccine at the Kuala Lumpur World Trade Centre (WTCKL) had gone viral. But the corrupt government of Muhyiddin conveniently rubbished the allegations as human errors. Now, it appears that the thieves have since graduated from stealing half a dose to a full bottle of vaccines.

The simple fact that the CITF has promised to take only disciplinary action against the healthcare workers caught red-handed suggests that the government was not serious about sending the correct message. This scandal did not just pop up out of the blue. It happened because the entire system is tainted, thanks to 60 years of corruption under the previous Barisan Nasional government.

Now that Barisan is part of the backdoor Perikatan Nasional, the corruption continues, so much so that even healthcare workers did not see anything wrong to quietly steal some Coronavirus vaccines to make a fast buck. Coincidentally, both Vaccine Minister Khairy Jamaluddin and Health Minister Adham Baba are warlords of UMNO, the corrupt political party behind Barisan Nasional.

The rot starts at the top. While the big guns like ministers make their millions from mega vaccination centres (PPV) under the pretext of avoiding overcrowding in smaller centres, as well as partnership with Pharmaniaga through monopoly in vaccine distribution, the small fish like the healthcare workers happily gobbled up crumbs – siphoning vaccines from innocent people. – FINANCE TWITTER

PETALING JAYA: Malaysia’s failure to manage Covid-19 and the economy is not only an indictment of the Perikatan Nasional-led government, but also the country’s refusal to recognise talent over the years, says a former minister.

“We are in an unprecedented crisis today, and what do we still see in the news? Race, religion and political patronage, things we used to see in the 1980s; it isn’t going to save us from the bigger issues we are facing now,” he told FMT.

Zaid said it was sad that the country appeared to have learned nothing from the failures of the past.

He said the current social media label of “Kerajaan Gagal” being used against Prime Minister Muhyiddin Yassin’s administration reflected the lack of talent at the highest levels which stemmed from the continued promotion of policies and practices which encouraged mediocrity.

“Even during the pandemic we still see groups making demands on the basis of race, we still see politically motivated appointments that do not add value to the country,” he said.

Last month, two medical groups had proposed that recruitment of new medical graduates be reviewed to ensure that Bumiputera graduates could serve in permanent positions in the health ministry.

On the politically motivated appointments, Zaid said many ministers and deputy ministers, in what he called a bloated Cabinet, had been appointed not on merit or expertise but for the sake of political expediency.

It was time that Malaysians, not just the government, changed their perspective, he said.

“Meritocracy makes sense, we need to get the best person for the job regardless of their race, religion or political beliefs. We must not have our hands tied by a lack of competence.”

Zaid said Malaysia was already lagging behind some of its regional neighbours and Covid-19 will only exacerbate that gap.

“Meritocracy must be the driving force for this country. In fact, to me, the biggest losers from a lack of meritocracy are the Malays themselves because it hinders them from benefiting from policies aimed at promoting excellence.”

He said that in the past, certain Malay champions were chosen to help the community but lacked the knowledge and integrity to do so.

“As a result, many Malays were doomed from the start, because they were led by incompetent people who were favourites of the ruling elite.” – FREE MALAYSIA TODAY