PETALING JAYA: The enhanced movement control order (EMCO) in all localities in Kuala Lumpur will end tomorrow as scheduled.

However, it is uncertain when the lockdown will end in most of Selangor, which like the localities in Kuala Lumpur, were scheduled to be under an EMCO from July 3-16. 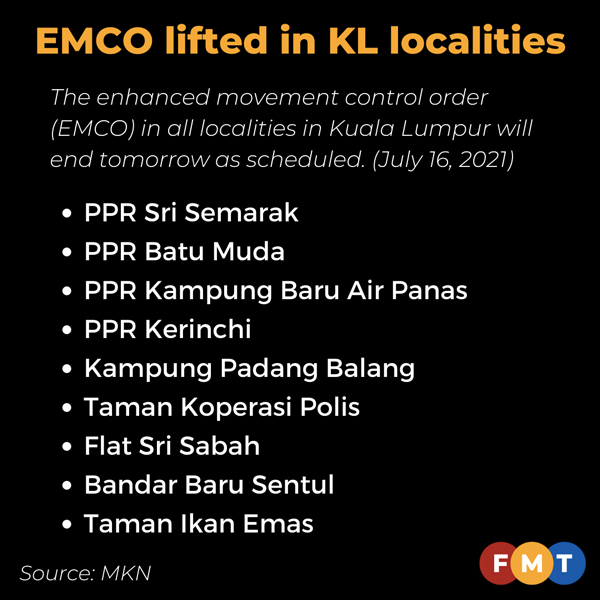 The EMCO at six other areas in Kuala Lumpur ended on July 10. The areas are Kampung Batu Muda, Kampung Puah, Taman Koperasi Polis (Phase 1), Flat Section 1 and 2 in Wangsa Maju and Flat Desa Pandan – including Baiduri and Delima.

Except for Sabak Bernam, all other districts in Selangor are currently under an EMCO.

Meanwhile, the EMCO at Mukim Kuala Kuantan 1 and 2 in Pahang is also set to end tomorrow.

Several areas in Sabah will be placed under an EMCO from July 17-30.

In Kerian, Perak, Kampung Tersusun Pondok Tanjung, Kampung Binjai and the Tropicana Bukit Merah apartments will also be placed under the EMCO from July 17 to July 30.

Also in Perak, the EMCO at the Latexx Manufacturing Sdn Bhd factory and its workers quarters in Taiping will be extended from July 17-30.

The EMCO at Taman Mewah in Alor Gajah, Melaka, as well as Taman Jaya Diri in Kota Kinabalu will also be extended from July 17-30.

KUALA LUMPUR— The government is allowing stores selling computers, telecommunications devices, stationery and books to operate under Phase One of the National Recovery Plan (NRP) alongside other essential sectors approved by the National Security Council (NSC) starting tomorrow.

Deputy Prime Minister Datuk Seri Ismail Sabri Yaakob said the decision was made after feedback from students, parents and educators to ensure there is no disruption to the Teaching and Learning at Home (PdPR) programme.

“The Covid-19 pandemic has changed the way daily learning is conducted and all educational institutions have now implemented an online PdPR system.

“The NSC special meeting has today agreed to allow computer and telecommunication shops including book and stationery shops to operate throughout the NRP period from July 16 onwards,” he said in a statement this evening.

The government had barred the sectors mentioned above from opening until the states they were located in transitioned to Phase Two of the NRP.

Ismail Sabri also said the NSC also agreed to allow movement of students from areas currently under an enhanced movement control order and vice-versa on the condition of police permission for the purpose of taking examinations. MALAY MAI;