Two days ago, once-celebrity Health Director-General Dr Noor Hisham Abdullah said the Health Ministry expected the country’s daily Covid-19 to stabilize and show a decline in the next one to two weeks’ time. It was Sunday (July 11) when he made his statement, the day Malaysia reported 9,105 infections, the third consecutive day above the 9,000 mark.

Today (July 13), the same Dr Noor said the Covid-19 cases are expected to increase in a week or two before it stabilizes. Can he make up his mind whether the Coronavirus cases will increase of decline in the next one to two weeks’ time? Exactly how could Dr Noor, supposedly the last man in the government with little integrity left, flip-flops in such a short period of time?

Perhaps he was caught with his pants down over today’s statistic – 11,079 new infections in 24 hours – a new record since the pandemic started last year. He blames increased testing for today’s massive rise in new cases. Did he not know two days ago about the ongoing mass testing or screening? Was he not aware that Selangor and Kuala Lumpur are under EMCO since July 3? 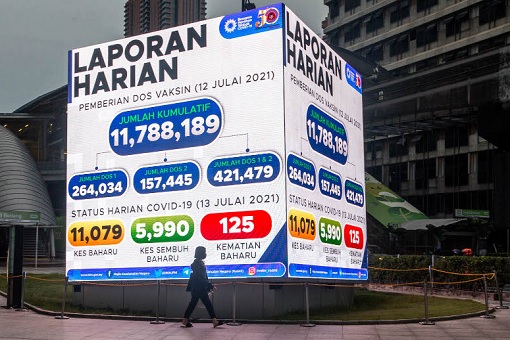 As another 125 people died from Covid-19 and record 972 warded in the ICU (intensive care units) with 456 needed ventilators, the clueless Perikatan Nasional government – consisting primarily of UMNO, Bersatu and PAS – scrambled to cook up more excuses to cover their incompetence and screw-up. Even today, Malawati Stadium in Shah Alam was congested with 4,000 crowds.

The increasingly out-of-touch Dr Noor, thinking he was clever, told the people in the state of Selangor not to only go to the Shah Alam stadium because there are 12 more Covid-19 Assessment Centres (CAC) to choose from. He was quickly slammed. It was not the people’s fault that they were instructed to go to the only CAC in Shah Alam.

Dr Noor was also mocked and ridiculed for forgetting that during the current lockdown, inter-district travel is prohibited. Perhaps the health director-general should start thinking like a professional, and not acts and speaks like a politician. Dr Noor should be reminded that it was he who said in mid-January that it would take 12 weeks for the country to flatten the Covid-19 curve.

Yet, about 24 weeks later today, the situation has become like Covid Apocalypse. From roughly 3,000 daily cases on the day the government imposed half-baked MCO lockdown and Dr Noor said the virus could be defeated within 12 weeks; it has turned for the worse with more than 11,000 daily infections today – almost 4 times more. Not even a State of Emergency could contain the pandemic.

The best part is when Dr Noor lectured the business community days ago that the current MCO 3.0 has helped keep the number of infections down, hence is a huge success, contrary to public opinion. He even warned that without MCO 3.0, the Covid infections could hit 13,000 a day. Now that the daily infections are almost 13,000, he suddenly diverts the blames to increased testing and Delta variant.

But even if it was the increased testing and Delta variant that are wreaking havoc now, why didn’t Dr Noor advice Prime Minister Muhyiddin accordingly? Did he embark on a big scale screening of migrant workers, a promise he made back in April 2020? Did he even know how the Delta spread in the first place? Or has he been sitting on his hands ever since he was awarded “Tan Sri” title on August 17? 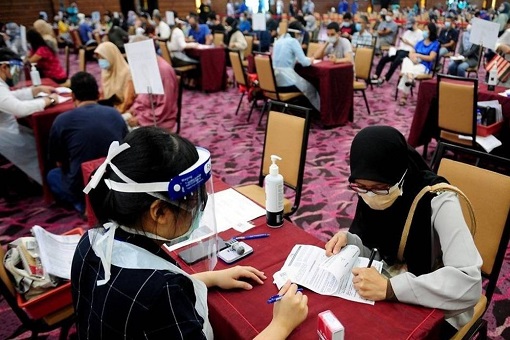 To make matters worse, a whopping 204 out of 453 workers at the IDCC Shah Alam vaccine administration centre (PPV) have tested positive for Covid-19, leading to concerns that those who had their jabs at the IDCC PPV between July 9 to July 12 could be infected. This is the first time a mega vaccination centre has been closed due to internal Covid-19 infections.

Still, Vaccine Minister Khairy Jamaluddin could find the opportunity to score some cheap brownie points, claiming it was his quick decision to close the mega centre that saved the day. Astonishingly, only 88% (400 of 453 workers) of workers at the IDCC have been vaccinated.  Assuming all the unvaccinated workers are infected, it means 151 vaccinated workers have also been infected.

Khairy should explain not only why 151 inoculated workers are still infected, but also why 53 workers were allowed to work despite knowing they have not gotten their jabs. More importantly, Dr Noor, Khairy and Health Minister Adham Baba should explain – transparently – why the daily infections continue to skyrocket despite the escalating in vaccination.

As Finance Minister Zafrul Aziz tries to figure out how the waves of white flags are linked to a failed government, PM Muhyiddin has suddenly recovered from diarrhoea and bragged – again – about Malaysia’s daily vaccination rate being amongst the highest in the world. Muhyiddin said records showed that an increase in the vaccination rate would bring the number of new cases down.

Expressing confidence that the country will enter Phase-2 of the National Recovery Plan soon, Muhyiddin said – “The steps we have taken are quite effective and I’m confident we will be able to overcome this problem”. Hence, he should explain why daily infections repetitively hit new records, despite having administered record high 421,479 doses of Covid vaccine yesterday.

In what appeared to be a PR exercise, obviously due to his prior knowledge of today’s record breaking Covid cases, Muhyiddin paid a visit to the HTAR (Hospital Tengku Ampuan Rahimah) in Klang today. He pledged to add 151 beds and 15 ventilators. But his visit came only after videos and photos of Covid patients “parked” outside HTAR’s emergency department went viral.

Strangely, the prime minister also said that he has ordered Khairy to purchase any available vaccine. Exactly what happens to Pharmaniaga, the sole concessionaire holder or middleman of drugs and medical supply in the country entrusted to supply Covid-19 vaccines, but was reportedly facing problems with bottling and distribution of 14 million doses of Sinovac vaccine?

Last month, Mr Muhyiddin said his government has completed the purchase and payments for all the vaccines required to achieve herd immunity. So, even if there are some delays, which mean the world is facing a shortage, does it make sense to spend more money to purchase more vaccines when there isn’t any available in the market – unless you’re talking about black market?

Should not Pharmaniaga face penalty for late deliveries or breach of contract if the company fails to fulfil its obligation and commitment? Or will the company get to keep billions of Ringgit without even a slap on the wrist, even though it has failed to deliver, and in the process more taxpayers’ money are quietly siphoned to the same company to buy a new batch of vaccines?

Hilariously, Muhyiddin government today set up a special task force with the objective of making “quick decisions”. So, does that mean the National Security Council (NSC) has been shaking balls all this while? The decision to establish a new task force proves that not only the NSC and all the ministers are useless and clueless, but also that the half-baked lockdowns are no longer effective.

Like it or not, the virus has spread beyond control. A lockdown is only effective to contain a certain district or states before an outbreak spreads. That’s why the MCO 1.0 introduced last March was effective. Now that the entire nation is infected because of pussyfooting and politicking, a restricted lockdown, let alone a half-baked lockdown, can do very little to fight the pandemic.

The panicked government is running around like a headless chicken now. Everything that they do or say makes very little sense. Thanks to not only its incompetence, but also complacency and arrogance, they have to keep moving the goalpost. They will keep blaming different thing every day – from people violating SOPs to factories to increased testing to Delta variant and whatnot.

Because the Malay-Muslim Perikatan Nasional government plays more racial and religious politics than administers the country and the economy, naturally they underestimated the importance of mass testing and securing vaccines at the early stage. Instead of fixing the root of the problem, Dr Noor chose to do fire-fighting. And now the country is paying the price.

Actually, the government isn’t sure if the newly introduced special task force will be able to do its magic. Without a clear scope of work, it appears the new stunt could be hatched just to show that it is doing something. Exactly what types of “quick decisions” the task force can deliver that the current ministers can’t, especially with the newly appointed deputy Prime Minister Ismail Sabri in charge?