According to a spokesman from the party headquarters, the letter dated June 11 (Friday) purportedly sacking the Sembrong MP and former party vice-president which had gone viral was fake.

“It is fake,” said the spokesman briefly, when contacted. 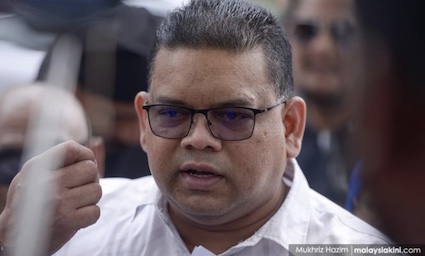 (The Coverage) – Following the Yang di-Pertuan Agong’s summoning of political party leaders to discuss the reconvening of Parliament and the nation’s failure to contain the Covid-19 pandemic, it may appear to some that Tan Sri Muhyiddin Yassin’s days as prime minister are numbered.

The rumour mill started by Lokman Noor Adam has also gone into overdrive after Tun Dr Mahathir Mohamad’s suggestion for a National Operations Council, which many believe is an attempt to see the emergency that is supposed to end in August being prolonged indefinitely.

Current discussions at the Umno headquarters at Menara Dato Onn now include a surprising scenario.

Sources told The Vibes that the party’s MPs are being approached to vouch for Datuk Seri Hishammuddin Hussein as the candidate for the deputy prime minister’s post.

What has set tongues wagging is that representations are being made to Umno members that Muhyiddin will step down as prime minister in the months ahead, allowing Hishammuddin to take over as the country’s ninth prime minister.

While many may be able to stomach Hishammuddin as the nation’s third prime minister in as many years following the 2018 general election that saw Barisan Nasional defeated for the first time, another scenario could be more difficult for Umno members to accept: Datuk Seri Mohamed Azmin Ali as deputy prime minister.

“Umno MPs may not be ready to accept Azmin,” said a source.

Azmin, seen as one of the key architects of the Pakatan Harapan government’s fall last year, is viewed as a divisive factor.

His handling of the economy as international trade and industry minister during the pandemic has been criticised. However, he does bring with him at least 11 MPs.

Hishammuddin’s hat being thrown in the ring does come as a surprise. Despite his seniority, the foreign minister does not hold any top post in Umno.

He is not even in the Supreme Council, although his grandfather, Dato Sir Onn Jaafar, was a founder of the party, and his father, Tun Hussein Onn, was Malaysia’s third prime minister.

It is learnt that party members, as well as several non-Umno leaders, are being told that the Agong has consented to this proposal.

“However, we know this is not accurate, as His Majesty has yet to take a position on this. Moreover, he has not yet finished meeting all political party leaders,” said a high-placed source.

Hishammuddin has yet to respond to queries.