An online petition urging International Trade and Industry Minister Azmin Ali to resign has gained over 100,000 virtual signatures as of press time.

The petition, which was launched yesterday states that Azmin should resign for “failing in his duties”. 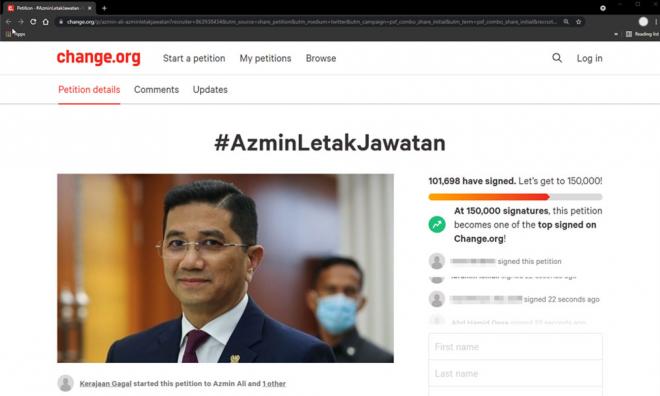 The minister has been under fire for the large number of businesses – particularly those in the manufacturing sector – that were allowed to continue their operations during the total lockdown period.

As of yesterday morning, 128,150 out of 586,308 applicants had been approved by the ministry to operate during the latest lockdown.

Prior approval for alcoholic beverage companies to operate had also reportedly caused friction between Azmin and Defence Minister Ismail Sabri.

Another point of contention was the eleventh-hour change that required businesses from all sectors to seek Miti’s permission through the Covid-19 Intelligent Management System (CIMS 3.0) if they wanted to operate.

Malaysiakini previously reported that some non-essential services got approved but essential sectors such as food and beverage outlets were struggling with the unstable CIMS 3.0 website.

Yesterday, Azmin said he “noted” the complaints adding his ministry was not the sole arbiter of the approvals system and that 15 ministries were involved in the process.