Weeks ago, as India saw its daily Coronavirus cases skyrocket to more than 250,000, the country received 300,000 Rapid Antibody Test Kits from the Chinese city of Guangzhou. Those test kits, which produce results in just 15 minutes and work on blood samples rather than nasal swabs, were quickly airlifted to Rajasthan and Tamil Nadu.

Of course, this is not the first time India bought medical supplies from China. About a year ago (April 2020), the country received 650,000 test kits from China, even as efforts were ramped up to obtain PPE and medical supplies from other countries such as South Korea, Canada and France. Despite an initial product quality hiccup, China has remained as a major source of supply to India.

Yes, as early as April 2020, when the entire planet, including China, was plagued with the outbreak, the Indian government had contracted Chinese companies for nearly 15 million PPE and 1.5 million rapid testing kits. From work-from-home technology gear to health care equipment, the global demand for China-made products, the world’s biggest manufacturing powerhouse, continues skyrocket.

But about two weeks ago (26 April), Beijing suddenly suspended cargo flights by Sichuan Airlines, which was supposed to transport medical supplies to India. The 15 days suspension was reportedly triggered because China wanted to “reduce the number of imported Covid-19 cases”.

The suspension of cargo services was a huge blow to India as it struggles with record-breaking infections.

Interestingly, even though India is known as the pharmacy of the world for its massive production capacities of both generic drugs and vaccines, China accounted for half – worth a staggering US$2.4 billion – of its API needs in 2019 from nearly nothing three decades ago.Today, 60% to 70% of Indian’s requirement of KSMs and APIs come from the Chinese.

Subsequently, China’s state-run Sichuan Airlines, which operates about 11 cargo flights to different destinations in India, revoked its suspension of the cargo flights, but not before India’s Ambassador in China – Vikram Misri – was pressured by the Pharmaceuticals Export Promotion Council of India (Pharmexcil) to use diplomatic channel to appeal for a resumption of the flights.

The suspension, nevertheless, has raised eyebrows as there was no crew change in India because the same crew flies the aircraft back to China. In addition, there is also virtually no Indians travel to China from India other than diplomats as China has suspended visas for Indians since November. But the cargo suspension is just one of many disruptions faced by Delhi.

Siddharth Sinha of Sino Global Logistics, a Shanghai-based freight forwarding company, said the freight charges have been increased to over 20%. There were also complaints of Chinese manufacturers jacking up the prices by 35% to 40%. Some Indian companies who sourced medical supplies from their Chinese counterparts said they have been hit with prices at more than double the usual rate.

India’s envoy in Hong Kong – Priyanka Chauhan – has complained about price instability of China’s products and transport disruptions had affected India’s attempt to deal with the second Covid wave. In an interview with the South China Morning Post, she said – “Our expectation is that the supply chain should remain open and product prices should remain stable.”

She said – “Even if there is a little bit of supply demand pressure, there has to be some stability and predictability to product prices. And there has to be a sense of governmental level support and efforts. I don’t have the information as to how much influence the Chinese government can have in this matter but if they can, then it would be welcome.”

However, Beijing was upset with what appears to be a wild accusation. State-owned Global Times said – “Many Chinese producers have exported oxygen-making items to India at below-market prices by working extra shifts for timely delivery, even during the recent May Day holiday, to ensure the much-needed goods are delivered to those who badly need them.” 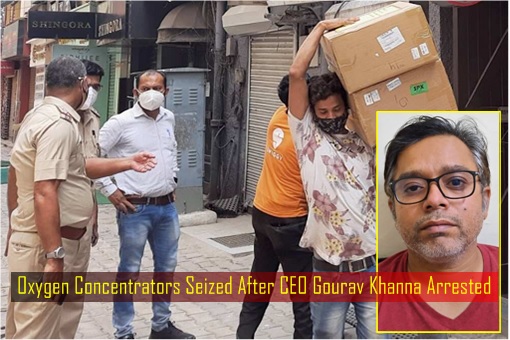 Global Times told India to look at its own backyard, pointing to news reported by the Indian Express on Monday (10 May) of the arrest of CEO Gaurav Khanna and Vice-President Gaurav Suri along with three other employees of Matrix Cellular Services Ltd. The international SIM company was caught in the black marketing of oxygen concentrators.

Based on the excessive profit margin, the Indian company would have made close to US$4 million profits. Global Times also argued that it’s not possible to keep prices at pre-pandemic level since commodity prices of materials like steel and plastic, essential for making the medical equipment, have skyrocketed around the world, and some core spare parts like chips rely on scarce imports from the U.S.

In reality, China can always give priority to other more lucrative markets like the U.S. or the European Union, countries with deep pocket that are willing to pay top dollar and in advance. However, Beijing was willing to divert the resources to produce oxygen devices – even at razor-thin profit – for India as it is in urgent need of those equipments to save lives.

Liu Zongyi, secretary-general of the Research Center for China-South Asia Cooperation, said – “The black market is the norm in India. It is an Indian thing and there is nothing that Chinese companies can do about it. We are actively providing anti-virus materials to India for humanitarian reasons, and we do our best to provide whatever they want, but when the products are delivered, we can’t control at what price or to whom they are sold.”

Although Sichuan Chuanhang Logistics Co. Ltd, the logistics arm of the Sichuan Airlines, justified the recent sudden rise of Covid-19 cases in India as the reason for its initial suspension of cargo flights to the country, the Indian’s anti-Chinese sentiment and policy makes thing more complicated. Coincidentally, the cargo flight suspension came after the Quad Summit on March 12.

Besides China-India border disputes, the Quad Summit hosted by U.S. President Joe Biden saw the active participation of India along with Australia and Japan in an alliance seen to contain the Chinese influence in the Indo-Pacific region. The U.S. Navy hopes the Quad – Quadrilateral Security Dialogue – could pool all the resources to counter the Chinese Navy, which has the world’s largest fleet.

When India’s Prime Minister Narendra Modi said the Quad would be “a force for global good” during the summit, he was probably using it as a bargaining chip to push the U.S., Japan and Australia to invest in its vaccine production capacity. But such a tactic could also backfire if China decides to make life difficult for Modi, whose administration is under fire for the mishandling of the Covid pandemic.

It defies logic when New Delhi asked its envoys to appeal for a resumption of suspended cargo flights and demanded low price for medical equipments from Beijing, but at the same time joined a US-led alliance to counter the Chinese. Indian drug companies may be aggressively looking for ways to reduce dependence on the richer rival for raw materials to produce medicines and drugs.

However, like Donald Trump, who had tried – and failed – to bring China to its knees, it’s not easy for India to reduce, let alone to entirely decouple supply chain from the world’s biggest manufacturing powerhouse. As a start, India has to improve its infrastructure, not to mention internal bureaucracy, before they can even think of competing on the scale and speed of China.