The PN government is going down the hill of unpopularity extremely very fast. This is exactly the same thing that happened to Dr Mahathir’s Pakatan Harapan government which was kicked out after just 22 months in power. And the reasons are the same. Please read Sejarah Berulang at the bottom here.

1. No confidence vote is out of the question.

For now Tan Sri Muhyiddin Yassin (TSMY) is quite intact as the PM. There will be no more votes of no confidence against him.  He has the support of enough desperate MPs and Cabinet Ministers from Umno, Pas and other parties such that he will have a thin but comfortable majority in Parliament to hang on.

As long as the desperados support him the PM will be in office until the 2023 general elections. But since the next GE15 is only (about) 23 months away it is really difficult to see TSMY surviving GE15. Do read on.

2. The overall atmosphere in the country now is hatred of the government.

Dr Mahathir’s Pakatan Harapan government went from hero to zero in just over 12 months of being in power. After another 10 months (and losing SEVEN by-elections) Dr Mahathir was kicked out in February 2020 in a yet-to-be-fully-explained coup de etat.

The General Election must be held in about 24 months. The way things are now the PN is going to get kicked out. This seems to be more certain as the days go by, as more stupid Ministers say and do even more stupid things, as the economic recovery is getting more remote and the Covid crisis is being poorly managed. (Getting worse actually).

The big factor in the PN’s favour is that there will be no more By Elections allowed – since the GE is two years away. Under Dr Mahathir there were multiple By Elections and Dr Mahathir lost seven of them. In Tanjong Piai in Johor the PH was almost completely wiped out. That is why Dr Mahathir was kicked out – the people began to hate his leadership.

Back to the PN – under the PN Malaysia has slipped down the corruption indexes again. Read  the latest “Sarawak Report – Big Money For Small Businesses!” for another expose of yet even more corruption going on in the PN government.

The Covid Vaccine program is a shambles. Now I get messages from MySejahtera to register for the Astra Zeneca vaccine. What about the other vaccines? Anyway by 12 pm I get another message that registrations sudah tutup or words to that effect. What is going on? I am a warga emas now. Still no news from MySejahtera.

And all the stories about the Covid vaccine, the billions and billions being spent. Last year’s Budget allocated billions for Covid. This year billions of KWAN money are being used also for Covid. So many billions. Where are the vaccines?

3. TSMY losing support or has lost support in Pagoh and in Johor.

Talk is that for sometime now TSMY has lost significant support both in his homestate of Johor as well as in his own Parliamentary constituency of Pagoh. People high up in Johor suggest that TSMY may even lose his Parliamentary seat in Pagoh in the next election.

This suggestion is not without basis because (for example) one of TSMY’s closest lieutenants for 20 years (Dato Shaharudin)  dumped him and switched sides to Dr Mahathir and Pejuang. Even Dr Mahathir was surprised and said the last person that he would expect to support him would be Shahar. But that is what happened.

Shaharudin was one time ADUN in the state seat of Jorak which falls under TSMY’s Pagoh Parliamentary seat. Shaharudin has significant influence in the area and has been running down TSMY with some effect.  So the PM does not stand on solid ground both in his home state and in his own constituency of Pagoh.

4. Challenge to TSMY’s position from inside Bersatu.

The rumour is that there will be a challenge to TSMY’s position as president of Bersatu at the party’s elections next year. The person who is rumoured to be the challenger is Genda.  Genda was behind the Sheraton Move, he delivered Sabah to Bersatu and has also been closely involved in the Bersatu chessgames. Although the recent leaked audio tape over the Police matters has splashed a bit of mud over him n’theless Genda is a planner and a doer.

More importantly WHY is there talk about TSMY being challenged from inside his own party? The answer is a duplicate to what happened to Dr Mahathir and the Pakatan Harapan.

The Game of Thrones in Parliament will see TSMY retain his post of Prime Minister. But it is obvious that outside of Parliament, TSMY is weakening. The general public has significant hatred for the PN government and TSMY is also weakening in Johor and Pagoh.  In situations like this usually challengers will rise up to “save the party’.  This is exactly what happened when Dr Mahathir lost seven by-elections and became extremely unpopular. He was kicked out as Prime Minister.  Now the same thing can happen to TSMY.

History repeats itself. Sejarah berulang. Do read on. 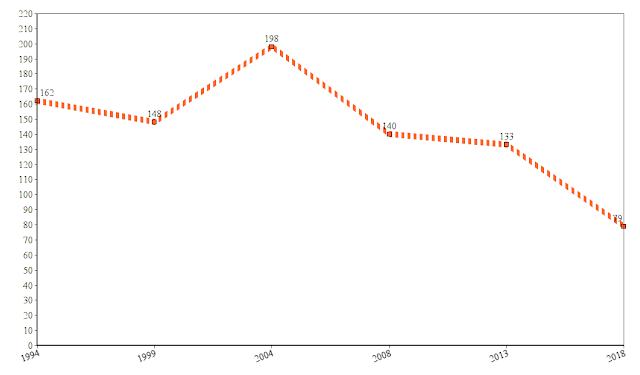 You can clearly see that from 1994 to 2018 the trend is down, down, down.
The huge success for the BN in year 2004 was an anomaly. After getting tired of Dr Mahathir (who quit in 2003), the people gave Abdullah Badawi a huge vote of ‘Great Expectations’ in 2004. Badawi won 198 Parliamentary seats in 2004. But Mr Clean soon started wearing the Dirtiest Laundry and so in 2008 Badawi lost 58 Parliamentary seats to secure only 140 Parliamentary seats. Badawi also lost the 2/3 majority for the first time.
It was at this time (2008) that one analyst gave a talk to a closed audience where he said that the BN will lose more seats in 2013 and finally get kicked out in 2018. And that is exactly what happened.
In 2013 the really stupid Najib lost even more seats for the BN. The BN won only 133 seats in 2013.  Then came disaster in 2018 where the BN under Najib lost the elections completely. The BN won only 79 Parliamentary seats.
The question is the downtrend had begun from 1994. How come these idiots in the BN could not see that they were steadily but certainly losing popularity?
The simple answer is money. Money makes you blind. They were making so much money at the expense of the rakyat that they did not see that the rakyat was getting tired of them. The people were getting poorer.  Especially the Malays.
So they did not change the policies. They did silly things like giving out cash during elections, giving out BR1M, handing out free this and free that. What they did not do is make the people rich by being able to stand on their own feet and compete. So after the cash handouts ran out, the Malays became poor again.
And these policies DID NOT CHANGE even after Pakatan Harapan came into power and Dr Mahathir became the PM for the second time.
Dr Mahathir continued the same failed policies. He wanted to make yet another third national car !!  Senility had certainly set in.
Why couldnt Dr Mahathir abolish the tolls? Or at least reduce tolls by 30% (which had been discussed). Because the toll roads were controlled by his old Umno buddy-buddy cartels. There was and still is a huge eco-system behind the toll road cartels that live off easy money. The suppliers, the contractors, the sub-contractors, the repairs, maintenance, equipment suppliers etc etc are all from the old BN days. They are still in place. If the toll roads had been abolished this entire ecosystem would be jeopardised.
Therefore to save this eco-system Dr Mahathir refused to abolish the tolls or even to reduce them significantly.  The people will continue to pay tolls for the benefit of the few rich. It is this line of dinosaur thinking that lost Dr Mahathir SEVEN by-elections.
And then when the other Pakatan Harapan leaders  saw that Dr Mahathir was losing so many by-elections and the public had begun to hate the Pakatan Harapan (including myself – I had been Dr Mahathir’s supporter for over 20 years) thats when they decided to dump Dr Mahathir. Hence the success of the Sheraton Move and Dr Mahathir was kicked out.
Then came Tan Sri Muhyiddin Yassin. And now TSMY is doing the same thing. No change in the same old policies that saw the BN losing their influence from 1994 and getting finally kicked out in 2018,  and then Dr Mahathir getting kicked out in February 2020.
It is the same old money game – the cronyism, the orang kaya politics, the Melayu elit getting the lion’s share, the ordinary people suffering etc etc.
Nothing has changed. That is why history is repeating itself. Again the people hate the government. So once again some one else will try to overthrow TSMY as the party president. Just like Dr Mahathir was overthrown by TSMY.  Then they will repeat the same old mistakes. The policies will not change. New cronies will replace old cronies. But still cronies.
The people will benefit less. So yet again the people will kick out the government at the next general elections.
We have to break this cycle.  Someone has to come to their senses.