China and India are the two largest countries in terms of population size. China, the world’s most populous nation with 1.44 billion, has just slightly more people than India’s 1.39 billion. But on May 1, when most of the world celebrated International Workers’ Day, also known as Labour Day, both countries were facing different problems.

On Saturday, the first day of the five-day May Day holidays, China was facing traffic problems in Shanghai as tourists packed the city to enjoy their holiday – many without face masks. As the country continues its economic recovery from Coronavirus pandemic, Beijing similarly saw more than 1-million people visited the city’s attractions like the Forbidden City.

On the first day itself, people made more than 58.3 million trips, a 119% jump from last year. Domestic tourists, unable to travel overseas, made 1.9 million trips by air, 18.8 million trips by railways, and 36 million on the road. As part of “revenge” travel, about 265 million journeys by road, train or boat during the 5-day holiday saw record bookings for flight and hotel.

But it’s a different type of congestion problem in India. New Delhi is fast running out of space for cremations as the city’s morgues and crematoriums are overwhelmed by masses of Coronavirus deaths. With more than 300,000 daily cases reported for nearly two weeks now, briefly breached the 400,000 mark on 30 April, oxygen supplies and hospital beds remain in desperately short supply. 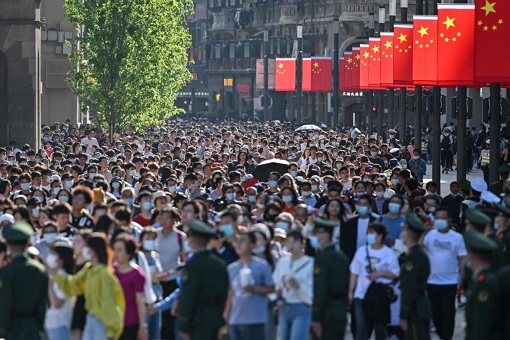 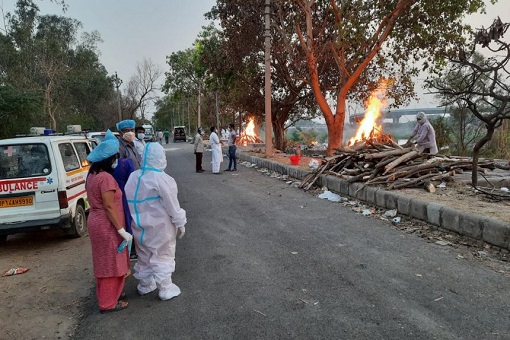 The world was shocked to learn that some crematoriums which ran out of wood had asked people to bring it themselves, not to mention melting metal parts as crematoriums work around the clock at 100% capacity – 24 hours for 7 days a week.

In the southern state of Karnataka, the government has been forced to permit families to cremate or bury their dead loved ones in their own farms, lands or backyards.

Facing mounting criticism over its handling of the pandemic and its decision to allow huge election rallies and massive religious festivals to proceed in recent weeks, India’s central government had resorted to demanding social media like Twitter to remove posts which were critical of it. However, on Friday, the country’s Supreme Court defended the rights of citizens to express grievances.

Slammed for selfish and indifferent towards a friend, U.S. President Joe Biden went into damage control and sent the first consignment of emergency medical supplies to India, which finally arrived on Friday. Unfortunately, the assistance, which the White House said is more than US$100 million worth of support, fails to meet the critical short supply of beds and oxygen.

The supplies, loaded on a U.S. military plane, consisted of 1-million rapid Covid tests and 100,000 N95 masks. The U.K. said it will send another 1,000 ventilators on top of 200 ventilators and 500 oxygen concentrators sent last week. Russia, Europen Union, Australia, Canada, Singapore, China and Pakistan have all pledged to provide relief and support.

Mumbai-based Dr Zarir Udwadia, however, said the aid being offered was “a drop in an ocean”. The country is short of almost everything. Even though India is the world’s biggest producer of vaccines, it does not have enough stock for the estimated 800 million people who needed vaccines. So far, only 9.3% of its population had received at least 1 dose of vaccine.

Mumbai, the country’s financial capital and home to more than 20 million people, has already suspended its vaccination program since three days ago due to “depletion of available vaccines”. The shortage of vaccines, despite the land being the Serum Institute of India, could trigger another crisis as about 40 million people were due for their second dose on May 1 – three days ago.

In truth, what India badly needs is a more comprehensive solution. As the eastern state of Odisha and northern industrial state Haryana became the latest to announce new lockdowns, joining New Delhi, Maharashtra, Karnataka and West Bengal, the country needs to quickly learn from China how to stop, or at least contain, the surge of Covid-19 virus. 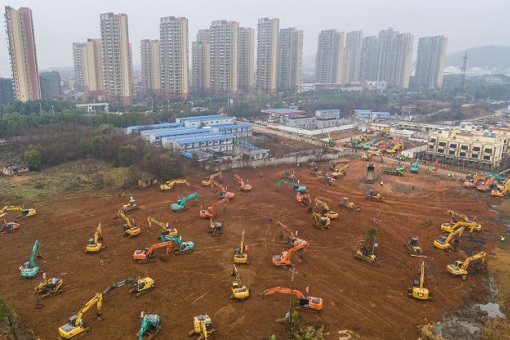 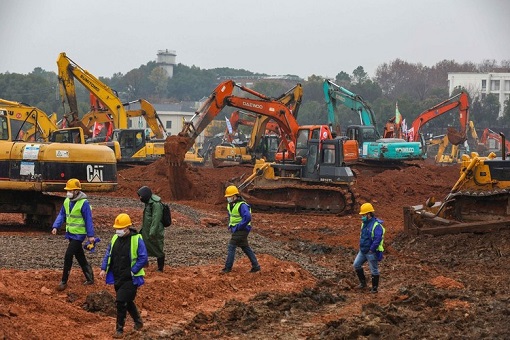 Dr Anthony Fauci, the White House’s chief medical adviser, while acknowledging that wealthier nations like the U.S. have failed to provide response to prevent the “tragic” Coronavirus outbreak in India, has also suggested a lockdown for a few weeks. He said in an interview – “We know that when China had this big explosion a year ago, they completely shut down.”

More importantly, in his exclusive interview with the Indian Express, Fauci said India should seriously consider building hospitals the same way the Chinese did. He said when the issue of hospitalization was raised, he immediately thought of how China literally built hospitals within a few days to take care of people when the outbreak hit Wuhan in early February 2020. 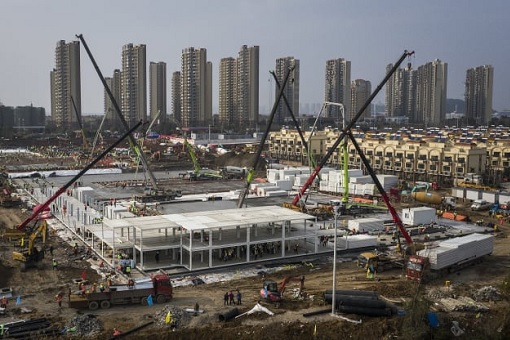 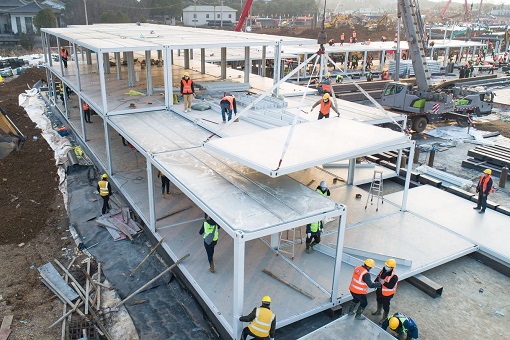 He said – “I think it should at least be seriously considered. The intermediate – to get hospitals built quickly. I mean really quickly, within a matter of – you know, they put up these field hospitals that they built during war. You should think of this, in some respects, like a war. The enemy is the virus. So you know where the enemy is, so I would make it almost like wartime because it’s an emergency.”

China’s success has been attributed to a number of factors. Bruce Aylward, assistant director-general of the WHO (World Health Organization), revealed that China’s success came from speed and from taking contract tracing seriously. He said – “The faster you can find the cases, isolate the cases, and track their close contacts, the more successful you’re going to be.”

When Wuhan was identified as the source of the outbreak, it was quickly isolated, with 11 million residents of the city spending 76 days in lockdown.

In fact, between January and February 2020, the Chinese government had confined 507.5 million people either in full or partial lockdown covering 20 provinces – more than the populations of the U.S. (327.2 million) and Russia (144.5 million) combined.

People around the world were flabbergasted with news about excavators, trucks, bulldozers and hundreds of construction workers mobilized at unbelievable speed to build a hospital with 1,000 beds in just 6 days. In two weeks, two hospitals were up and running – with a capacity of 2,600 beds. Engineers were brought in from across the country in order to complete construction in time.

According to The Lancet medical journal, a whopping 14,000 health and temperature checkpoints were set up at most major transport hubs across China. Yes, the key to China’s success was its speed and commitment to testing. Not only getting a Covid test was fast, but also free. Those who tested positive were immediately sent to isolation centers or nearby hospitals.

After Wuhan, the Chinese government takes new cases very seriously. For example, on October 9 last year, after 12 new cases of Covid-19 were discovered in the eastern city of Qingdao, the authorities declared it would do a mass testing on its entire population of 9 million people in “five days” – about 1,800,000 residents per day. That’s about the entire population of the New York City.

China’s ability to test more than a million residents in a day is legendary and indisputable. In May 2020, when 6 new cases re-appeared in Wuhan, previously the epicentre of Coronavirus, the authorities tested its 11 million residents over a 10-day period. In what appeared to be a minor cluster by Western standard, the Chinese government was determined to hunt down asymptomatic carriers.

The campaign was not only labour-intensive, but also very expensive. But China knew the money would be well spent. Wuhan health authorities revealed that at least 1 billion Yuan (US$220 million) had been allocated by Beijing to ensure all 11 million people were tested.

Even though they found only 300 asymptomatic cases and 1,174 positive cases, it makes people feel safe and increases confidence nationwide.

Like it or not, China is the closest solution India can copy. Prime Minister Narendra Modi should realize that desperate times call for desperate measures. New Delhi might be too proud to ask for help from Beijing, but this is not the time to think about losing face. China is arguably the only country with a similar huge population that has defeated the virus.

Despite different ideology and political system, China’s methodology appears to be the best solution for India. The country does not have the luxury like its Western friends who were too proud to admit that the Chinese methods work like a charm. What is regarded as draconian and unethical lockdown in the U.S. and Europe has proven to be the working solution in China.

Coronavirus does not discriminate whether China is a communist country or India is a democratic nation. The current crisis has shown Delhi is fast losing its battle against the pandemic, while Beijing, having defeated the pandemic, had celebrated the eight days (Oct 1-8, 2020) Golden Week of Mid-Autumn Festival holiday and is now celebrating the five-day May Day holiday.

As pointed out by Dr Anthony Fauci, chief medical advisor to the Biden administration and who has worked with seven U.S. Presidents, now is not the time to engage in political arguments because India is in a very difficult and desperate situation. The immediate need is not vaccines, but rather oxygen, beds, ventilators and medical care, all of which comes under hospitalization.