PUTRAJAYA: Some RM3.5mil in cash was just the “tip of the iceberg” of the vast amount of wealth and assets amassed by the Datuk ringleader of the “project cartel”, say sources.

Besides the millions of ringgit in funds and real estate, investigators have uncovered several luxury cars, a yacht and two helicopters belonging to the 47-year-old man.

In a series of raids conducted since Monday, graft-busters seized the RM3.5mil at the Datuk’s house in Ampang.

This was followed by the seizure of luxury vehicles worth RM15.7mil and real estate including bungalows, shophouses and offices worth RM29mil belonging to the syndicate he led.

Sources revealed that 644 bank accounts belonging to individuals and companies, involving an estimated RM100mil, were also frozen in the course of the investigation. 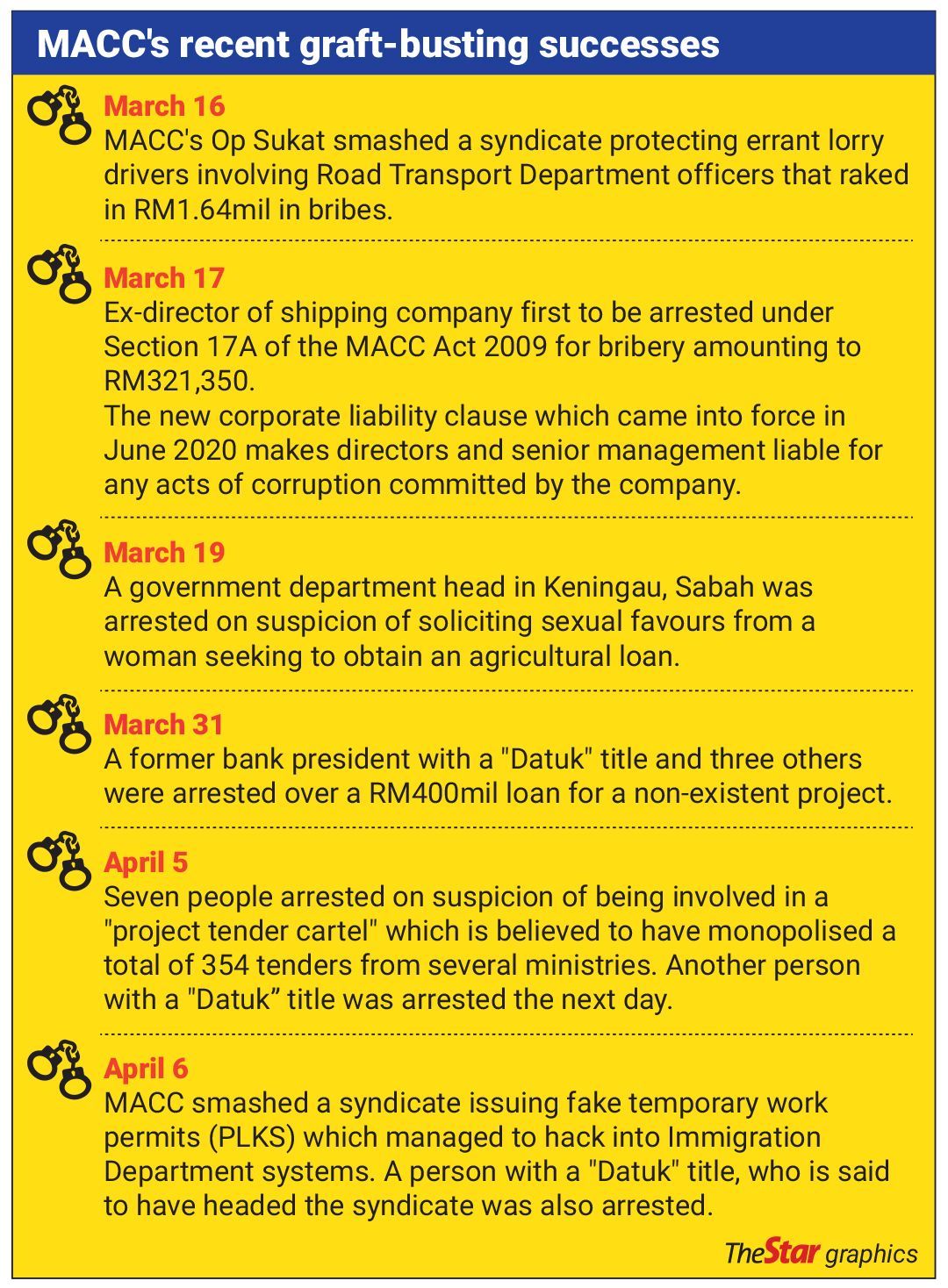 “The cartel led by the Datuk has been grabbing government contracts worth more than RM3.8bil for about seven years since 2014, ” a source said yesterday.

The Malaysian Anti-Corruption Commission (MACC) also discovered that the cartel had set up more than 150 companies.

“Each company would have an individual as the company director with a salary of between RM5,000 and RM8,000.

“Investigators believe the names of 114 individuals have been used to set up the 150 companies, ” said another source.

It was learnt that all the companies took turns to bid for government contracts and tenders at various ministries and agencies.

“Information on the tenders and contracts including the specifications and ceiling prices for the projects were provided by insiders.

“Almost all companies (in the cartel) used false information in terms of academic qualifications, professional certificates as well as financial statements.

“All this to convince the tender board of their capabilities to carry out the projects, ” said the sources.

It was reported earlier that the Datuk was believed to be the ringleader of the cartel and the “force” behind 150 companies that have been grabbing the bulk of government contracts worth billions.

The “project cartel” is believed to have been awarded 345 tenders with an estimated value of RM3.6bil from various ministries and agencies nationwide since 2014.

Sources with knowledge of the case said with help of insiders in the ministries and agencies, the cartel’s companies held an advantage in securing government contracts and tenders.

They added that the MACC had been working on the case for almost a year to determine the scope of the syndicate’s activities before closing in on them in a special operation on Sunday night.

Following surveillance, the main suspect and six others were arrested at two separate locations in Ampang and Cyberjaya where they were caught red-handed as they were filling up tender application forms.

The seven suspects were brought before Magistrate Shah Wira Abdul Halim on Monday and remanded for six days until Saturday.