What Happens To The Malay Dignity? – Malaysia Kowtow To China, Hishammuddin Tells Wang Yi “You Are Our Big Brother”

Big brother – written as “大哥” and pronounced as “Dàgē” or “Taikor” – could mean many things in Chinese. It could mean the elder brother in one’s family or the gang leader. One could also use it to appease an immediate boss or superior. You could also call a stranger who is older as “big brother” when you ask for a favour or help.

And if you twist the big brother “大哥” by adding a character “大” (which means big) to it, it becomes “大哥大”, which means the bulky brick-size cell phone in the early 1980s. Obviously, the big brother commands one of the highest respect – or fear – in the Chinese community that you can make dozens of gangster or comedy films just out of the two Chinese characters.

So, when Malaysian Foreign Minister Hishammuddin Hussein said – “You will always be my big brother” – during a joint press briefing with his counterpart, Chinese Foreign Minister Wang Yi, exactly what was he thinking? His statement has provoked controversy back home because it gave an impression that Malaysia readily offered itself to become a subservient state of China.

Probably shocked and flattered over Hishammuddin’s stunning diplomatic language and style, Wang Yi promptly reciprocated with a humble response – “We are brothers”. Mr Hishammuddin was perhaps the world’s first foreign minister who publicly, willingly and shamelessly recognizes the Chinese communist government as the “big brother” without being pressured to.

When he was condemned by Opposition leader Anwar Ibrahim for using inappropriate terminology or language during his two-day visit to China, Hishammuddin quickly offered his excuses. Following the criticism, the Malaysian foreign minister claimed that he had said “elder brother” to show respect to Wang Yi, and that the words did not refer to Malaysia’s relationship with China. 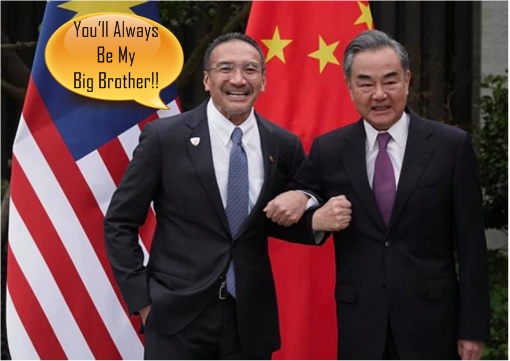 Hishammuddin argued that he had been “respecting that Wang Yi is older, and a more senior foreign minister”. Therefore, said the 59-year-old UMNO warlord, the 67-year-old Wang Yi is “elder brother” to him “personally” and defended that being respectful does not signify weakness. Based on Hishammuddin crooked logic, he should get ready to call many world leaders the “big brothers”.

Hishammuddin, the cousin of former Prime Minister Najib Razak, should stop insulting people’s intelligence. From the video of the joint press conference in Nanping City, Fujian Province, it was crystal clear that when he opened his big mouth to declare China as the big brother, he was talking about Malaysia-China relations – not his personal relationship with Wang Yi.

But even if he was referring to his personal relationship with Wang Yi, which was clearly not, it was wrong. He ought to know that when he spoke during a joint press conference, he stood on the stage on behalf of Malaysia – never in a personal capacity. If he really admires the Chinese foreign minister so much, he could call or worship Wang Yi as his big brother behind closed doors.

Clearly, no matter how Hishammuddin twists and spins his screw-up, he should not have had used the “big brother” to describe either the relationship between Malaysia and China or between himself and Wang Yi. It was already bad to declare China the big brother. It was worse to tell the world that “China will always be Malaysia big brother”.

Not only Hishammuddin said China will always be Malaysia big brother, he took apple-polishing to the next level when he tried to impress host China further with “我们都是一家人” – we are one family. Of course, the astonished Chinese media happily published how the Malaysian foreign minister had spoken in Chinese that Malaysia and China are one family.

However, Beijing should take Kuala Lumpur’s statement with a pinch of salt. Hishammuddin is the type of snake oil salesman who would walk into a seminar room and upon seeing the big boss of a company, would deliberately shout at the top of his lungs “My Big Brother!!” in order to project an impression that he has a special relationship with the top gun that nobody else in the room enjoys.

That’s why the attention-seeker was photographed grinning from ear to ear with his Chinese counterpart Wang Yi. In his haste to outshine other fellow foreign ministers in the Southeast Asia region, the silly Hishammuddin didn’t realized that it would make Malaysia look like a foreign puppet with his “big brother” statement. Heck, even Wang Yi felt rather embarrassed by the clown’s behaviour.

Like his crooked cousin Najib, the narcissist Hishammuddin is crazy about his own importance; hence his dramatic show off in China. Despite having lost power in the 2018 General Election, the former defence minister had abused his power when two Navy special operations force (Paskal) officers and a commando were caught working as escorts for Mr. Hishammuddin.

Of course, hypocrites and corrupt Malay leaders like cousins Hishammuddin and Najib are valuable assets to China. Both leaders would sell their daughters or wives for the right price. To cover up 1MDB scandal, disgraced Najib sold national strategic assets such as power plants, lands like Bandar Malaysia and projects like ECRL to China in exchange for kickbacks.

Both cousins had also committed treason when they deployed military to “Yemeni Civil War” without approval from the Cabinet. The Malaysian armed forces were sent to the Gulf since June 2015 as part of Najib’s commitment to boost Saudi Arabia propaganda machine in the region. The troops were withdrawn following the new Pakatan Harapan government’s decision on 4 Sept, 2018.

Last July, the National Audit Department revealed a stunning report – Chinese ships had encroached into Malaysian waters 89 times between 2016 and 2019. But the liar Foreign Minister Hishammuddin proudly claimed that in the 100 days since he took over the ministry, the Chinese vessels have not dared breach the country’s Exclusive Economic Zone (EEZ) anymore.

Hishammuddin’s cowardice and refusal to defend the country’s sovereignty against China’s intrusion matches perfectly his latest shameful remarks of Malaysia being the little brother. He should stop his pathetic attempts to impress upon Beijing or Wang Yi. If indeed he has a special relationship with Beijing, as he claimed in 2018, he should be able to convince China to repatriate fugitive Jho Low.

The hilarious part was the fact that while Hishammuddin was eager to suck up to mainland Chinese, he was the same ultra racist Malay leader who had brandished his “Keris” (Malay dagger) and threatened Malaysian Chinese not long ago. Interestingly, his cousin Najib had also threatened to soak a Keris in Chinese blood in 1987, evoking fear of 13 May 1969 bloody racial riots. 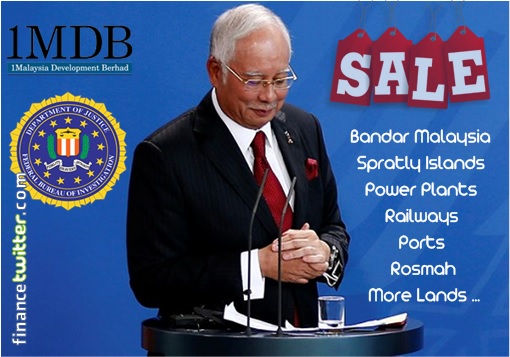 Surprisingly, all of the Malay leaders – UMNO president Zahid Hamidi, PAS president Hadi Awang and PPBM president Muhyiddin Yassin – do not see anything wrong with the foreign ministry’s apparent “kowtow” to the China’s Communist Party. Yet, they are the same “munafiqs” (hypocrites) and bullies who screamed, whined and bitched about DAP Chinese being a communist party.

Malay ultra supremacist used to be foaming at the mouth about bringing back the ashes of communist leader Chin Peng to Malaysia.

Yet, now that one of their own kind foamed at the mouth desperately seeking China’s communist government to become the big brother of Malaysia, all the Malay champions chose to keep quiet in approval. What happens to the Malay dignity?

On the serious notes, the blunder would put Malaysia-China relations under the radar of Washington. Even Australia, known as the United States’ “deputy sheriff” in the Asia-Pacific region, had never called the U.S. or any of its presidents the “big brother”. The U.S. would get very suspicious over Malaysia’s foreign policy under the backdoor Muhyiddin government.

Like it or not, Hishammuddin’s “big brother” remarks are not merely some minor mistakes or miscalculations, but a serious screw-up. It sends the wrong message to the international community that Malaysia is not a neutral nation, but a weak, fragile and illegitimate regime that offers to surrender its sovereignty to China in exchange for protection or other favours.

Coincidentally, PM Muhyiddin, who lost his simple majority in the Parliament, has declared a State of Emergency to cling to power. At best, Hishammuddin could be trying to solicit support from Beijing for the backdoor government. At worst, the incompetent Muhyiddin regime could be looking at selling more national assets to China the same way Najib did.