KUALA LUMPUR: Datuk Seri Nicky Liow Soon Hee is believed to be on the run with several bags of cash.

“We received information that he packed eight bags with cash and fled.

“Although he is believed to still be in the country, we cannot rule out the possibility that he may try to find a way out illegally.

“We do believe that his movements are now limited due to the fact that his two brothers have been arrested, ” he told reporters at Bukit Aman yesterday.

He said Liow was believed to have a close relationship with his two younger brothers, aged 28 and 30.

“Our checks revealed that Liow has 12 prior cases for criminal intimidation, causing hurt and drug-related offences.

“The two younger brothers also have prior cases for drug-related offences as well.

“Our checks revealed the two were a Datuk and Datuk Seri, ” said Comm Ayob Khan, who added investigations revealed that Liow controlled the CCTV network at Setiawalk, Puchong, where the syndicate rented 48 apartments for their scam activities.

“He may also have had a special escape route there to avoid capture.

“Our checks also revealed that Liow had over RM40mil in his personal accounts, based on information from Bank Negara, ” he said, adding that the syndicate these men were involved in had been active since 2014.

Those with information on Liow should contact Asst Supt Prakash Valiappan at 012-5209 767 or the nearest police station. 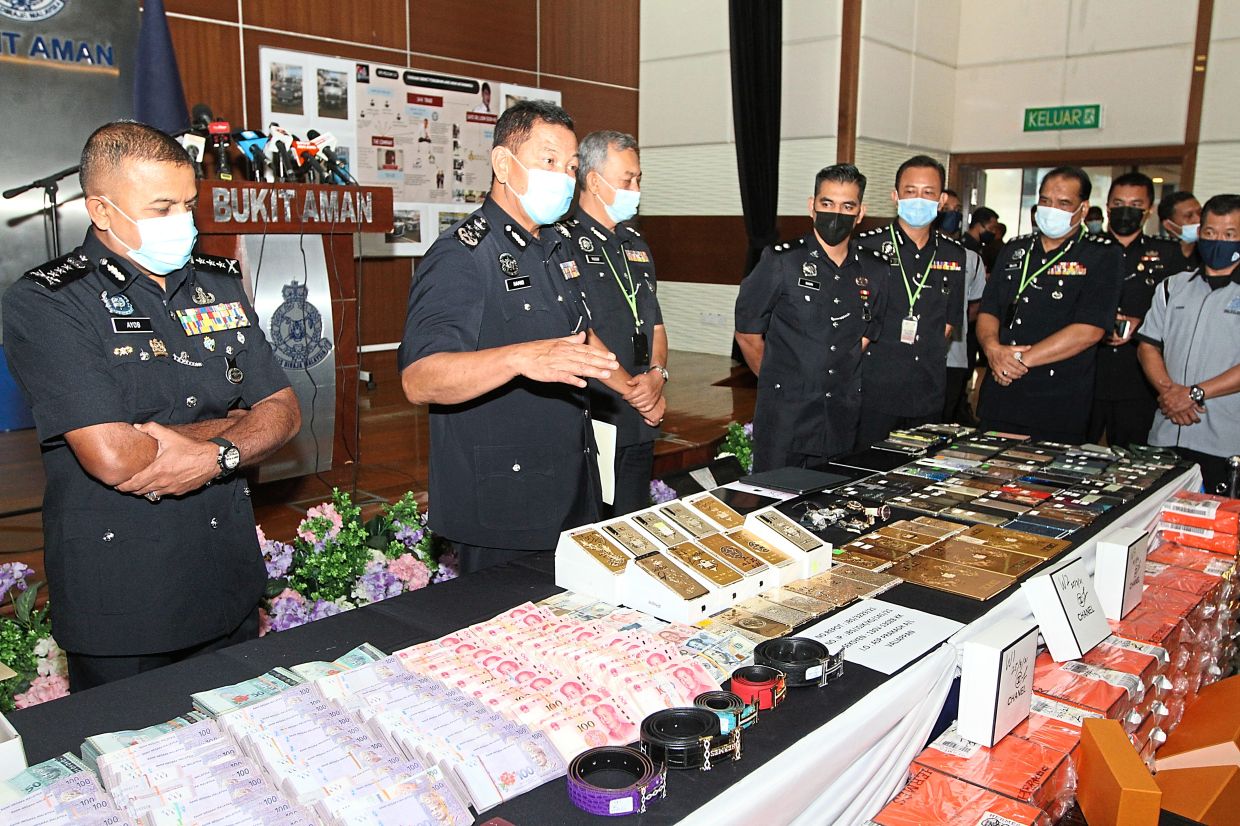 Wan, who was better known as Broken Tooth, had been previously linked to the Inix Technologies shares investment scam.

The 65-year-old Wan was wanted by police here after he allegedly failed to transfer RM6mil in shares in the Malaysia Bursa-listed computer software company to a third party, as had been agreed.

“Broken Tooth who founded the World Hongmen History and Culture Association had appointed Nicky as the vice president in January 2019.

“Both Broken Tooth and the association have been blacklisted by the United States Treasury Department for suspected involvement in international organised crime and money-laundering,” he said.

Checks revealed that Broken Tooth was sentenced to 15 years’ jail in November 1999 for illegal gambling, loan shark activities, criminal association, as well as attempted car-bombing of a police chief.

Wan was said to have led the 14k triad in the 1990s through a vicious turf war for control of VIP rooms at various casinos in Macau, with rival group Shui Fong.

“They promised big returns for property, health products, forex and crypto currency investments such as Wincoin and Winbitex.

“They lure investors via WeChat where the investors would make payments via WeChat Pay,” he said, adding that the money would then be invested in crypto currency as well as for online gambling.

“The task force consisting of 220 policemen conducted 70 operations to trace and arrest the group allegedly led by Liow, 33, who is the founder of the Winner Dynasty Group based at Setiawalk, Puchong.

“We arrested 118 individuals during these raids including Liow’s two younger brothers,” he told reporters at Bukit Aman.

He said they detained 42 men and six women under the Security Offences (Special Measures) Act (Sosma) consisting of 30 Malaysians and 18 China nationals.

In a press conference here yesterday Tan Sri Abdul Hamid Bador said Liow, who has been linked to Macau Scam syndicate operations here, was believed to have at least 34 law enforcement agency personnel under his payroll, including a former deputy public prosecutor to act as a fixer for the syndicate.

According to the Inspector-General of Police, police began massive operations to cripple the syndicate after receiving a police report on the bogus sale of a cellphone worth RM1,500 in Pontian, Johor.

“That is the beauty of doing thorough investigations. The investigations led us straight to the Winner Dynasty Group led by Liow, 33.

“The task force consisting of 220 personnel conducted 70 operations to trace and arrest the group led by Liow, founder of the Group which is based at Setiawalk, Puchong.

“We arrested 118 individuals during these raids, including Liow’s two younger brothers (aged 28 and 30), ” he told reporters at Bukit Aman yesterday.

He said they detained 42 men and six women under the Security Offences (Special Measures) Act consisting of 30 Malaysians and 18 China nationals.

“We also detained 10 Chinese men, one Chinese woman and a Myanmar woman for offences under the Immigration Act while eight Malaysian men were also arrested after they tested positive for drugs.

“We seized RM773,145.78 worth of assorted currencies, and sixteen vehicles including a Rolls Royce and Bentley worth an estimated RM6.67mil, ” he said, adding that Liow was believed to have fled with an unknown amount of cash after being tipped-off about the impending raids, where police also seized a pistol and 40 bullets.

“One of those arrested during the raids was a former deputy public prosecutor.

“We believe this individual was involved due to his network of connections with law enforcement agencies, ” he said, adding that investigations also revealed that Liow had connections to international organised crime elements including the notorious Wan Kouk Koi @ Broken Tooth.

“Broken Tooth was blacklisted by the US Treasury in Dec last year for suspected involvement in international organised crime and money laundering activities.

“Our investigations revealed that Broken Tooth who is the founder of the Hongmen World History and Culture Association had appointed Liow as the vice-president of the association on Jan 4,2019.

“The Hongmen World History and Culture Association has also been blacklisted by the US Treasury, ” said Abdul Hamid, who said the government had frozen 41 bank accounts with RM4.05mil in them, and seized RM8.86mil worth of vehicles from 21 individuals and 16 entities, including the Yayasan Winner Emperor Sedunia and Pertubuhan Integrity Nicky Liow Malaysia under Section 44(1) of the Anti-Money Laundering, Anti-Terrorism Financing and Proceeds of Unlawful Activities Act 2001.