Give us your idea and solutions. How can Malaysia be made better? Stop grumbling about Muhyiddin day in and day out for one year. Tell us what Pakatan Harapan will do if it came back to power considering it was in power for almost two years and it did nothing.

Reading the “clever” criticism of Prime Minister Muhyiddin Yassin by anti-government critic, Martin Jalleh, shows that Pakatan Harapan dan orang-orang yang sewaktu dengannya are really bankrupt of ideas. They are experts at criticising anything and everything the government or the Prime Minister do but they have no clue as to what should be done to improve the situation.

Martin Jalleh is supposed to be one of their more prolific writers and a thinker. But what he wrote (below) does not give that impression. He is merely repeating the standard Pakatan Harapan propaganda about rakyat’s mandate, backdoor Prime Minister, illegal government, ineffective administration, and so on.

Yes, we have been hearing that same thing repeated again and again over the last one year. But what are the solutions? How would Pakatan Harapan do things better and differently if they were the government?

Okay, so they do not want Muhyiddin as the Prime Minister. So, who do they want? 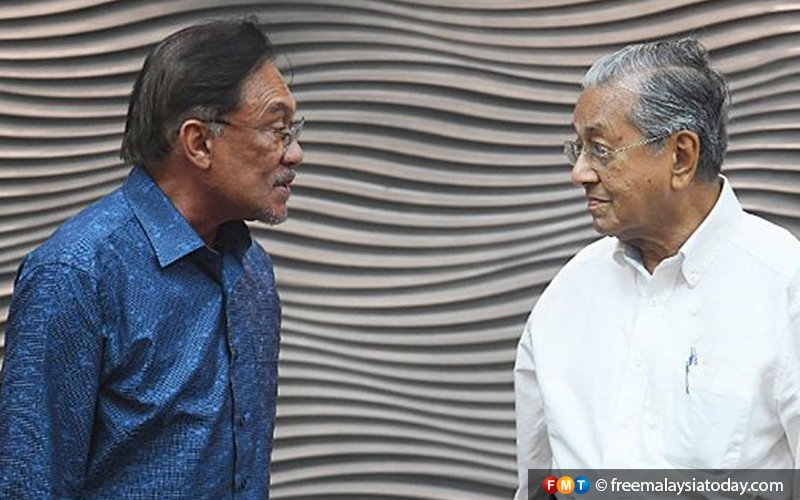 Pakatan Harapan’s solution: replace Muhyiddin with Anwar and with Mahathir as the PM’s “advisor”

How would having Anwar as PM with Mahathir as his “Advisor” improve the situation? Will the dog be waging its tail, or will the tail be waging the dog? Will Anwar be obligated to follow Mahathir’s advise, and if Anwar does not like that advice can he ignore it?

The only way Anwar can be safe would be to become a puppet Prime Minister and follow everything that Mahathir wants. Is this Pakatan Harapan’s solution? And is this a better alternative that having Muhyiddin as Prime Minister?

Martin Jalleh wrote at length about why he does not like Muhyiddin, but he never once explained how the situation in Malaysia can be improved and how the rakyat can have a better life and a more promising future.

The problems Malaysia is facing — from issues related to religion, racism, lack of civil liberties, no independence of the judiciary, abuse of power, cronyism, corruption, etc. — are all inherited from the time of Mahathir, Anwar, Daim Zainuddin and so on. And now they want the problem to become the solution? Gila ke?

Yes, Malaysia may be facing many problems. But these problems were caused by the same people who Pakatan Harapan wants to take over from Muhyiddin and Perikatan Nasional. What logic is this?

How can Malaysia become better if the people who messed up the country take over running the country again? What is wrong with Martin Jalleh and those so-called “thinkers” of Pakatan Harapan? Give us solutions, not try to solve the problem by appointing the problem as the solution.

What is Martin Jalleh’s solution to solve racism and religious conflicts? Ban Chinese and Tamil schools? Ban religious education in schools? Is that Pakatan Harapan’s solution? I think banning religion altogether and allowing everyone to become atheists may be the best solution. Is Pakatan Harapan agreeable to this?

Give us your idea and solutions. How can Malaysia be made better? Stop grumbling about Muhyiddin day in and day out for one year. Tell us what Pakatan Harapan will do if it came back to power considering it was in power for almost two years and it did nothing.

IN PRAISE OF THE PRIME MINISTER

In keeping with the spirit of the Chinese New Year and with the mutual respect that you spoke of in your CNY message, here’s my bouquet of praises to you.

First of all, no Prime Minister but you alone, has been so outstanding in humility. You chose to lead your government through the backdoor instead of the front door.

Next, you are such an astute politician! Your declaration of “Malay First” was a first-class act — you were putting yourself first, in your insatiable desire to be the PM.

Mr Prime Minister, you have even given a personal touch to your premiership by calling yourself “Abah” – yes, you are “Father” to all Malaysians – especially to your illegitimate children in the (illegitimate) government.

You have shown the Malays the true paradox of Malay politics — to achieve “Malay Unity” you have created historic Malay Disunity and to enhance “Malay Dignity” you have made corruption as your government’s SOP!

You even made yourself God’s spokesman when you declared that it was “divine will (which) has caused the three parties (Bersatu, Umno and PAS) to band together for the sake of the Malay-Muslim community’s unity.” God must have tightened the security of heaven’s backdoor after that.

You have even started a new reward system, that of government backbenchers being appointed as heads of GLCs. Obviously, you now share Najib’s sentiments when he sacked you, declaring: “I value loyal people over ‘smart people’.”

Mr Prime Minister you must be very proud of your CREATIVE CABINET — ministers who not only are adept at giving different directives and answers on the same issue on different days, but also differing from those given by other relevant ministers or authorities.

Much to the surprise of many, you have displayed the art of running the country all by yourself, by suspending parliament! Once again you have done this for the sake of the rakyat – who never voted for your government! What a work of art!

It is because of you that we will be a “First” World country. After all, Malaysia is the first and only nation in the world which has suspended her Parliament in an Emergency in the name of Covid-19.

Finally, it is very encouraging to hear that you will be the first person to be vaccinated with the Covid-19 vaccine by Pfizer – the company most famous for developing the erectile-dysfunction drug Viagra.

It will surely make you more political virile after you had lost all confidence, in the face of accusations of political impotence and of a no-confidence vote, aggravated by the increasingly dysfunctional Malay Unity in your coalition.

Never mind the worry in your party that you will you go soft and not be strong like an Ox and have a firm hold of the government and face the hard realities that you are confronted with.