PETALING JAYA: A Covid-19 survivor from Kuching, who was unconscious for 17 days, is grateful for a second chance after recovering from the deadly virus.

Zhang Hui Yun said her family members informed her that she was warded in the hospital for five weeks and was unconscious in the intensive care unit (ICU) for 17 days.

Both Zhang and her younger sister Hui Xian tested positive for Covid-19 in April last year.

“This is my second chance to live. I don’t wish to repeat this experience ever again, ” reported MySinchew, the English-language portal of Sin Chew Daily.

Tragically, her younger sister passed away during her stay at the ICU.

Zhang said she has no idea how she contracted the Covid-19 virus, which has killed more than two million people worldwide.

She has a medical history of gastroesophageal reflux and thought that she was just having a relapse until she collapsed and was immediately rushed to hospital.

“I do not know what happened in the hospital as I cannot remember anything, ” she said.

Sharing her harrowing experience, she said she had to rely on a ventilator and feeding tube without any family members by her side, and only with medical staff support.

She was later transferred to a normal ward after her condition improved but unfortunately she could no longer feed herself and drinking was also difficult for her.

Zhang said that Covid-19 has left her with many negative side effects including severe hair loss.

She said she used to have long straight hair but now loses hair whenever she takes a shower.

And she is slowly learning how to walk again.

She said that she gets exhausted just taking small steps up the stairs.

She also said that during her recovery period in the hospital, she would not let go the hands of the medical staff, asking them not to leave her as she did not have her family by her side. ANN

Chong: Getting Covid-19 was ‘hell’ 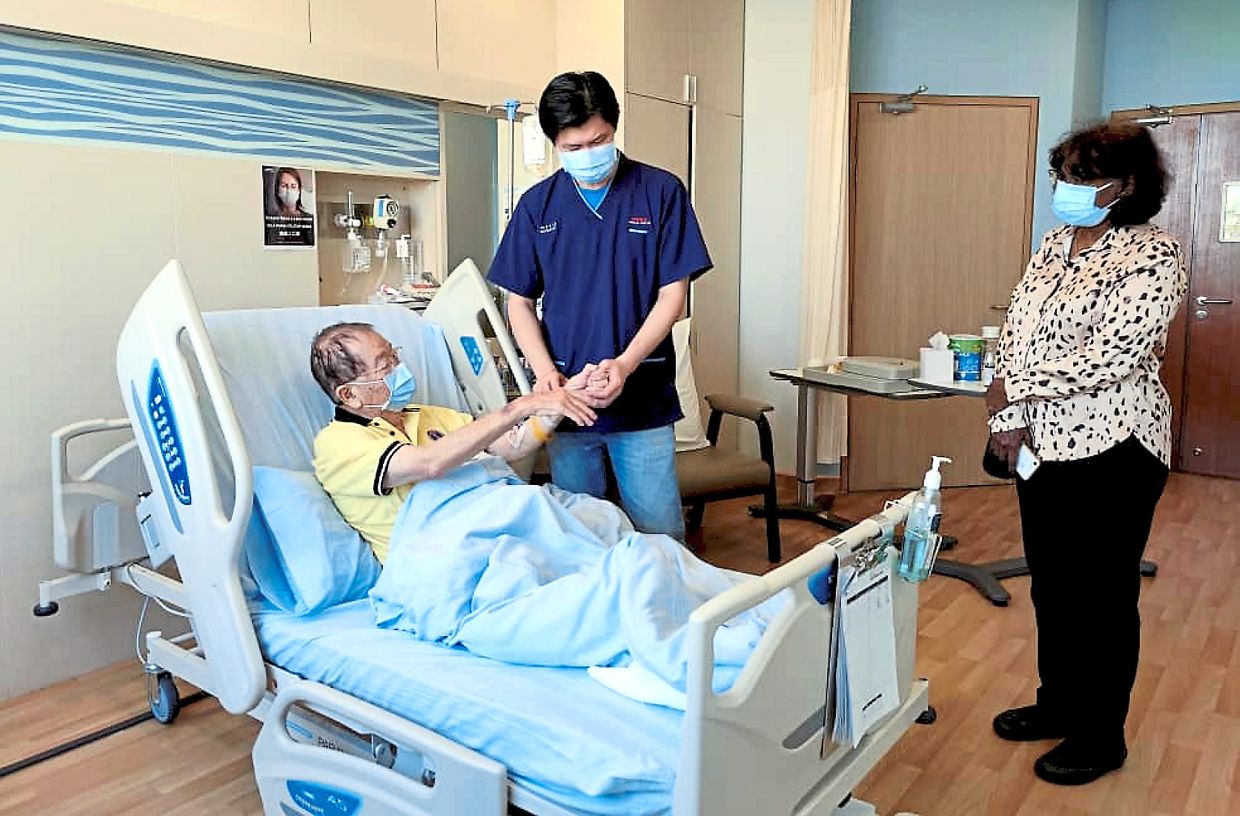 PETALING JAYA: If there is one word that MCA Public Services and Complaints Department chief Datuk Seri Michael Chong could use to describe his experience as a Covid-19 patient, it would be “hell”.

The 72-year-old Chong had to be admitted to the intensive care unit (ICU) on Jan 8 and remained there for 12 days, fighting the Covid-19 virus that had attacked his lungs.

A few days earlier on Dec 26, Chong and some friends attended the opening of a friend’s restaurant here.

“We all followed the standard operating procedure, everyone went back happily.

“Then on Dec 29, I received a few calls from my friends who had attended the opening and they asked if I was experiencing any symptoms. I said no, I was just tired, nothing else.“On Dec 30, I got more calls and that’s when we all decided we should get tested for Covid-19, ” said Chong when contacted.

About 20 of his friends went to get tested and out of that, 18 were confirmed to be positive.

Chong was advised to seek medical treatment and on Jan 1, he was transported to Hospital Sungai Buloh for admission.

He said he was under observation for a week as he had mild symptoms.

“Suddenly, on the eighth day, my oxygen levels fell, my lungs couldn’t take it.

“That was when I realised I was really going to have it because Covid-19 had attacked me.

“I overheard doctors saying that I had to go into ICU or my chances would be zero due to my age and diabetic condition. My body system was weak, ” he said.

Chong was told that his chances of survival were “50-50”, and his family members were informed of his condition.

“I realised it was going to be hell for me, ” he said.

He said the stay in the ICU was not easy and the only thing he could do was sleep.

He could not tell if it was day or night as he was groggy most of the time, accompanied by the sounds of medical equipment and coughs from fellow patients in the ICU.

“Everything is darkness, you are not aware of what is happening. When you ask for water, there is just a small tube to wet your lips.

“Sometimes when I opened my eyes, I could see patients in body bags being wheeled out.

“I knew something was very wrong with me, ” he said.

On Jan 20, Chong was transferred to a normal ward before finally being discharged on Jan 28.

Doctors had advised him to go for rehabilitation therapy for his lungs to recover from the damage.

Chong went to a private rehabilitation centre but after a series of tests, doctors realised he needed further treatment for his lung condition.

“On Jan 31, Sunway Medical Centre took me in and I got discharged today (yesterday), ” he said.

One of the biggest lessons he learnt from his ordeal was to put his health and safety first and not feel obligated to attend any events.

Chong hopes that the vaccination programme will begin as soon as possible in the country. – ANN

Malaysian oncologist in US shares experience of getting Covid-19 vaccine

KUALA LUMPUR — Public doubt over the safety of rapidly-developed Covid-19 vaccines have forced governments around the world to develop campaigns to assure their populace that these were not harmful or dangerous.

While the deployment of such vaccines is still limited, one early recipient — a Malaysian doctor based in the US — offered to share his experience of being vaccinated to help assuage such concerns.

Speaking to Malay Mail, urologic oncologist Dr Tan Wei Phin said he felt called to do so after seeing many of his own relatives and family members being sceptical about Covid-19 vaccines in general.

“They were unsure if the vaccine would work since it was developed in a short period of time. Some might find this surprising, as almost everyone in my family are physicians,” he said during an online interview from his home in Philadelphia, the United States.

Dr Tan said he had taken the time to weigh the risks and benefits of getting vaccinated against Covid-19, and eventually decided the likely harm of Covid-19 was much worse than any potential side-effects caused by a vaccine.

A Kuala Lumpur native, the 33-year old cancer surgeon has resided in the US since 2010, pursuing his studies in Philadelphia, before moving on for his medical residency in Chicago, then undertaking his fellowship at Duke University in North Carolina, before finally returning to Philadelphia again where he now works for MD Anderson at Cooper.

“As physicians, it is our role to promote the responsibility of getting vaccinated. As such we have to be advocates for vaccination if we ever hope to overcome Covid-19.

“Generally I make sure to take the time to speak to each of my patients after sessions with them on the vaccine. Most I find to be very understanding and develop a much more hopeful outlook once I explain things to them,” he said.

However, he said there remained a small but very vocal movement of anti-vaccination advocates in the US, whose voices tend to drown out others, which also made them seem more numerous than they are in reality.

He conceded that some in the group include healthcare professionals, which he said gave inordinate weight to their claims.

To offset this group, Dr Tan said he opted to be vaccinated for the first time with the vaccine developed by Pfizer and BioNTech on December 29 last year, which caused some soreness at the injection site that went away after a day.

His second dose on January 19, however, resulted in more side effects that began manifesting within 12 hours of the injection.

“These included fevers, chills, and a softness in my left forearm, which lasted until 36 hours after the dosage was administered,” he said.

Rather than concern, Dr Tan said the side effects should be viewed as a positive sign that the vaccine was generating the necessary immune response in his body.

He added most of his colleagues also underwent similar experiences, while others also experienced nausea and palpitations.

“Recently an article published in the New England Journal of Medicine indicated that younger people who are vaccinated tend to experience more side-effects compared to older individuals, with most of the side-effects occurring after the second dose.

“The most commonly reported side-effects include fatigue, followed by headache, chills, and muscle pain. It would be concerning if no side-effects were visible after being inoculated, as you cannot be sure if the immune system is working or otherwise,” he said.

Though a US resident for over a decade, Dr Tan still considers himself a Malaysian and was compelled to help engender confidence in Covid-19 vaccines here.

He stressed that while some side effects were possible, these were far milder than what a person would suffer if they were to develop a symptomatic Covid-19 infection.

“The virus is not a disease which you can recover easily from since we still do not know what its long-term consequences are.

“Already there is indication of possible long-term scarring or damage to the lungs after recovering from Covid-19. It still remains to be seen if the human lung capacity is diminished as a result,” he said.

Vaccination against Covid-19 in Malaysia is strictly voluntary, with the government to open registrations via the MySejahtera app once the vaccines are approved for local use.

Dr Tan advised those with the opportunity to take the vaccine to do so as soon as possible, particularly those such as the Pfizer-BioNTech vaccine that has a 95 per cent efficacy rate seven days after the second dose is administered.

“My advice is that you should apply for leave on the day after you are vaccinated, or have it taken during the weekend. This will give yourself time to recover from the side-effects.

“It is my firm belief that it is our responsibility as members of society to help eradicate Covid-19. The best evidence available suggests that herd immunity will only develop if 70 per cent of the population is inoculated, which will also protect those unable to take vaccinations for whatever reasons from the virus,” Dr Tan said.- MALAY MAIL