WITH Covid-19 numbers rising steadily in many parts of the country following the year-end holiday season, is another movement control order (MCO) necessary?

Seems like there may be little choice in not having one, given the reckless manner in which many Malaysians have been throwing all caution to the wind over the past weeks.

While the reopening of state borders was meant among others, to boost the economy and specifically the tourism sector, many are left wondering if it was a prudent move.

On holiday island resorts like Langkawi and Penang, the arrival of visitors have proven to be both a boon and a bane.

The same has also applied in other states which have seen “invasions” of cars and people and this brought joy to local businesses. 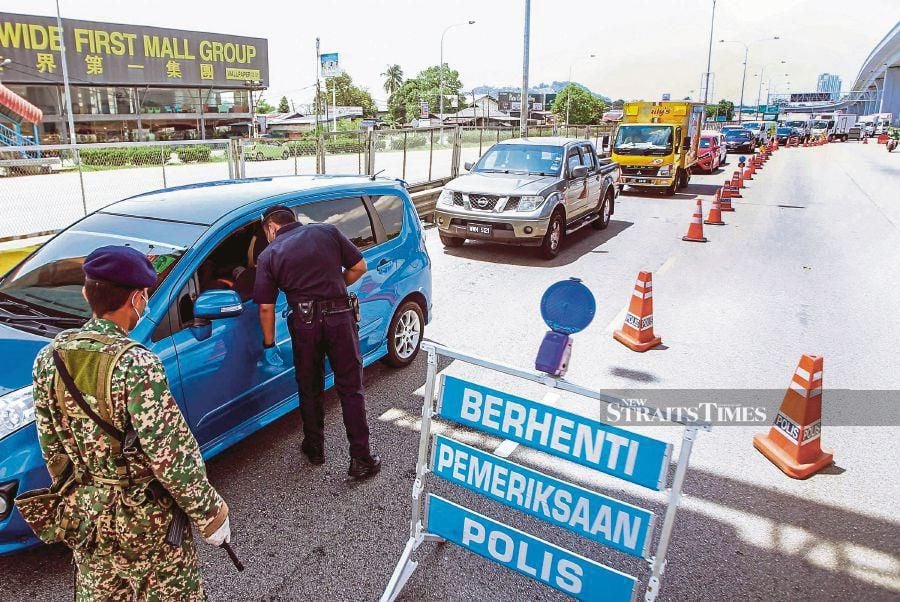 Tourism operators welcomed these arrivals with open arms, while many locals had alarm bells go off in their heads as they either remained indoors for fear of exposing the young and elderly, or fled to other towns to escape the crowds.

Also contributing to more cases, were factory workers and their employers who may have not exercised adequate care in stemming the spread.

Industrialised areas on the island were also no better, as the the “roll-call” of companies affected have become a cause of great concern.

The numbers appear to be still rising as we speak, as more and more people are getting spooked again.

How did we get (back) to this situation?

The fact that many Malaysians were just waiting to flee their homes for a holiday after being confined for many months, may have played a contributing factor.

Festive street and year-end parties, the absence of social distancing at entertainment and food and beverage outlets and crowds at certain tourism spots were not encouraging, as social media was awash with images of everyone having a good time and not prioritising safety and hygiene measures.

Some factory operators are also to be blamed for not taking the necessary preventive steps.

Are we a society that requires constant policing and need to be reminded like children ever so often of the basics that need to be adopted and embraced as part of the new normal?

Our frontline workers have been worked to the bone and are on the verge of near-collapse. Our medical resources have reached maximum capacity.

Until and unless the vaccines promised to us can do their magic in a short time, we are in no position to let down our guard.

The term “the gift that keeps giving” is often used when describing something with continuing circumstances.

Can this term be now applied to the fresh wave of Covid-19 which surfaced over the Christmas holidays and is now gaining momentum?

Regardless, as it has been a most unwanted and unwelcome “present” we could all do without.

Perhaps a targeted MCO is exactly what the good doctors need to order now, so that Malaysians will be forced to stay put at home and limit their movements, support businesses in their own backyards (and the gig economy) and show care for everyone by going back to basics and limiting their own and everyone else’s Covid-19 risks. – NST

Lockdown should now be last resort, not first response

MALAYSIA’s Covid-19 daily positive cases of 3,027 today is an all-time high. The situation is worrying and the government seems to be clueless of what to do next to contain the spread of the virus.

There seems to be a breakdown in communication within the government. On one side, some pushed for another round of lockdown or more stringent movement-controls to contain the spread.

On the other side are those who think that there must be no further lockdowns as we cannot deal with the economic fallout.

Health Director-General Dr Noor Hisham Abdullah proposed to have another round of lockdown, albeit a more targeted and milder version. I think he is pitching this to the public in the hope of imposing a fait accompli on the political leadership. It seems like a lockdown is the administration’s only weapon to fight the Covid-19 pandemic.

I urge the government as a whole to make up its mind which way to go and stick with it.

Unfortunately, eleven months after the first lockdown on March 18, 2020, a lockdown should now be the last resort, no longer the first response. The nation must be mentally prepared to live with Covid-19 for at least another nine months until vaccination reaches a huge number of our population.

The government must convince the public that it has done everything possible before a lockdown is warranted. Clearly, there are so many measures that could have been taken by the government before another lockdown is imposed.

I would list five immediate action items for the government to execute before ever considering a new lockdown:

We have not ramped up testing to a level that would be available to almost everyone whenever they need one. The Health Ministry is still adhering to the idea that only people with symptoms are tested.

But we now know that at least 20% of positive cases are asymptomatic, but can be equally contagious. Therefore, the idea that only persons with symptoms are tested is out of date and doesn’t help to (improve) the situation.

The private health sector should be involved in a much bigger way to help the testing effort at a much cheaper rate. Testing is not rocket science, so it can be replicated with some effort.

We should ramp up testing with the Antigen rapid testing kits (RTK-Ag) that are quite inexpensive compared to the PCR, to help to slow the transmission of Covid-19.

DAP’s Bukit Gasing assemblyman Rajiv Rishyakaran proved that such intervention is possible when he announced the initiative to make testing kits available to the public at a discounted rate of RM70 without government subsidy. The same test kit costs between RM150 and RM180 at private healthcare facilities.

Early diagnosis would help us gauge the situation more accurately and is certainly a cheaper way compared to city-wide or state-wide lockdowns.

I urge the Health Ministry to stop the practice of giving weird names to clusters that have very little meaning to ordinary citizens and conceals the accuracy of the data.

What we want to know each day is how many prisoners are infected, which factory’s dormitories are now hotbeds of infection, which shopping malls see spikes of infection.

With transparency of data, the entire government and the public can decide on what the most effective course of action would be, both for systemic good and personal safety.

More than 10% of Covid-19 positive cases come from prisons and detention places, and more than 10% of prison guards and prisoners have been infected. Prisoners are sitting ducks in overcrowded prisons. The authorities have a responsibility to the prison guards, prisoners and the nation to prevent prisons from becoming a hotbed of infection.

On October 5, the Prison Department identified 11,000 prisoners whose jail term is less than a year with remaining sentence of less than 3 months for “licensed early release” to reduce prison overcrowding. Thus far, on average, only 500 prisoners were released each month under this scheme since October, which doesn’t help the situation much.

There should be a “whole-of-government” effort to include the Welfare Department, the Police, National Anti-Drugs Agency and other authorities to ensure the released prisoners are placed on careful paths so as not to repeat the offences.

There is an urgent need to strengthen the Prison Health Service too. Currently, very few medical resources are assigned to attend to health needs in prisons. Given that prisons are of very high risk during a pandemic, more medical resources should be allocated to ensure there are no further outbreaks of infection from prisons.

There needs to be new thinking about foreign workers and their housing conditions. There must be ways to ensure the recently mandated massive testing effort is fully executed, while serious effort is made to ensure physical distancing at dormitories.

Immediately, there should be ways to assure refugees and illegal migrant workers that testing for Covid-19 will not land them in lockups and detention. Otherwise, they would all be hiding and spread Covid-19 virus to much wider areas.

Fifth, should every positive case be admitted in hospital?

The Health D-G has indicated that the number of hospital beds are now at breaking point due to the spike in cases. A very serious question has to be asked collectively: do we need to keep asymptotic cases all at facilities or are there other alternatives?

In the battle against Covid-19, the most important medical resources are ventilators and ICU beds. They help to prevent deaths. That much we all agree on. But, beyond that, in order to not stretch medical resources, we need a viable alternative for asymptomatic positive patients.

This includes having clear SOP and guidelines for those required to quarantine at home, and employing technology, including digital apps and telemedicine tools to trace, support and monitor the progress of patients. There should be robust debate and discussion on this by health experts across the field.

To conclude, the government must by now come up with a nine-month plan to deal with all aspects of the Covid-19 crisis, which should also include a thorough plan for vaccination. More consultations should be held with all stakeholders and a wider range of experts through parliament and bipartisan parliamentary committees.

*Liew Chin Tong is a senator and the former deputy defence minister.