After almost 10 years and 3 administrations, the controversial HSR (high speed rail) project linking Kuala Lumpur (KL), the capital of Malaysia, and Singapore is officially cancelled. Both countries had on January 1, 2021 announced that the KL-Singapore HSR project was terminated after Malaysian Prime Minister Muhyiddin Yassin chose to let the agreement lapse on Dec 31, 2020.

When then-Malaysian Prime Minister Najib Razak announced the mega project together with his counterpart Singapore Prime Minister Lee Hsien Loong in Feb 2013, it was trumpeted as a game changer. The grand plan, or at least the sales pitch, was to cut travel from 4 hours (by car) to 90 minutes (by train). The 350-km link would have cost an estimated RM60 billion to RM80 billion.

The actual cost, however, is not known even until today. Before the ambitious project could complete in 2031, Mr Najib unexpectedly lost power in the May 2018 General Election. Even his buddy PM Lee was stunned by the defeat, the first in the country’s history since Najib’s coalition – Barisan Nasional – ruled Malaysia for more than 60 years since independence in 1957.

But was the project absolutely necessary? Not to Singapore, but was an absolutely vital project to feed the corrupt Najib regime through kickbacks and cronyism. This is not the Channel Tunnel or Eurotunnel, a 50.45-kilometre railway tunnel between the island of Great Britain and the European mainland, as crooked Najib would like people to believe.

When the Pakatan Harapan coalition won and took over the government in May 2018, then-Prime Minister Mahathir Mohamad said the HSR project would be scrapped due to its high cost and the country’s financial constraint. Under the corrupt and the spendthrift Najib regime, the national debt ballooned to RM1 trillion. Mahathir administration revealed the project would actually cost RM110 billion.

Even after his defeat, Najib continued to defend his pet project, arguing that the high speed rail could have created 110,000 jobs. The infrastructure project, claimed the former premier, could also contribute a whopping RM650 billion in gross national income (GNI) by 2069. Interestingly, Singapore PM Lee was equally passionate about the project. 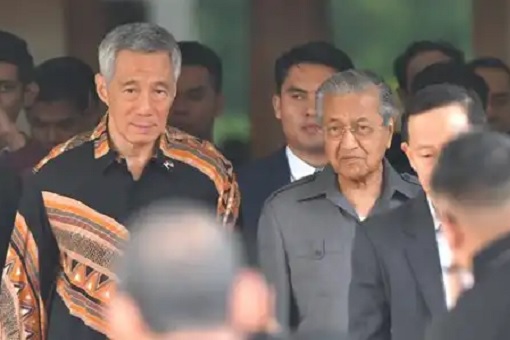 Mr Lee deliberately flew to meet Mr Mahathir after the 93-year-old man led the opposition Pakatan Harapan coalition in defeating Najib. PM Lee Hsien Loong wanted to talk about HSR with Mahathir, but the Malaysian leader simply told him that HSR will be scrapped. The Singapore premier, after giving a short 30 minutes for the meeting, left with tail between legs.

It’s not hard to understand why Mr Lee was trying so hard to defend Mr Najib. Both leaders had been scratching each other’s back for years. Singapore does not need the HSR project from the beginning. After all, more than 90% of the railroad will be on Malaysian soil. Yet, amazingly, the agreement was so lopsided that Singapore would be compensated RM500 million if the project is cancelled.

In comparison, the 688-km East Coast Rail Link (ECRL) project would cost RM55 billion, but the shorter 350-km HSR project costs RM110 billion. Obviously, something was fishy when it costs almost double for a shorter railway project. Shouldn’t China be awarded the HSR project instead, since the Chinese could build it at half the price, or 50% discount?

As it turned out, the Singaporean government had been secretly helping Najib Razak during the peak of the 1MDB scandal. It was believed that the Lee government was closing one eye in helping Najib and his partner-in-crime Jho Low. In July 2019, Singapore finally returned to Malaysia at least RM152 million seized in connection with the 1MDB massive financial scandal. 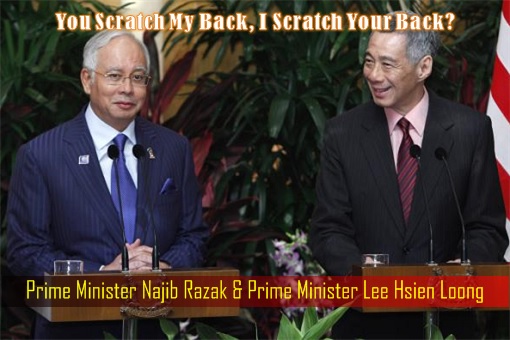 For years since the 1MDB was first exposed, Singapore had kept silence over Najib’s 1MDB scandal – until his defeat. As the world’s 3rd top financial centre (behind London and New York), it was an insult to the peoples’ intelligence that Singapore didn’t know the documents supplied by 1MDB relating to its Brazen Sky Limited account were false bank statements.

So, even if Malaysia had to pay the unjustifiable RM500 million compensation to Singapore, it was still more worthwhile than to continue with the highly marked up RM110 billion HSR project. Unfortunately, the Pakatan Harapan did not last long. After just 22 months, a power-hungry Muhyiddin betrayed his own government and worked with the same crooks he initially fought.

On March 1, 2020, traitor Muhyiddin became the prime minister after sealing a deal with Najib’s coalition Barisan Nasional and radical PAS Islamist party to form the backdoor Perikatan Nasional government. Just when Najib thought his pet project would be revived after being suspended by mentor-turn-nemesis Mahathir, Muhyiddin administration cancelled it.
The backdoor government of Muhyiddin appears to have done the right thing by cancelling the project, despite having to pay RM320 million in compensation to Singapore. However, there’s one problem with the whole drama. On Dec 13, Muhyiddin regime reportedly wanted to restart the delayed project, but without Singapore’s involvement – with the rail ending in Johor and not Jurong East. 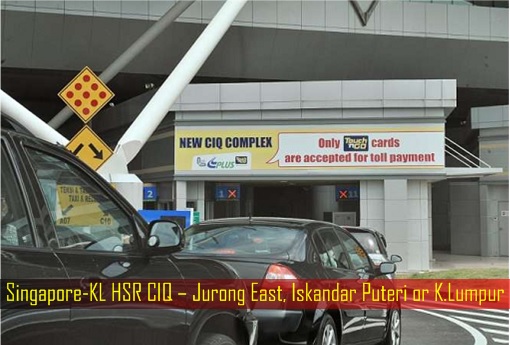 But even without Singapore, Muhyiddin regime says the project would cost around RM65 million – excluding trains. Some analysts had previously estimated the cost to be between RM30 billion and RM40 billion only. Hence, the cost is in the lower range of RM30 billion to as high as RM110 billion – suggesting the project was never properly studied at best, or extraordinarily inflated for kickbacks at worst.

With Singapore out of the picture, it does not make sense to build the high speed rail at all. Malaysia’s population of 32 million is not economically feasible. On top of that, by next year (Oct 2022), the Gemas-Johor Baru double tracking and electrification project is expected to be completed. The project, which involved the construction of 192-km of electrified double track and 11 stations, costs about RM9.55 billion.

In essence, the Gemas-Johor Baru route – the final piece of the existing Keretapi Tanah Melayu Berhad (KTMB) network – will provide a continuous connection running from the southern tip of the Peninsula (Johor) all the way to Padang Besar (Perlis) on the Thai border in the north. Exactly why do we need another redundant railway line that only runs halfway from Johor to Kuala Lumpur?

Without Singapore, the number of expected passengers has been revised from 8.4 million people to 4.2 million. Even if the numbers are correct, the ticket prices for the 4.2 million Malaysian passengers would not come cheap. While a Singapore business traveller has no problem paying up to S$400 round trip, the same cannot be said about a Malaysian having to pay RM1,200. 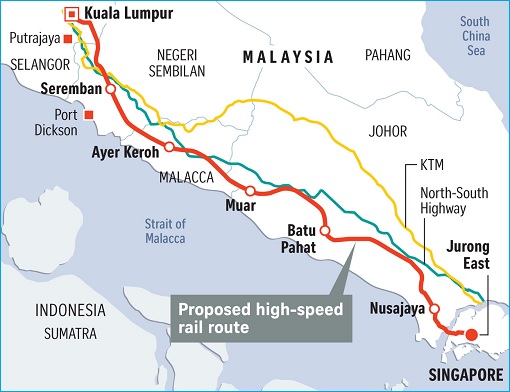 There were reports that under Muhyiddin government, some changes were mooted, included connecting the HSR to KLIA (Kuala Lumpur International Airport), a proposition rejected by Singapore. Curiously, Malaysia Minister Mustapa Mohamed said on Jan 1, 2021, that the Covid-19 pandemic had severely impacted the Malaysian economy, hence the HSR project was no longer viable.

Hilariously, at the same time, Mr Mustapa said – “Moving forward, the government will undertake a detailed study to explore all possible options, including the viability of a domestic HSR project and its benefits to Malaysians”. Why should the country, despite facing economic and financial problems as claimed, still wanted to splash RM65 billion to build the rail project domestically?

The simple fact that Muhyiddin is still eager to proceed with the project, even after the agreement with Singapore had lapsed, raises red flags. You need a thief to catch a thief, and the answer can be found from Najib himself. Upset over the cancellation, Najib claimed he has an idea how PM Muhyiddin plans to milk the HSR as a cash cow through cronyism.

The evil plan was to award a private company – a crony of Muhyiddin – as the new player of KL-Johor high speed rail without any tender, replacing the KL-Singapore original crony. And since there’s no way this crony company can be profitable without Singapore passengers, the government will be forced to compensate this private company using taxpayers’ money.

The business model is like how Barisan Nasional cronies were given highway concessionaires to collect tolls for decades. Not only the concessionaires are guaranteed profits and riches, they would be compensated for toll reduction by way of extension of concession period – forever. It was like highway robbery, and Muhyiddin now plans to do the same to HSR.

Of course, Najib knew exactly how Muhyiddin’s dirty and corrupt game works because it was a copy of Najib’s same plan to benefit from the HSR project – before he was defeated in 2018. Both Najib and Muhyiddin wanted the high speed rail to continue because the potential kickbacks are irresistible – billions of dollars. The only difference is who calls the shot.

Najib’s cronies had already made the killing when they purchased strategic lands and other assets before the high profile project was made public 10 years ago. Still, the juiciest meat is still in the ultimate construction, maintenance and operations of the rail assets. That is why Najib is foaming at the mouth accusing Muhyiddin of having awarded the project to his cronies.

The decision to terminate the HSR project means Muhyiddin’s crony can re-negotiate or re-start the entire project to milk maximum benefits. The prime minister just needed to cook up some silly changes to frustrate Singapore to quit. Regardless whether the project cost is RM60 billion, RM80 billion or RM110 billion, the fact remains that the country does not need a new white elephant.