Why don’t poor countries just print more money? Likewise, why can’t the central bank print money and give the free cash to the people who have become jobless or under-employed due to Covid-19 pandemic? Those are excellent questions – if came from a curious kid. But coming from a deputy minister, it could only mean one thing – something is terribly wrong with the government.

With the exception of the United States, no country can freely print as much money as they like without facing the consequences of economic backlash. Not only the backdoor government of Muhyiddin Yassin constantly shows its incompetency, it has now proven without doubt that its bloated 72 ministers and deputy ministers are an absolute waste of taxpayers’ money.

On Monday (Nov 16), Deputy Youth and Sports Minister Wan Ahmad Fayhsal shocked the entire nation when he suggested that the Bank Negara Malaysia (Central Bank of Malaysia) print money or “helicopter money” – and even write off debt – to help people solve their debt problems in the current economic situation. He floated the idea when asked during a talk with the radio station BFM 89.9. 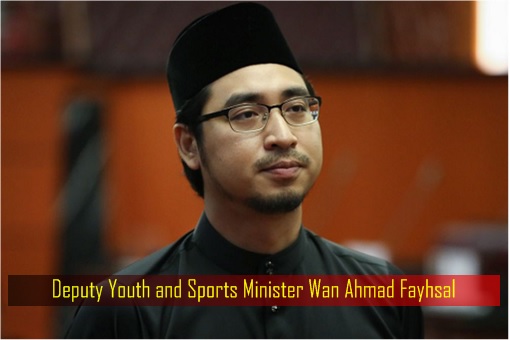 The “helicopter money” was coined to illustrate how large sum of money is printed and distributed to the public, as if the money is being dropped from the helicopter in the sky for all and sundry. If only this genius deputy youth and sports minister cares to use his brain to think, or at least gets his minions to check with Google, he would not have had made a fool of himself.

He just needed to ask himself one simple question – why former Prime Minister Najib Razak did not simply print money in his backyard, but instead had to steal billions of dollars by cooking a sophisticated and complicated 1MDB scandal. After all, Najib was also the finance minister. That means the central bank and the national coffers were basically under his thumb.

Yes, why didn’t Najib, the world’s biggest crook, print RM100 billion and gave it to his spendthrift wife Rosmah? Why took the trouble to steal, get caught, lost the 14th General Election and sent to 12 years in jail and fined RM210 million? Wan Ahmad Fayhsal must have thought that he was extremely genius for being the first person who discovers the idea of printing money.

As a graduate in chemical engineering from Universiti Teknologi Petronas, it’s puzzling that the deputy youth and sports minister possess such shallow intelligence. Did he really obtain his Master of Arts in Geopolitics, Territory and Security from King’s College London? It’s hard to believe he was a Research Fellow at Putra Business School, University Putra Malaysia.

There’s a reason why, with the exception of the U.S., it doesn’t work when a country tries to get rich or fix its economy by printing more money. Historically, there had been not one, not two, but at least 21 currencies that had gone bust (read here) due to hyper-inflation as a result of printing excessive money with the false hope of arresting economy or debt problems.

For example, from 1914, the inflation rate in Germany skyrocketed following the end of World War I. The Germany government started to print banknotes – lots of them – to pay its war debt. Many Germans literally carted wheelbarrows of cash to pay for groceries. In fact, workers actually brought wheelbarrows, sacks and suitcases to work just to collect their wages. 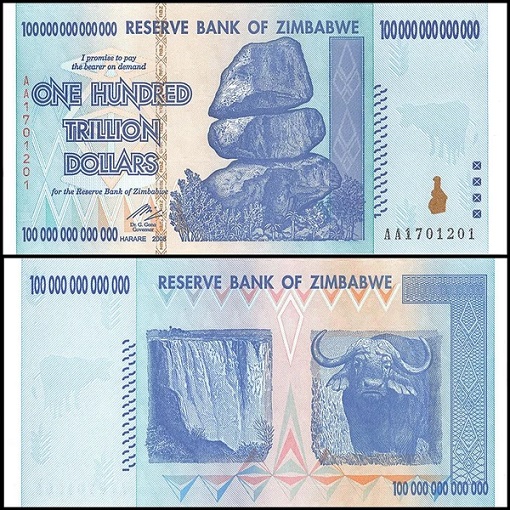 But not all inflations were caused by war. Argentina experienced high inflation from 1975-1990. Economic mismanagement saw how the country started printing money to contain the recession caused by the 1980s debt crisis. At the beginning of 1975, the highest denomination was 1,000 pesos. From early 1979 to end of 1981, the highest denomination jumped from 10,000 pesos to 1,000,000 pesos.

But the best story came from Zimbabwe. The then-president Robert Mugabe issued a 100 billion dollar bank note in July 2008. But by January 2009, a “100 Trillion Dollar” note was released – Zimbabwe’s highest denomination note and the biggest ever produced for legal tender. The 100-trillion dollar note, which was worth about US$5, unfortunately couldn’t buy a bus ticket in the capital of Harare.

As recent as 2019, Venezuela was the only country in the world that suffered from the ravages of hyperinflation. The country, despite having the world’s largest oil reserves, experienced hyperinflation for 36 months by Nov 2019 thanks to corruption and economic mismanagement under President Nicolas Maduro. Its inflation rate skyrocketed to 10,000,000 (10-million) percent.

If Wan Ahmad Fayhsal, the deputy minister who is still wet behind the ears, could not understand how printing money will trigger inflation, here’s a simple example. It’s all about supply and demand. For easier illustration, let’s assume Malaysian economy “only produces” 1,000 packs of “nasi lemak”. And let’s assume the money supply (demand for nasi lemak) is RM10,000.

Essentially, the average price of the “nasi lemak” will be RM10 a pack. Now, if the government prints and drops free cash of RM5,000, the total money supply will increase to RM15,000. But the number of goods remains the same. Because people have more cash, they are willing to pay more for the “nasi lemak” – the price will shoot to RM15 a pack, hence 50% inflation.

Printing more money would mean the price of commodities or goods skyrocketing to meet the demands. If everyone has twice as much money, but everything costs twice as much as before, obviously people aren’t better off. Getting the government to print money will not increase wealth. The value of money is tightly related to the quantity of goods available. 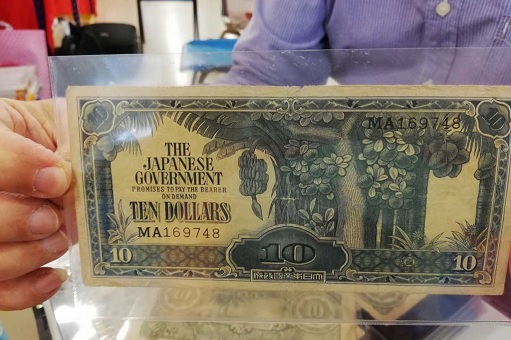 To make matters worse, international investors could lose confidence in a country if its central bank is directly financing the government. Money supply and exchange rates are meant to reflect the size of an economy. Therefore, if Bank Negara simply pumps out more money to pay off debt, as suggested by the deputy minister, the value of local currency – Ringgit – will drop against other currencies.

Yes, not only the silly Deputy Youth and Sports Minister wanted the central bank to print and give away free money, but also wanted peoples’ debt (most likely included his) to be erased with a snap of a finger. He hadn’t a clue that printing money will trigger inflation, which in turn will devalue the local currency – leaving the country poorer since the real wage of salaried workers does not increase.

Perhaps the incompetent and clueless backdoor Perikatan Nasional government didn’t realize that the country did experience hyperinflation before. Famously known as “Banana Money”, the Japanese forces introduced the new currency notes in then-occupied Malaya in 1942. With the Malaya’s economy at a standstill and to fund the authorities with money, the Japanese simply printed more notes.

By the middle of 1945, the Japanese estimated to have had printed 4 billion dollars, with active circulation 30 times greater than before the war. The banana money resulted in hyperinflation and a severe depreciation in value. When the Japanese finally surrendered in 1945, the currency became worthless and Japanese government refused to exchange the banana money notes.

But why the U.S. can print money whenever they like? Again, it’s back to the basic economy 101 – demand and supply. Remember the example of the Malaysian product called “nasi lemak”. While this product is in great demand in Malaysia, it is not a hot commodity in other countries. This statement is true even if you change nasi lemak to palm oil, Proton cars or even crude oil.

The U.S. produces a long list of products required by the world in huge quantity, ranging from Apple iPhone, McDonald’s hamburgers, Starbucks’ coffee, to IBM servers and Boeing aircrafts and whatnot. When the U.S. exports products or services, it creates a demand for dollars because customers have no choice but to pay for American goods and services in dollars.

In essence, the demand for U.S. dollars to make payment for American products or services puts pressure on the supply of the currency, increasing its value, hence enables the U.S. to print even more money to satisfy the global appetite. Over time, the U.S. dollar becomes the global currency, replacing the gold standard. Why do you think the U.S. likes to start a war, if not for weapons sales?

The continuous global demand for the U.S. dollar, on top of domestic strong consumption and the ability of the U.S. government to guarantee its debt has made the currency a “safe haven”. In the same breath, the Chinese Renminbi  became another world’s reserve currency in 2016. As of the first quarter of 2020, the world’s central banks held US$221 billion worth of the Chinese currency.

Thus, Wan Ahmad Fayhsal should ask himself if Malaysia is a military powerhouse like the Germans during World War I and II, or an economic powerhouse equals to the U.S. or China. Does the country produce great and expensive products like the Boeing aeroplanes or Lockheed Martin fighter jets? Or is Malaysia the world’s biggest manufacturing hub like China?

Exactly what can Malaysia export to the world that would create a great demand for the local currency? Exporting “Ketuanan Melayu”, the ideology of Malay supremacy espoused by the United Malays National Organization (UMNO), Malaysian Islamic Party (PAS) or Wan Ahmad Fayhsal’s own party Malaysian United Indigenous Party (Bersatu or PPBM) does not count.

But this man, who is himself a product of a culture of handouts, rent seeking and patronage as a result of decades of racist and discrimination policy New Economic Policy (NEP), argued that MMT (Modern Monetary Theory) says otherwise – a government that issues its own currency can always pay its bills by printing money, hence does not need to worry about accumulating large debts.

Well, the key principles behind MMT’s extraordinary theory was actually based on an admission in 2009 by former Federal Reserve chairman Ben Bernanke, who said the U.S. government’s US$1 trillion bailout of the banking system in the 2008 financial crisis was not taxpayers’ money, but rather printed out of thin air. Again, only the U.S. can do it for obvious reasons.

Did Wan Ahmad Fayhsal also realize that MMT’s model actually proposes to use tax to fight inflation, to control our behaviour and to get people to produce things the government needs? MMT economists say for the model to work, the government must run a permanent “job guarantee” program to provide full employment. But the idealistic model fails to tackle the issue of productivity or lazy workers.

Countries that print their own currency can afford to buy anything that’s available for sale in their own currency, says MMT. But is this true in the case of Malaysia? Not only the country is being run by corrupt politicians, but also consists of bloated civil servants, having racist and discrimination policies that spook investors and has accumulated RM1.3 trillion of foreign debt.