PETALING JAYA: Prime Minister Muhyiddin Yassin says there will be no lockdown or military rule in Batu Sapi, Sabah after a state of emergency was declared in the constituency.

He said the constituency in Sandakan will remain subject to the ongoing conditional movement control order (CMCO) imposed on Sabah. -FREE MALAYSIA TODAY

No curfew or military rule in Batu Sapi, says Muhyiddin

THERE will be no curfew or military rule in Batu Sapi, Sabah, said Prime Minister Muhyiddin Yassin after the parliamentary constituency was placed under emergency rule today.
The prime minister said the constituency in Sandakan will remain subject to the ongoing conditional movement-control order (CMCO) imposed in Sabah.

He said the emergency declared for the area is intended to cancel and postpone the Batu Sapi by-election in order to protect the lives of the people.

“The lives of the people in Batu Sapi will not be affected by this declaration of emergency. There will be no curfew or military-style rule in Batu Sapi.

“Government administration, economic activities and social activities can continue, subject to the practice of new norms and regulations as well as SOP under the conditional movement-control order currently in force in the state of Sabah,” he said in a telecast over television today.

Muhyiddin’s address to the nation came soon after the Yang di-Pertuan Agong assented to a declaration of emergency in Batu Sapi, Sabah as a pre-emptive measure to stop the spread of Covid-19, and as a result, postponing the parliamentary by-election set for December 5.

Al-Sultan Abdullah Ri’ayatuddin Al-Mustafa Billah Shah consented to the emergency after an audience today with Prime Minister Muhyiddin Yassin, who carried a proposal from the cabinet.

“Therefore, Sultan Abdullah has given his consent for the Proclamation of Emergency for P.185 Batu Sapi, Sabah to be implemented as a proactive measure to curb the Covid-19 epidemic,” the palace said in a statement today. – THE MALAYSIAN INSIGHT 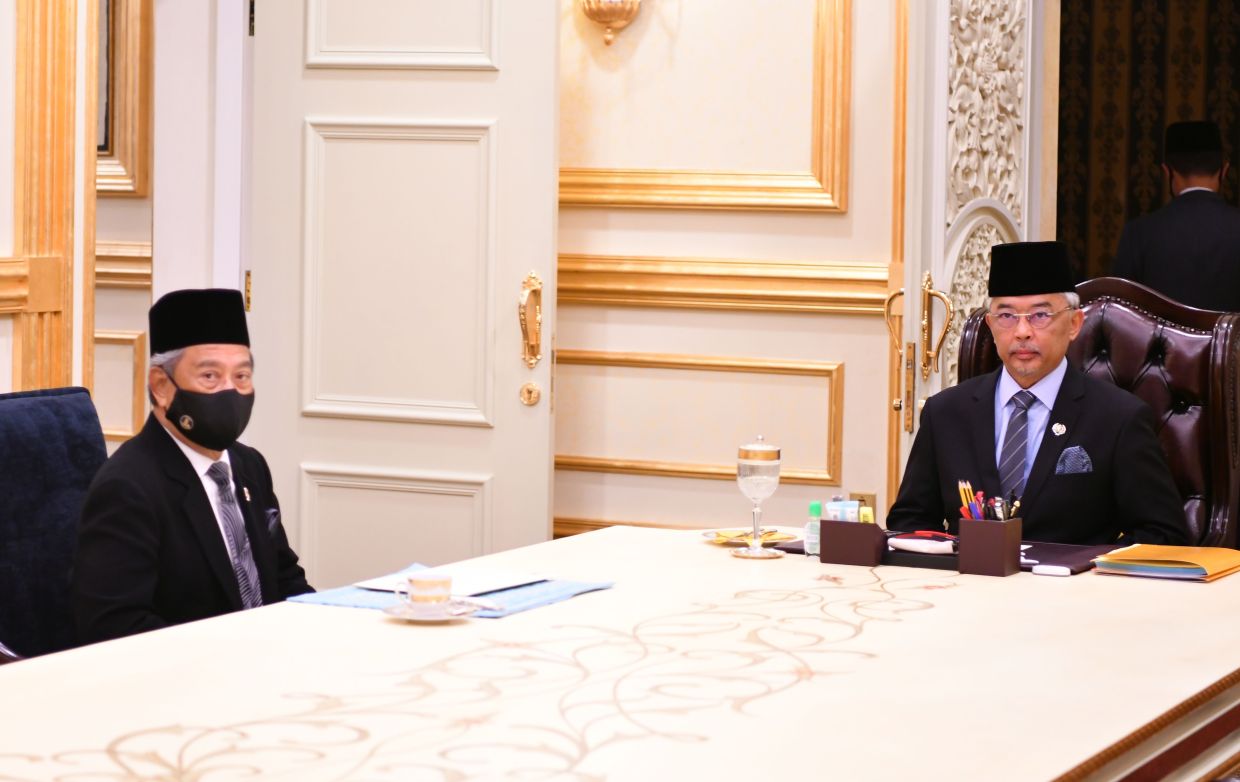 PETALING JAYA: The King has agreed to declare a state of emergency in Batu Sapi to cancel the by-election that was scheduled there for Dec 5.

In a statement, Comptroller of the Royal Household of Istana Negara Datuk Ahmad Fadil Shamsuddin said Muhyiddin met with Sultan Abdullah at 4pm on Wednesday for about an hour to present his advice to declare a state of emergency in Batu Sapi.

“Muhyiddin presented his advice to the Yang di-Pertuan Agong following a decision made at a Cabinet meeting.

“After listening to explanations from the Prime Minister and after briefings from Chief Secretary to the Government Tan Sri Zuki Ali, Attorney General Tan Sri Idrus Harun, Health director-general Tan Sri Dr Noor Hisham Abdullah and Election Commission (EC) chairman Datuk Abdul Ghani Salleh, His Majesty saw the need for a Declaration for a Proclamation of Emergency under Article 150(1) of the Federal Constitution to cancel the Batu Sapi by-election,” Ahmad Fadil said.

The proclamation also means any proceedings concerning the Batu Sapi by-election will be discontinued to prevent the spread of Covid-19 and prevent another wave of the disease from emerging.

The by-election will be held on a later date.

Ahmad Fadil said the Yang di-Pertuan Agong was concerned about the people’s safety following the sharp rise in cases after the Sabah state election on September 26.

“His Majesty believed it was necessary to cancel the by-election and postpone it to another date,” he said.

Ahmad Fadil said the Yang di-Pertuan Agong also took into account the number of registered voters living outside Batu Sapi who would have to return to cast their votes.

According to the EC, there are 32,962 voters in Batu Sapi, 3,170 who live outside the constituency, including in Sarawak and Peninsular Malaysia.

It is also estimated that 16,000 do not have complete addresses, which would make postal voting difficult.

The Yang di-Pertuan Agong also advised the people to continue to be vigilant and help the government curb the spread of the disease.

He also expressed his gratitude and appreciation for the frontliners and extended his condolences to those who lost loved ones to Covid-19.

“His Majesty also called on all Malaysians to stand united to fight the pandemic,” Ahmad Fadil said. – ANN