In a letter of demand sent to the Attorney-General’s Chambers on Sept 30, legal firm Shukor Baljit & Partners said Apandi categorically stated that his dismissal from office was unlawful and thus null and void.

“As a result, our client had suffered damages, including but not limited to, loss of earnings and other benefits from July 27, 2018 to July 26, 2021,” said the demand letter sighted by FMT. 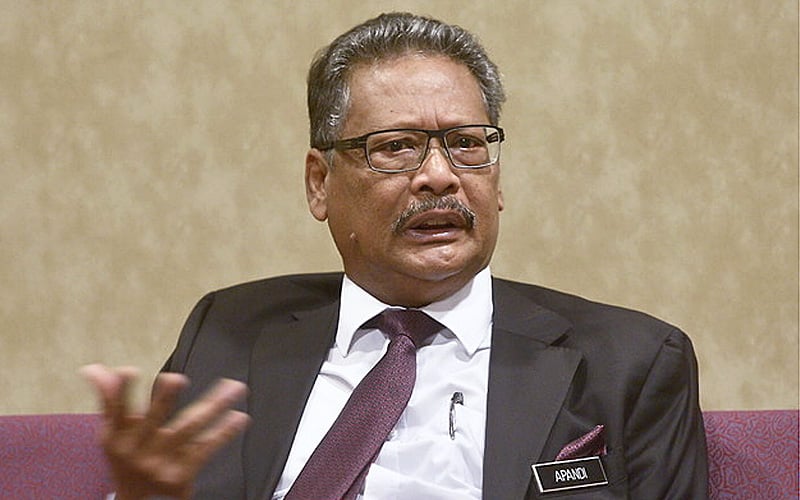 It is learned that monetary loss suffered by Apandi during that period is about RM2 million.

The legal firm said a suit would be filed after seven days of the notice unless Apandi received an offer of restitution and damages acceptable to him.

Apandi’s term had seen a series of controversies from the day he replaced Abdul Gani Patail whose services were abruptly terminated for what the government said were health reasons.

Also, in early 2016, Apandi cleared the then prime minister Najib Razak of wrongdoing in 1MDB, a bone of contention by Mahathir and the opposition he was leading.

The letter said Apandi, a former Federal Court judge, was appointed by the King on the advice of the prime minister (Najib) for a three-year period until July 26, 2018.

It said Apandi’s appointment could only be terminated by the King pursuant to Article 145 (5 ) of the Federal Constitution.

Just before the 14th general election in May 2018, Apandi’s tenure was extended by another three years.

Pakatan Harapan ousted the BN government with Mahathir returning as prime minister for the second time on May 10, 2018.

The letter said the chief secretary to the government in a letter dated June 5, 2018 notified that the King had consented to his termination but that there was no evidence to that effect.

It said the dismissal was decided by the prime minister himself, and that he had abused his position and committed the tort of misfeasance in public office.

“The prime minister had conducted himself with the intent to cause or induce a breach of contract between the government and our client,” the letter stated, adding that Mahathir’s conduct then was one of “colourable exercise of power”. The Malaysian Anti-Corruption Commission (MACC) celebrates the 53rd anniversary of its establishment today, and the stiffest challenge confronting it now is countering the increasingly ingenious tactics perpetrators of economic crime are resorting to these days.

Azam Baki, who was appointed chief commissioner on March 9 this year, said the use of digital technology by the perpetrators is making it difficult for MACC to detect their money trails.

“Their modus operandi is getting increasingly ingenious, and they are able to get around existing laws or systems,” he said in an exclusive interview with Bernama, recently.

Nevertheless, under the leadership of Azam, 57, the commission is determined to realise its vision of attaining zero corruption by implementing a slew of strategies, including the effective deployment of human resources, to address the challenges set to arise over the next five years.

Another challenge the MACC has to constantly grapple with is the public perception that the agency is not independent or seen to be independent and unable to discharge its duties professionally without “outside” interference.

Admitting that it is not easy to change public perception, Azam said since he assumed office, the government has proposed a couple of amendments which he feels would help to elevate public confidence levels.

Firstly, the appointment of the next MACC chief commissioner will be done through Parliament and will need the support of the members of Parliament.

Currently, under Section 5(1) of the MACC Act 2009, the appointment of MACC’s top post is made by the King on the advice of the prime minister.

Secondly, a service commission will be established under MACC to handle the recruitment and termination of service of MACC officers and staff which, currently, fall under the control of the Public Services Commission.

On Sept 2, Azam (photo) had told the media that these initiatives were decided at a recent meeting of the Special Cabinet Committee on Anti-Corruption, chaired by Prime Minister Muhyiddin Yassin.

Azam, meanwhile, said the Federal Constitution would have to be amended to allow Parliament to appoint the MACC chief commissioner and pave the way for the establishment of a service commission.

“These changes are among initiatives (by the government) to gain the trust of the people,” he added.

Other measures to gain public confidence include appointing a more professional enforcement team considering that MACC – previously known as the Anti-Corruption Agency – is now focusing on cases related to leakage of funds, issues of public interest and even national security.

Following a review of the first phase of its transformation programme (2011 to 2013), the MACC has taken the necessary steps to beef up the agency by improving the skills of its officers.

As such, the MACC encourages its officers to upgrade their academic qualifications. It is also collaborating with the UK-based Nottingham Trent University to allow MACC personnel to pursue undergraduate and postgraduate courses.

Touching on MACC’s direction, Azam said over the next three years its focus will be on fighting economic crime and helping the government to reduce leakages of public funds, which is all the more crucial now in view of the negative impact of the Covid-19 pandemic on the economy.

Widespread corruption, he said, can hike up the government’s procurement costs which will also affect its delivery system and devastate the nation’s economy.

“For now our focus is on corruption issues related to economic crime, but this doesn’t mean we will not prioritise other types of corruption cases,” he said.

“More improvements have to be made… previously MACC lacked the expertise, but now we have the ability to make a more accurate analysis and evaluation of any case,” he explained.

On the zero corruption vision, Azam admitted that it is not something that is easy to attain, adding that to date no nation in the world can lay claim to having zero corruption.

“If we want to talk about zero corruption, then we’ve to take a look at the frontliners who, in this case, are the enforcement personnel. If they are ‘clean’, then society will perceive the nation as clean too.

“So, in order to attain zero corruption, we have to correct the (behaviour of corrupt) frontliners, particularly those who deal with foreigners,” he said.

As for programmes to educate the public on the evils of giving and offering bribes, Azam said in line with advancements in technology and lifestyle changes, MACC is now spreading its anti-corruption message to youths via programmes such as the MACC PUBG (Player Unknown Battle Ground) mobile i-Challenge.

He said the corruption awareness programmes were bearing fruit as a number of cases handled by the MACC over the last three years were based on information received from whistleblowers.

“From 2016 to August this year, a total of 231 individuals (whistleblowers) were provided protection. Out of this number, 127 were public-sector employees while 30 were members of the public and private-sector workers,” he said.

He said the MACC, however, understood that many people were still reluctant to lodge complaints against corrupt practices.

“We would like to assure them that their protection is guaranteed under the Whistleblower Protection Act 2010. Under the Act, whistleblowers will be protected from detrimental action,” he added. –– Bernama