As proxy war gets ugly between two allies – PPBM and UMNO – in the Perikatan Nasional backdoor government led by lame duck Prime Minister Muhyiddin Yassin, more heavyweights from Peninsular Malaya (as Sabahans like to call the West Malaysia) are being flown to the Borneo state of Sabah. One of them is none other than former PM Najib Razak.

And when Mr Najib is in town, you can be assured of lots of twists and spins – and hilarious entertainment. Unlike the 2019 Sandakan by-election where he put up a drama wheeling a shopping trolley at a Sabah Giant Supermarket (which is 1,850-km away) and bought a pack of rice, oil, eggs, and “dates”, this time he has scrapped the cheap stunt for a good reason.

Najib’s celebrity persona had failed to hoodwink the Sandakan voters. His popular “Bossku” campaign, which worked wonderfully in Peninsular, didn’t work in Sabah. He screamed until foaming at the mouth that DAP was the “most racist party” in the country. Yet, DAP candidate, Vivian Wong Shir Yee, won with a massive 11,521-majority. Najib no longer dares play the racist card in Sabah. 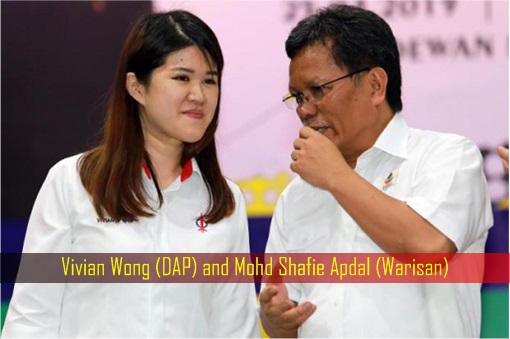 But Najib, despite having been sentenced to serve 72 years in prison (12 years as High Court Judge Mohd Nazlan said the jail sentences will run concurrently) for abuse of power, money laundering and breach of trust (CBT), has other tricks in the Sabah state election. The serial liar has been spewing truckloads of lies, thinking that Sabahans are bloody stupid.

In his latest rhetoric to help his UMNO party, which is being led by a clueless, incompetent and corrupt Sabah UMNO Chief Bung Moktar, former PM Najib claimed that only Barisan Nasional (BN) can “save Sabah”. The crooked Najib said only the BN coalition led by UMNO can defend the Borneo state’s sovereignty. He was referring to the Philippines’ claim over Sabah.

Najib said at a ceramah (campaign speech) – “During BN’s time, this issue never surfaced because they (the Philippines) respected us. But what has happened now? I was shocked when the Chief Minister (Shafie Apdal) made a statement urging the government to initiate negotiations with the Philippines. If people want to challenge Sabah’s sovereignty, ‘langkah mayat dulu’ (over dead bodies)”. 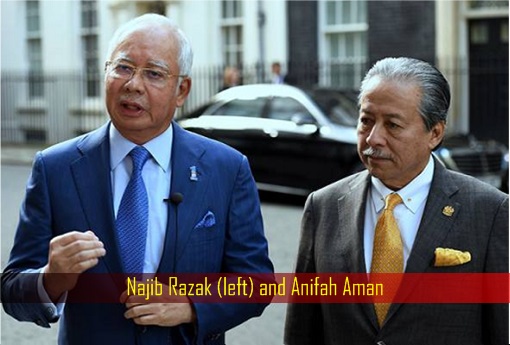 Apparently, Najib was trying to attack Sabah caretaker Chief Minister Shafie Apdal’s suggestion that the federal government of Malaysia should negotiate with the Philippines on the latter’s claim on Sabah using ASEAN platform. Actually, Shafie was trying to retaliate against former Foreign Minister Anifah Aman, who accused him of being silent on the issue of the Philippines’ claims.

Anifah, the brother of former Sabah Chief Minister Musa Aman whose 46 corruption charges were dropped by the backdoor Muhyiddin government, had tried to push the Philippines’ claims to Shafie. In any bilateral relationship, as in the case of Malaysia-Philippines, the diplomatic duties are the responsibility of a foreign minister (like Anifah), not a chief minister (Shafie).

So why Anifah did not do his job, but instead shifted the blames to Shafie for allegedly keeping quiet about the Philippines’ claims on Sabah? Going by his logic, can Kedah or Kelantan be accused of being silent if the Kingdom of Thailand suddenly claims both states? After all, the former Kingdom of Siam once ruled over territories of Kedah, Perlis, Kelantan and Terengganu. 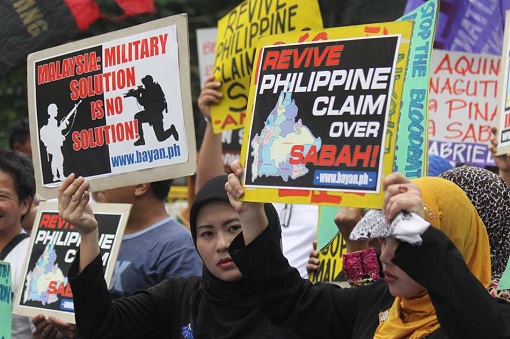 It was ugly politics, of course. Anifah formerly served under Najib administration as the Minister of Foreign Affairs from 2009 to 2018. A former member of UMNO, Anifah quit the party after the scandal-plagued Najib regime lost power in the 2018 General Election. Now, get your popcorn ready. Exactly what Anifah Aman, Najib Razak and Hishammuddin Hussein had done to protect Sabah in 2013?

In 2013, some 235 armed Filipino militants arrived by boats in Lahad Datu District, Sabah. Sent by Jamalul Kiram III, one of the claimants to the throne of the Sultanate of Sulu, the invasion to claim the eastern Sabah had caught the Malaysian government off guard. The Barisan Nasional government under Najib leadership was in total chaos and panic as they had never expected the intrusion.

Any kindergarten kids will tell you that the invasion was a humiliation to the BN government – not a show of respect as claimed by Najib. Exactly where was the former PM when Sabah’s sovereignty was challenged by the Philippines militants? Hilariously, despite Najib’s boastful talk about “langkah mayat dulu” (over dead bodies), he was the same PM who said his government would negotiate with the terrorists. 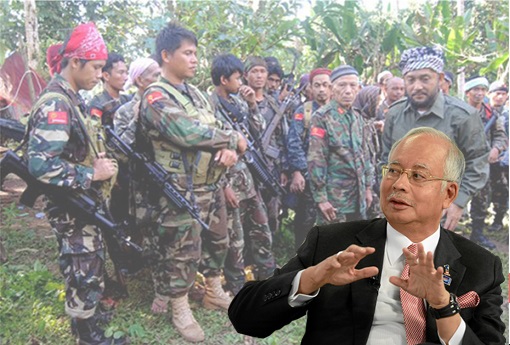 After PM Najib announced on Valentine’s Day (February 14, 2013) that his government, shocked by the Sabah invasion, would negotiate with the 235 invading militants, then-Inspector General of Police (IGP) Ismail Omar said negotiations with the group were in progress to find the best solution without bloodshed. But the incompetency of Najib’s BN government had just begun.

Like his cousin Najib, the clueless (former) Home Minister Hishammuddin was running around like a headless chicken during the Lahad Datu crisis. Approximately 2 days after Najib administration started negotiation with the invaders, Hishammuddin played down the invasion – claiming that the group merely comprised “malnourished” and elderly men in sarongs and slippers, mostly unarmed.

Sending a boy to do a man’s job was a disaster. Instead of entrusting the Malaysian Armed Forces to quickly get rid of the so-called 235 “malnourished” and ill-equipped militants, Home Minister Hishammuddin took the opportunity to perform multiple PR stunts. As people started asking about the whereabouts of Navy’s Scorpene submarines, the home minister dragged his feet. 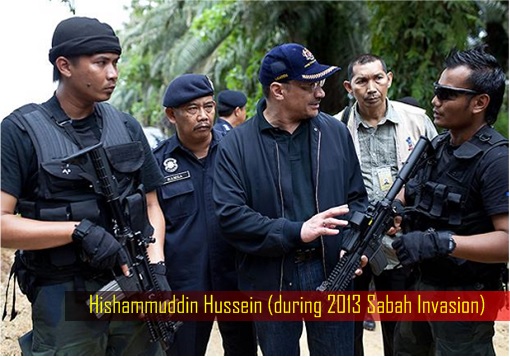 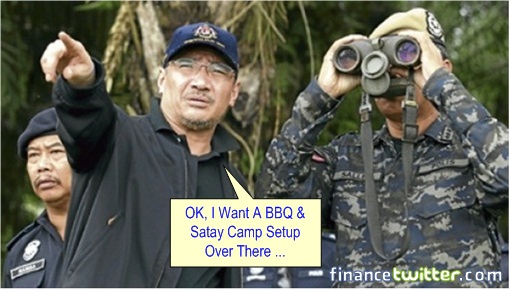 In fact, it would take a few days after the intruders were sighted on Malaysian shores before Malaysia security forces could establish the Sulu militants’ identity and intention. Heck, it was after the militants had flown their flag to challenge the country’s sovereignty that Hishammuddin realized the drama was actually a real invasion. Even so, he was optimistic of overpowering the invaders.

Both Armed Forces Chief Gen Zulkifeli Mohd Zin and Inspector-General of Police Khalid Abu Bakar were totally a joke too, as they joined Home Minister Hishammuddin in his “Rambo” publicity stunt. Later, even Defence Minister Zahid Hamidi too joined the party, appearing on the front page of national newspapers dressed in army fatigues, as if he was Arnold Schwarzenegger.

Therefore, someone should knock on Najib’s head to remind him of the 2013 Lahad Datu invasion. Under Barisan Nasional government and his leadership, the country almost lost Sabah to some Filipino militants. And under UMNO, the Borneo state’s sovereignty was challenged by “malnourished” and old men in sarongs and slippers. 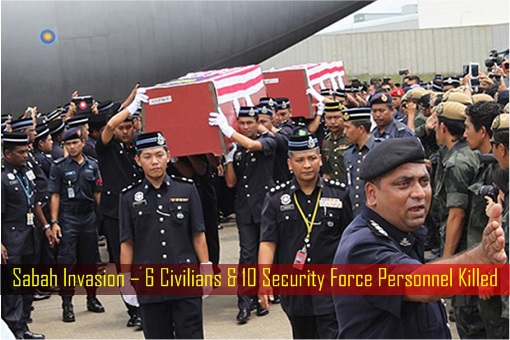 Why was it not wrong for Najib Razak to negotiate with the Philippines militants in 2013 but is wrong for Shafie Apdal to merely suggest that the federal government negotiates with the Philippines in 2020 on the same issue – the Sabah’s sovereignty? Najib has conveniently ignored the fact that 6 civilians and 10 Malaysian security force personnel were killed during the Sabah invasion.

Najib, and Hishammuddin for that matter, has no right to criticise Shafie because the last time some foreign invaders challenged Sabah’s sovereignty, there were 16 dead bodies thanks to the Barisan Nasional government incompetency. In the same breath, what did Anifah do as a foreign minister in defending the sovereignty of the Borneo state?

Someone should also slap Najib to wake him up to the fact that under his brilliant leadership, the country had lost not one, but two Boeing 777-200ER jumbo jets – the missing Flight MH370 in March 2014 and the shooting down of Flight MH17 in July 2014. Najib Razak is the only leader in the history of Malaysia to have had achieved such greatness. 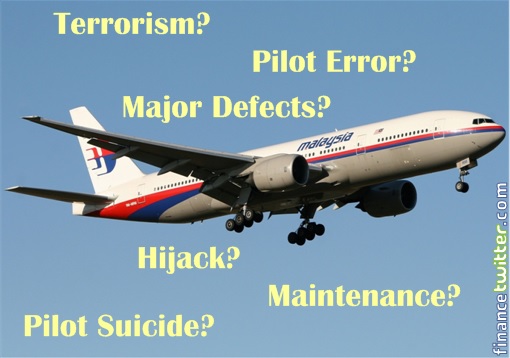 Not only Barisan Nasional under the corrupt leadership of Najib had allowed a bunch of malnourished old militants easily breached the security and sovereignty of Sabah, not to mention the spectacular lost of two Boeing jumbo jets, but also put Malaysia on the international map when the prime minister becomes the world’s biggest crook.