Referring to the Philippines’ claim over the state, Najib criticised caretaker Chief Minister Shafie Apdal for urging the federal government to discuss the issue with the Philippine government in order to resolve the matter.

“During BN’s time, this issue never surfaced because they (the Philippines) respected us,” he said at a ceramah at Kampung Sembulan Lama here tonight.

“But what has happened now? I was shocked when the CM made a statement urging the government to initiate negotiations with the Philippines. “If people want to challenge Sabah’s sovereignty, langkah mayat dulu (over our dead bodies … if people want to bring back Lahad Datu (incursion), we will fight to the end … to save Sabah, only BN can do it.” 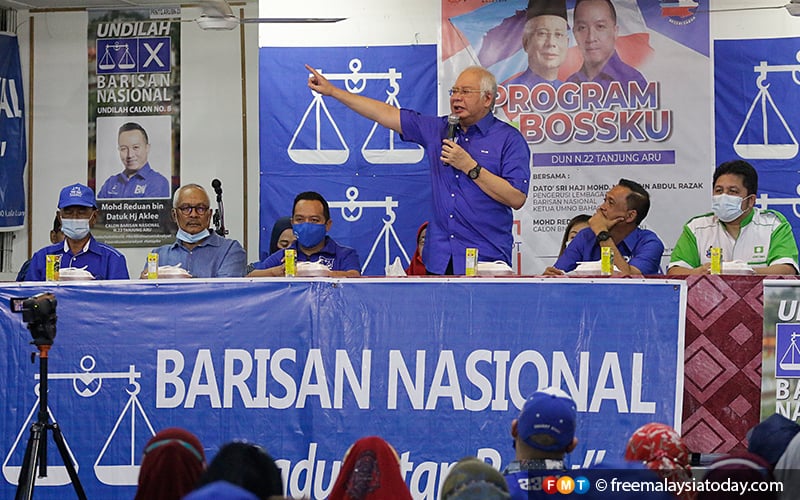 Days earlier, Najib had also criticised Shafie in a Facebook posting when he blamed Shafie for stirring up Manila’s claim over Sabah by urging Putrajaya to have government-to-government talks to resolve the issue.

At tonight’s ceramah, Najib said when he was prime minister, the Philippines was grateful when he brokered peace talks between the country and the Moro Islamic Liberation Front in Kuala Lumpur.

“This is the height of being a nation when people ask for your help … that means we are strong,” he said, adding the same could not be said of Warisan.

Meanwhile, Najib noted it was about time Sabahans embraced the change taking place in the country’s political landscape, claiming the people in the peninsula have already rejected Pakatan Harapan.

He said in the previous by-elections in Chini and Slim, BN clinched landslide victories over their rivals. “That means PH has been rejected in the peninsula. So it is time Sabah does the same (with Warisan Plus), don’t be fooled twice,” he said.

KOTA KINABALU: The race to win the hearts and minds of the people have shifted into full gear with just a week left to polling day.

Perikatan Nasional (PN) and Barisan Nasional (BN) are sending its big guns all over the state to offer support to its candidates while Warisan Plus is also backed by leaders from Pakatan Harapan who have taken their message statewide.

One of the hotly contested areas is Putatan, a coastal parliamentary area next to the state capital. It contains three state seats, namely Tanjung Aru, Petagas and the new seat of Tanjung Keramat.

Besides being one of the most heavily populated locations in the state, Putatan is also home to two of the states’ main transportation hubs – the Kota Kinabalu International Airport (KKIA) and the railway station.

Putatan is one of the smallest parliamentary constituencies in Sabah but interestingly, much focus has been put into the three state seats by BN and PN over the last week.

A host of political bigwigs had visited Putatan, including Prime Minister Muhyiddin Yassin who gave a rousing speech during his visit to the people’s housing project in Tanjung Keramat on the eve of nomination day.

Petagas and Tanjung Aru were once a BN fortress but the coalition lost the seats in the last general election (GE14) to Warisan and are determined to wrest back the seats with the help of PN, who are themselves keen on being the first to win the new Tanjung Keramat seat.

Sabah Umno communications director Ghazalie Ansing said BN is out to avenge their defeat in GE14.

“We are getting all the help we can from our machinery because we want to retake the state government from Warisan Plus who have failed from all aspects of governance.

“According to our research it’s going to be tough. The (main) candidates have a 50-50 chance of winning the seats. There are no easy fights but we are confident,” he told FMT.

He said having a high number of urban seats is important for the image of the ruling party.

“It is important for these seats to be aligned with the federal government to ensure continuous development.

“But of course, our leaders are visiting all the seats in Sabah,” said Ghazalie.

Despite all the seats having multi-cornered fights, BN and PN’s main challenge comes from Warisan Plus.

Warisan vice-president Junz Wong is defending his Tanjung Aru seat, Awang Ahmad Sah will be contesting in Petagas and Rosdy Wasli of Amanah, who is contesting under the Warisan banner, in Tanjung Keramat.

Warisan president Shafie Apdal believes that the opposition are sending the bigwigs as they know there are no guaranteed seats.

“They know the power is not with them – the power is with Sabahans now who will determine who’s going to be the government of the day,” he said after campaigning for the three Warisan candidates in Putatan yesterday.

“The voters have every right now to determine who’s going to be in power in Sabah, not them (the opposition),” the caretaker chief minister said.