I received the following from KC Choong (thank you).

KC Choong is obviously a strong supporter of Rafizi Ramli. And here is the story that was attached : 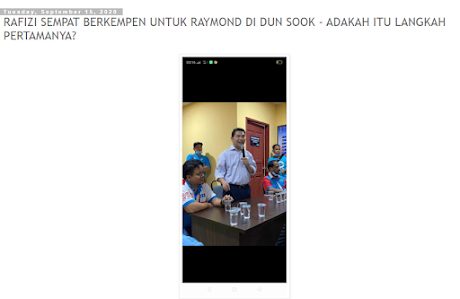 My comments :  Folks my stance is this. I am not going to support anyone party or any one politician permanently anymore. I am also not going to support everything that anyone says. I will only support issues and platforms that I agree with which are also adopted by any political party or by any politician. In the same light I will criticise any  issue or platform that I do not agree with that may be adopted by any party or politician.

(Yes this is still a free country. I have the freedom to agree or disagree with whatever I wish. That is my absolute right.  In the same light you also have the absolute right to agree or disagree with what I say. No one, I repeat, NO ONE, asked you to come to this blog to read what I say. This is a free country. This is freedom of thought and speech.)

So Rafizi Ramli is making a comeback. He should since he is certainly popular with the people. I believe Rafizi is far more popular than Anwar Ibrahim. And I believe it was Rafizi Ramli’s relentless campaigning in PRU15 that helped PKR win their seats as well. Remember that at time Anwar Ibrahim was sitting inside the jail.

Rafizi Ramli is in a class of his own. First of all Rafizi was the Top No. 1 Student at the Malay College in Kuala Kangsar.  He is also a university graduate in Engineering and Accounting from the UK.

In sharp contrast both Anwar Ibrahim and Azmin Ali are far less illustrious.

Rafizi is also known as a straight talker and a straight shooter. His commitment to anti corruption appears genuine (Rafizi do not let me down – you will regret it).

Rafizi is still a little blur on economic issues. What exactly is his stand? Also I believe he is still “learning” when it comes to economics and business. If you do not believe in an open and free market then you will repeat the mistakes of the past 60 years again. And again. There are no err..err, but or what ifs. Everything has to be dismantled. Be clear about this. If you are not clear you will fail.

That Big Data, Invoke etc was just riding a fad. It is not what Big Data is really. Big Data is just how many transistors can be squeezed onto a micro-chip. It is computing power or how many calculations per second.  Before we used to call  them ‘super computers’. Now Seymour Crays supercomputing power of the 1980s and 1990s can be fitted in your laptop and even your smartphone.  This is the age of handheld supercomputing.

Your Google Maps in your smart phone is really, really Big Data. It is Giga Data. But we do not realise this when the Google girl tells you, “In 200 metres slide left” (which is grammatically incorrect, it should be ‘Slide left in 200 metres’).  Folks we will never be lost again. Thanks to computing power which is what Google Maps’ Big Data is all about. So it is what you do with the computing power that is available to you.

Back to Rafizi, he would certainly be a better candidate not just to be Deputy President of PKR but Rafizi should actually lead PKR itself.  If that happens there is a possibility for PKR to win more than 50 seats on its own. Perhaps even 60 seats.

With Anwar Ibrahim at the helm PKR will possibly get wiped out in PRU13. In Sabah Anwar Ibrahim has already failed. PKR Sabah has only been allocated SEVEN State seats to be contested.  Malu-lah ! Anwar Ibrahim should resign. And lets see how many seats PKR can actually win.  PKR is not a force at all.

Rafizi and Nurul Izzah both “quit” politics after that Yusuf Rawther case.  Nurul Izzah seems to have permanently disappeared but Rafizi is making a come back. It is best for Nurul Izzah to come back as well.

Rafizi Ramli must realise that he bet on the wrong horses. By ‘wrong horses’ I mean Anwar Ibrahim and gang (yes including Azmin Ali at one time).  Perhaps that Yusuf Rawther case made Rafizi open his eyes a little bit more.

Rafizi Ramli must realise that elections come by once every FIVE years. Each PRU, you are FIVE years older. At 43 years Rafizi still has youth on his side.  But the more time passes and you do not succeed, your own party will pass you by.

The problem is Rafizi is still riding on Anwar Ibrahim’s coattails. That is indeed a slippery slope. Plus coat tails hang over the brader’s ass.  Recall “Yusuf Rawther”. That case actually made you ‘quit’.  Do you think that was the last ?

But by now Rafizi must realise that Anwar Ibrahim has got less momentum (intellectually and politically) than a sack of potatoes that fell off a kereta lembu. Everything he has touched and done has been a failure.

He rode ABIM. Where is ABIM now? Where are his ABIM buddies now? Failures.

He rode with the Muslim Brotherhood. Where is the Brotherhood now? Disastrous failures.

He joined UMNO. What happened to UMNO? They became failures. Ultimate failures.

He set up PKR. What happened to PKR? They almost died. More failures.

Two things and two things only “revived” PKR. 1MDB and Tun Dr Mahathir running under the PKR logo in PRU14. Nothing else.

Even then you and Izzah quit (after winning PRU14!! What ??) Inexplicable.

And now PKR has been allocated only SEVEN seats in Sabah. Failure.

Anwar Ibrahim is living up to his true calling – he is a failure.

As long as Rafizi Ramli is latched on to this monumental failure called Anwar Ibrahim, Rafizi will also fail. Or has failed – because Rafizi already “quit” remember? Now you are making a comeback. 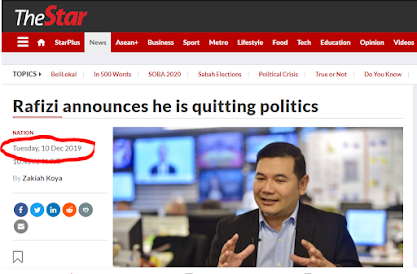 Brader Rafizi you cannot make a comeback wearing the same colours and carrying the same banners that made you quit politics in December 2019.

What is that new thing you can offer the people WHICH MUST BE DIFFERENT from those things that made you quit PKR in December 2019?  You must bring something new.Strike your own path. Show the people your real mettle. Here is a secret : the PKR party and the Malaysian voters in general are ready for some new light to shine at the end of this dark tunnel. Be that light.