Like his predecessor Najib Razak, backdoor Prime Minister Muhyiddin Yassin is a publicity seeker. The only difference is that while Mr. Najib prefers international publicity, the village champion Mr. Muhyiddin likes to do it domestically. That was why Najib golfed with Barack Obama, and paid lobbyist for an invitation from U.S. President Donald Trump to visit the White House (which eventually backfired).

Muhyiddin, restricted by Covid-19 pandemic, has so far met local popular YouTubers like couple Sugu Pavithra and Veveonah Mosibin. However, it was no coincidence that the prime minister had arranged for the 18-year-old Universiti Malaysia Sabah (UMS) student and her parents to dine with him in the middle of Sabah state election. It was nothing but a publicity stunt.

Veveonah, who hails from Kampung Sapatalang in Pitas, Sabah, gained popularity after a video of her climbing a tree to gain better internet access to sit for an online examination during the Recovery Movement Control Order (RMCO). The pretentious PM Muhyiddin knew the Sabah village girl was too naive to understand politics, hence used her to portray himself as a humble leader. 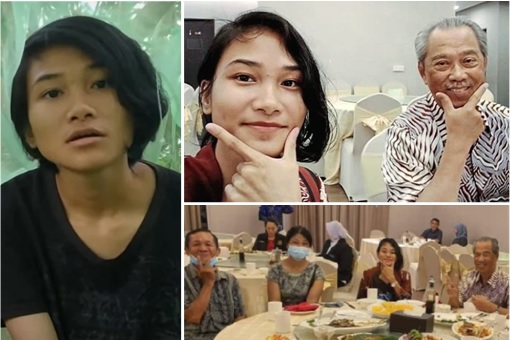 Exactly what has PM Muhyiddin done after his Deputy Communications and Multimedia Minister Zahidi Zainul Abidin and Deputy Finance Minister Abdul Rahim Bakri spread false accusations that Veveonah was a publicity seeker who made the video to gain “attention and publicity”? That’s right, the lame duck and “munafiq (hypocrite)” prime minister kept quiet and did absolutely nothing.

It would take more than a publicity stunt like having a dinner with the Mosibin families to win the Sabah state election. The simple fact that the poor Sabah family has access to the Internet, albeit at the speed of a snail most of the time, speaks volumes that people of Sabah increasingly do not depend on government-controlled news media, which had been feeding them propaganda.

However, the two deputy ministers who ganged up and bullied Veveonah were not the only despicable leaders in Muhyiddin government who have upset the people of Sabah. Voters in the Borneo state still remember how other leaders of the backdoor Perikatan Nasional government had taken turns mocking, belittling, threatening and insulting the Sabahan. 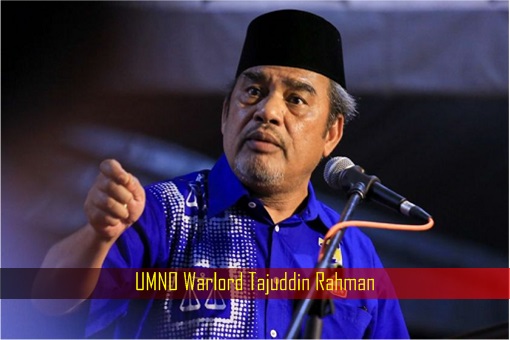 The Sabahan still remembers how UMNO warlord Tajuddin Abdul Rahman falsely and arrogantly proclaimed in July that the rights of the Malays should not be questioned because they were the original people of Malaysia. Tajuddin said – “Some may not want to accept that this is Tanah Melayu, and maybe some people from the outside do not want to accept this.”

Tajuddin’s racist and incorrect statements were immediately shot down by Sabah Deputy Chief Minister Wilfred Madius Tangau. The Sabah-based UPKO MP lectured Tajuddin, who was appointed by PM Muhyiddin as Prasana Group chairman, that the Peninsula ceased being called “Tanah Melayu” after 1963 when Malaysia was formed with Sabah, Sarawak and Singapore.

Wilfred said not only Tajuddin’s remarks were factually and historically wrong, but also showed that UMNO, and the Muhyiddin government for that matter, still possessed the mindset that the country was still the Federation of Malaya and not Malaysia (Malaysia was formed in 1963 based on an agreement between the U.K. and Federation of Malaya, North Borneo, Sarawak and Singapore). 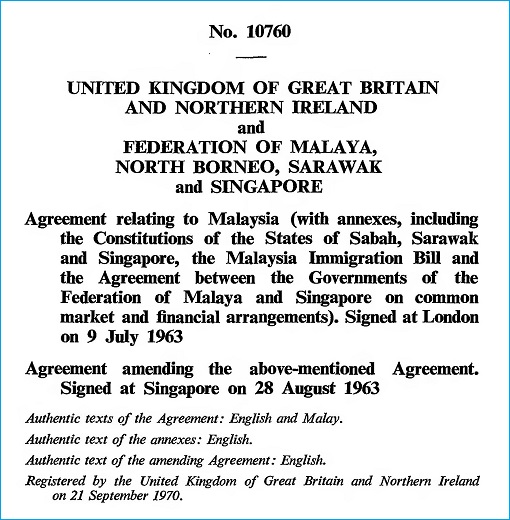 Then in August, it was Muhyiddin’s own party (PPBM or Bersatu) that played racist card, threatening to close down vernacular schools. Deputy Youth and Sports Minister Wan Ahmad Fayhsal Wan Ahmad Kamal, who is also the PPBM’s Youth Chief, declared that he will continue to support the abolishment of vernacular schools in the country. 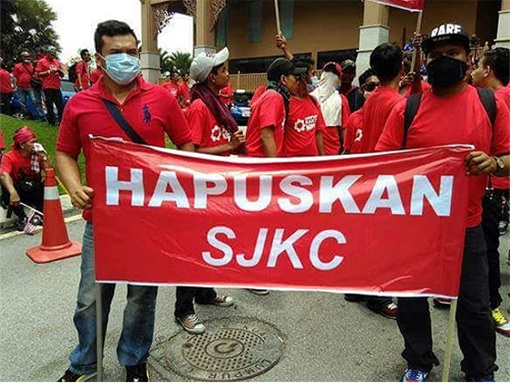 Clearly, Muhyiddin’s boy should be investigated and charged for having violated the Sedition Act 1948 because according to the Article 152(1)(a) of the Federal Constitution – no person shall be prohibited or barred from using (other than for official purposes), or from teaching or learning, any other language. The disgraced deputy minister was trying to destroy the education of non-Malays.

But did the racist Muhyiddin government, who has only a 2-seat majority in Parliament realised that 71.5% of Sabah SJK(C) students are non-Chinese? The suggestion to abolish vernacular schools had attracted fierce criticism from both sides of the political divide in Sabah, included Parti Bersatu Sabah (PBS), Sabah Progressive Party (SAPP), Sabah DAP and even Sabah MCA.

Perhaps even PM Muhyiddin didn’t know that on September 2019, the Sabah government under Chief Minister Shafie Apdal decided to recognise the Unified Examination Certificate (UEC). Essentially, the recognition enables not only UEC holders to enrol into public higher learning institutions in Sabah, but also enables them to enter the State’s public service. 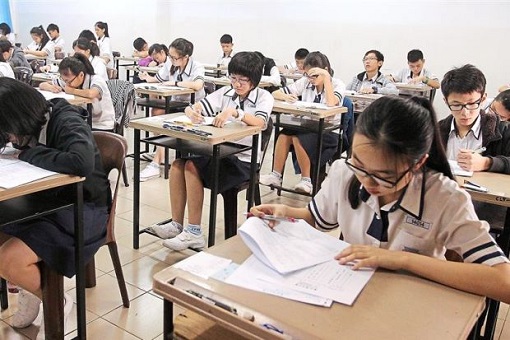 The attacks on minorities did not stop even after UMNO Tajuddin’s warning to second-class citizens of the (non-existent) “Tanah Melayu” in July and PPBM Youth Chief’s threat to abolish vernacular schools in August. PAS Islamist party joined the bandwagon when its MP Nik Muhammad Zawawi Salleh said in the Dewan Rakyat (Lower House of Representative) that the Bible has been distorted.

Despite public outrage over his insulting comment, the arrogant and extremist MP from PAS has said that he had no reason to apologise – claiming his statement was a “fact”, and even suggested that the Christian community had “no right to be offended”. Yes, Muhyiddin government is so bloody racist, extreme and arrogant that the minorities don’t even have the basic right to be angry.

Had a non-Muslim made a similar remark that the Koran or Quran was distorted, you can bet your last dollar that all hell will break loose. Sabah leaders and churches wanted the defiant PAS leader to be investigated for sedition. Again, as in the case of “Tanah Melayu” and vernacular schools, the so-called moderate PM Muhyiddin pretended nothing had happened. 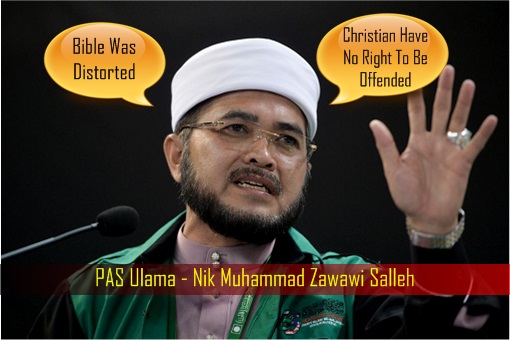 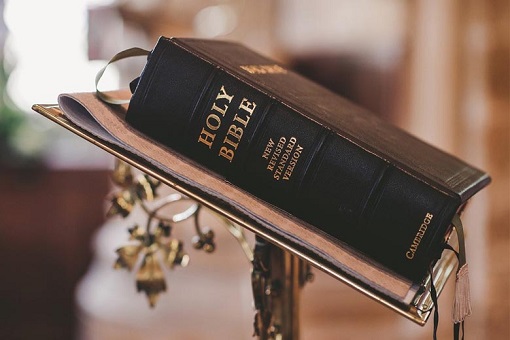 Both PPBM President Muhyiddin Yassin and UMNO President Zahid Hamidi might think that by temporarily abandoning their toxic ally PAS, refusing to give any seat to the Islamist party to contest in the coming September 26 election, the Sabahan could be hoodwinked. They hope that ignorant Sabahan would forget how Peninsular Malaya mocked and ridiculed the Bible.

But Sabahan Christians knew very well that PAS is protected by both PPBM and UMNO, especially the prime minister. The UMNO-PPBM-PAS racist federal government did not realise Christianity is the second largest religion in the Borneo state, constituting about 26.6% of the 3.6-million population. The Malaya from Peninsular also didn’t realise that there are 42 ethnic groups in Sabah.

In fact, only 5.7% Sabahan are ethnic Malays. Even though Islam is the largest religion, non-Malay and other indigenous people form the majority population – about 60%. The three largest indigenous groups are the Kadazan-Dusun (17.8%), Bajau (14%) and Murut (3.2%). Even within the Kadazan-Dusun grouping, they spoke a jaw-dropping 13 main languages. 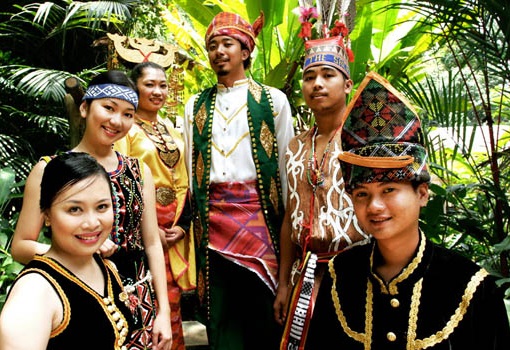 Other “bumiputera (son of the soil)” make up 20.5% of the Sabah population, while Chinese’s population is about 9.1%. But due to the tight Malay culture and language policies over national schools, many Sabahan bumiputera parents have preferred to send their children to Chinese vernacular schools. That’s because non-Chinese parents believe Chinese schools provide a better quality education.

Now, do you understand why scumbag racists like UMNO warlord Tajuddin and PPBM leader Ahmad Fayhsal were as quiet as a church mouse after Sabah leaders screwed them left, right and centre? In Sabah, a Muslim does not necessarily translate to a Malay ethnicity. A threat to abolish vernacular schools actually means threatening Sabahan bumiputera parents.

But Muhyiddin’s best friends in PAS Islamist party still haven’t realised the mistake of insulting the Christianity and Bible. Disappointed that PAS was not “invited to contest” in the Sabah election, PAS women chief announced that Sabahan cannot go to heaven as they are unable to vote for PAS. Perikatan Nasional and Barisan Nasional will pay the price for playing religious bigotry and racial extremism. 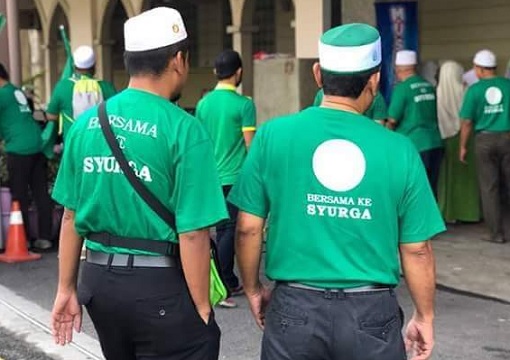