KOTA KINABALU: United Sabah National Organisation (Usno) will fight for a deputy prime minister’s post for Sabah or Sarawak if it wins in the upcoming Sabah state election.

This pledge is contained in the party’s election manifesto launched by its de facto chief Pandikar Amin Mulia here today.

Speaking at the ceremony, Pandikar said the Usno 2020 manifesto was divided into two sections: New Negotiation and New Deal which contained five and eight elements respectively.

He said the manifesto was drawn up based on several factors including changes in the sentiment as well as the current relationship between the Sabah and federal governments.

He said the pledges in the manifesto were aimed at raising the dignity and well-being of Sabahans.

He said the manifesto promised to ensure the appointment of a senior minister from Sabah in the Federal Cabinet for portfolios such as finance, rural development, education and defence. 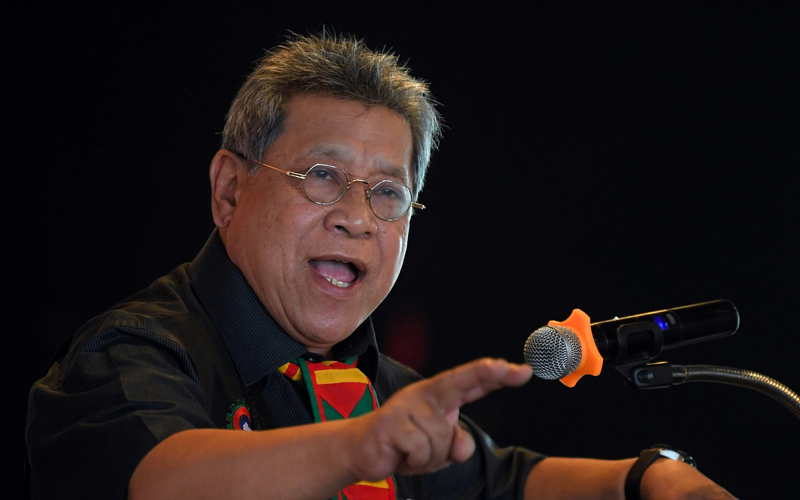 Pandikar said Usno also wanted to ensure that all the posts of heads of federal departments and agencies in Sabah were given to Sabahans.

He said the manifesto also outlined Usno’s promise to strengthen security for the people, including by ensuring that the issuance of citizenship documents in Sabah be managed and approved by the state government.

He said Usno also pledged to continue to develop the state’s infrastructure and ensure that the basic needs of the people were looked into.

He added that the party would review the petroleum revenue and royalty and ensure that Sabah is allowed to borrow funds and issue bonds outside the country with federal government guarantees.

On the New Deal, Pandikar said the points included ensuring a clean government, with all government dealings to be based on merit and the needs of the people.

He said the manifesto also pledged to ensure that all taxes in Sabah were collected, managed and distributed by the Sabah Inland Revenue Board before they were shared with Putrajaya.

KOTA KINABALU — Tan Sri Muhyiddin Yassin today unveiled Gabungan Rakyat Sabah’s (GRS) manifesto that focuses on reviving the state’s economy, which he said can only be fulfilled if the federal and state governments work together.

Dangling the carrot of federal funding in front of voters as crucial to fulfilling the promises, the Perikatan Nasional chairman said that Sabah, with its dispersed population and vast land areas, needed major development to take it to the next level.

“The manifesto was given to me to announce as prime minister because it involves cooperation between the state and federal governments, which is of utmost importance,” he said.

GRS comprises Perikatan Nasional (PN), Barisan Nasional (BN) and Parti Bersatu Sabah (PBS).
“I believe this is what Sabahans want. Things are hard right now, and in these unprecedented times, we cannot just promise the usual like other elections.

“So this is our total commitment to raise Sabahans’ livelihoods to the next level,” he said during the manifesto’s launch at Sutera Harbour Resort here today where members of the Opposition alliance had gathered.

Meanwhile, Sabah PN chief Datuk Hajiji Noor described the manifesto as the Opposition’s main plan to revive the economy after it was allegedly left in shambles by the Warisan government.

“We are offering much-needed facilities and infrastructure,” he said.

When pushed for a timeline, he said that this was promised for the coming five-year term.

“We cannot do this in one or two years. Things like infrastructure take time. Roads can take two to three years to complete. If we have allocations, we can do it. We need a continuous mandate to ensure the manifesto promises are achieved,” he said.

The 16th Sabah state election will take place on September 26 where some 16 parties are vying for votes in 73 seats.