Messages Pour In For Najib From All Over The World 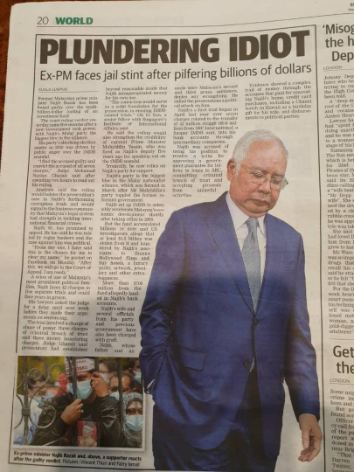 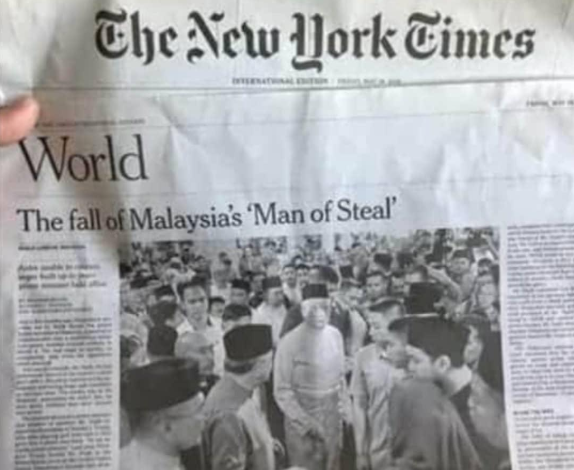 Updated : “the judge cast doubt on whether the former prime minister’s legal strategy can be effective in his upcoming trials” – New York Times

“the judge cast doubt on whether the former prime minister’s legal strategy can be effective in his upcoming trials” – New York Times.
(https://www.nytimes.com/2020/07/28/world/asia/malaysia-1mdb-najib.html)
Well first of all a great big thank you :

Here is a poem that appeared in today’s New York Times by one Tim Torkildson of Utah (in the USA) about Najib Razak :

Using banks as willing foils
he made movies with his spoils

Though they bombed, he still got rich
as Hollywood he did bewitch

But when politicians cheat
they are awful hard to beat

They will do you favors, chum
then expect a  tidy sum

I expect we’ll see him soon
on the next flight to Musk’s moon . .

My comments : Musk’s moon must refer to Elon Musk going to Mars.
Its one way.  No return.

Anyway, months ago I received a telephone call from a staffer in the office of a very long time Member of Parliament (who I know quite well)  saying that Najib Razak wanted to meet me.

I believe the call was prompted by one of my blog posts at that time where I had said that Najib “did not listen to me before” – referring to the days when I had met Najib at his house and on other occassions. Obviously Najib had changed his mind and was prepared to listen to me now. Well, I said I would have to call back – which I did not.
Anyway I have ALREADY BLOGGED those things which I would have told Najib.
And lo and behold ALL of those things have now happened already.
ALL of those things have now become another “I TOLD YOU SO”.


First of all I would have told Najib what I have already blogged more than once – that the defence of ‘I dont know how the money got into my account‘ was the most imbecilic and asinine defence strategy anyone could have thought up.
I have been repeating this point since the trial started.
And now it has been proven correct.
And I am not even a lawyer (but I did study some Law).
I am not crowing ok – a thousand other people were saying the same thing about Najib’s legal team’s “I dont know” strategy.  It was actually a “no strategy”.

(Updated) The New York Times report (on which this is based) says :
Ha ha ha. Ho ho ho

“You spent large sums using your credit card”
“Yes. But I did not know.”


So my advice to Najib is get new legal counsel.
Or you may just breathe your last in jail.
It is a possibility.

Remember : “the judge cast doubt on whether the former prime minister’s legal strategy can be effective in his upcoming trials”

(Oops – slight correction. My mistake. This is what the New York Times said. (https://www.nytimes.com/2020/07/28/world/asia/malaysia-1mdb-najib.html) Not what the Judge said. It is a conclusion by the New York Times that “the judge cast doubt on the former PM’s legal strategy. And my apologies.)
The defence strategy has just got you 12 years jail.
Tak cukup ke?
Here is the 2nd piece of advice I would have given to Najib.
It is not too late. It is still relevant.
You still face like 12 dozen charges or something.
Just plead guilty.

So tell them to write to the AG and negotiate a guilty plea.

First of all it will save the country the unbearable pain of finding out more and more how stupid a former prime minister had been. Please do not torture us some more. Enough already.

And you will only embarrass UMNO and the BN / PN more and more as more details of your stupidity become public. It will jeopardise UMNO more and more. Do you really want to do that? Dont you care for your party?

Just return all the money that you ‘didnt know about’.
Its really very simple.
You may have to accept another jail term but this is Malaysia maa.
All the jail terms will be concurrent.
Say you negotiate for 6 years. It will be concurrent with the 12 years.
Ok what. It can be a good deal.

I believe the Warisan led Sabah State government has fallen.
The PN is now in power in Sabah.

With the guilty conviction against Najib and the fall of the Sabah Sate government this makes Tan Sri Muhyiddin Yassin much more in control.  It appears that as more time passes Muhyiddin is consolidating his position.

After Najib a few more UMNO MPs may be walking the plank in the Court. They are already facing charges. Zahid, Ku Nan, Azeeez, Isa and maybe some more. Ku Nan’s defence has already been called.

Because of the super razor thin TWO SEAT majority in Parliament the PN government may fall if these Court Potatoes pull their support for the PN (as a bargaining chip).

But if the PN falls which party will replace the government?
Who will be the new PM?
Its a big mystery.

So for these jokers it will be safer for them to go with the devil they know than the angel they do not know.  So I dont think they will be a threat to Muhyiddin in any way.

I believe that there is a carefully laid out plan for the political succession.
It is based on some educated guesses (like Najib being found guilty).
Plus a few more being found guilty. (You really do not need a crystal ball ok.)

The next phase is consolidating the PM’s position.
This is already happening now.