Never has a more pampered fellow expressed so much self-pity.

After a lowly fence hopper had been by contrast unceremoniously grabbed, cuffed and dragged off to police custody outside his trial, Najib himself emerged grandiose and walking free as ever despite his guilt, clad in his smart suit, with no handcuffs, no restraints, stopping to speak to the cameras on his way to his usual police escorted chauffeur-driven limo cavalcade. 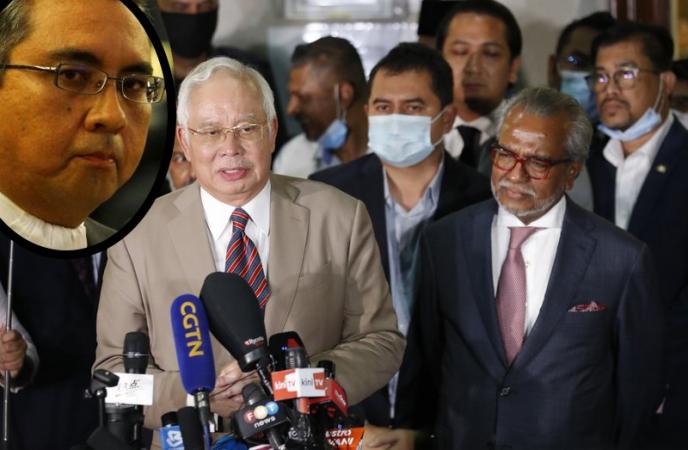 He lectured the assembled journalists, who for years have lived in terror of his oppressive threats against critics of 1MDB or UMNO’s rampant corruption, that they should all feel sorry for him after he had done so much for Malaysia promoting liberalism.

Next, his lawyer Shaffee Abdullah (who himself also faces charges for money laundering 1MDB cash) chipped in to say that Najib’s only failing had been to be ‘too trusting’ of his juniors – no crime at all!

Smugly, Najib suggested that he had no doubts at all that the larger number of senior judges at appeal would all see his innocence and dismiss the judgement of the High Court judge who has listened to this case for two full years and just delivered the most uncompromising verdict of guilt on every charge.

This chap was wrong, chimed Shaffee, who himself reversed a NOT guilty verdict against Najib’s opponent Anwar in yesteryear by driving an outrageous and unprecedented appeal against an acquittal through the higher courts that was later dismissed as a miscarriage of justice by the Agong the moment Najib was turfed from office.

Shafee had been brought in as a freelancer by Najib to do the dirty job, presumably because no self-respecting prosecutor would defy convention (against double-jeopardy) in such a way. He pretended he was doing it for free (‘for the nation’) but Sarawak Report later showed that Najib secretly paid Shaffee RM9.5 million of stolen cash from 1MDB for his services – money the lawyer apparently failed to declare and will have to eventually answer to in court.

It was this noble agent of the law who then set about pompously and deceitfully denigrating his senior judge on the steps of the court. He would not call the judge dishonest, said Shaffee disingenuously, because that would ‘get me into trouble’ – in other words he called the judge dishonest.

Shaffee then listed his reasons why the ‘not dishonest because I would get into trouble if I said he was’ judge was instead simply not up to the task he had been given and plainly lacking in understanding of the law.

Patronisingly, Shaffee explained the judge plainly didn’t understand the difference between a civil and a criminal trial when it came to the burden of guilt. He also claimed the judge was simply plain wrong to suggest that Najib as sole shareholder and signatory of 1MDB and as Minister of Finance employing everyone involved, could be calling the shots over and above the board he had appointed to the company. Of course the board was responsible and in charge, said Shaffee, the all powerful prime minister was utterly subservient to the plans of others to steal billions and shove them into his own personal accounts.

In contrast to such nonsense, Judge Mohamad Nazlan Ghazali had stated perfectly clearly in his precise and factual judgement that on each count on which he’d been charged there could be no reasonable doubt but that Najib was as guilty as night follows day and that Shaffee’s months of incredulity busting bluster had simply failed to make a case for the defence.

After all, delaying tactics, stunts, changing stories and ludicrous excuses do not add up to evidence or a believable argument, as anyone who has followed the case knows full well. As the judge detailed it had emerged over the course of the trial that Najib had driven the entire theft, opened the accounts into which the money went, notified each time that he needed topping up before spending the cash, admitted to his signature on all the documents before retracting his admission but then ducked out of testing the handwriting after all and dropping his denial.

Hence, the judge was left in no doubt that Najib was guilty. Yet there outside the court, Shaffee brazenly claimed that he had got it all wrong and implied the judge had identified reasonable doubt of Najib’s guilt, meaning that only in a civil case could he rule against his client. “It must be beyond reasonable doubt in a criminal case” Shaffee gravely explained, as if the judge were a first week student of the law.

In fact, in his summing up Judge Ghazali made clear he was in not doubt at all. And nor should the Appeal Court be either when Shaffee finally concocts his grounds for contesting the ruling in this case. The higher judges in fact could do no better than reject the appeal outright and end this expensive charade once and for all.

Alternatively, why not prosecute the guilty party and his flagrant lawyer for such and open act of contempt on the very steps of the court, as they stood belittling and accusing a hardworking and effective judge?

Najib himself (and now the new coalition of which he forms a part) has never hesitated to go after anyone who criticises judgements or suggests corruption of any kind when a court has judged in his favour. So he and Shaffee should be done by as they did and face the same penalty.

Journalists and bloggers are at this very moment facing charges of contempt having allegedly criticised the system of justice or allegedly allowed it to be by others. A critic of Shaffee’s now discredited prosecution of Anwar was also prosecuted for contempt.  And yet this pair appear to think they should be allowed themselves to rile up trusting political followers with talk of corruption in the courts with impunity.

Given this honourable and brave judge has now predictably this very evening started to become the target of a growing deluge of vitriol and attacks, thanks to Shaffee’s ungracious undermining of his honesty and his verdict, action should be taken right away to issue proceedings for contempt and to super-fast track this appeal so the country can move on from this poisonous episode and the pampered individual at the heart of all of it. – SARAWAK REPORT

Attempts made to discredit judge’s impartiality after SRC ruling

Attempts are being made to discredit the credibility and impartiality of Justice Mohd Nazlan Mohd Ghazali after he ruled that former prime minister Najib Abdul Razak was guilty of all seven charges against him in the SRC International case.

Among the allegations being peddled on social media, was that Nazlan, aged 51, is either the grandson or grandnephew of Najib’s archrival Dr Mahathir Mohamad.

One of those who made such allegations was Pertubuhan Minda dan Sosial Prihatin Malaysia president Ramesh Rao, who is a Najib stalwart.

A tweet he made claiming this, has over 200 retweets as of writing.

“We should be flattered that they think such a learned judge is related to us but he’s not,” she told Malaysiakini.

The nonagenarian’s eldest grandchild is 33-years-old.

Lawyer New Sin Yew confirmed with Malaysiakini that such messages could be liable for contempt of court.

Besides the Mahathir claim, others trying to discredit Nazlan are also highlighting that he was one of the judges who acquitted and discharged DAP representative P Gunasekaran on two charges of supporting the Liberation Tigers of Tamil Eelam (LTTE) terrorist group.

The ruling was made after the prosecution informed the court they had received instruction from the Attorney General’s Chambers to discontinue proceedings against the accused.

The insinuation appears to be an attempt to link Nazlan to DAP.

Najib was charged for abuse of power, criminal breach of trust, and money laundering in regards to RM42 million in gratification he received from SRC International.

In his verdict today, the judge ruled, among others, that it was “far-fetched and self-serving” to claim that the former premier was duped by fugitive businessperson Jho Low.

Nazlan also dismissed the claim that the monies in Najib’s bank accounts were a donation, saying that as the former premier he did not make the effort to verify the letter from the Saudi royalty, who was the said donor.

He also noted that Najib did not send King Abdullah a thank-you note.

He sentenced Najib to serve a 12-year concurrent jail term and fined him RM210 million.

The judge allowed a stay of execution, but raise the bail amount by RM1 million. – MKINI