Dr Mahathir got his butt kicked in FIVE BY ELECTIONS before this : Kimanis, Cameron Highlands, Semenyih, Rantau and Tanjung Piai.
Tanjong Piai was the worst where Dr Mahathir’s U-Tuning and failed reforms saw him lose Tg. Piai by over 15,000 votes. It was a wipeout.
And now Dr Mahathir has lost for the SIXTH time – in Chini.
As predicted by some (including me) Dr Mahathir’s candidate has lost his deposit.
Here are the results : 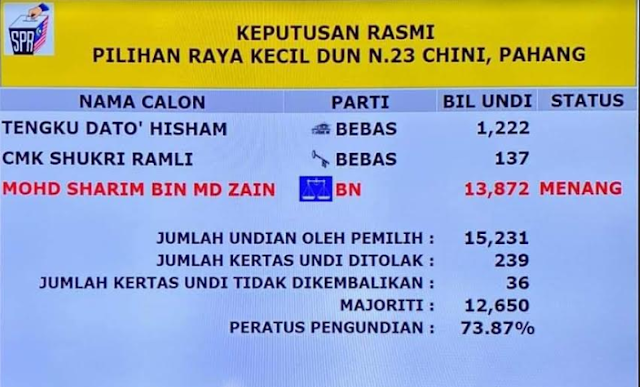 The “worrying factor” is the high turnout – 74%.
And a solid 91% of the 74% who turned out (13,872 / 15,231 = 91%) were obviously mesmerised by that pot bellied moron riding around on that quadbike and kapcai bike etc. As I said before, the people are easily impressed.
Does Chini reflect how the Malay voters will vote in the next General Election?
I dont think so. It depends.
If the General Elections are held today then the Malay voters may still vote for a pot bellied moron riding around on a quadbike.
But if the General Elections are held later (or in 2023) then the outcome is going to be unpredictable. Why? Because the economic situation is worsening.
The unemployment figures for April 2020 has exceeded 800,000 (according to the MTUC yesterday). We must add the May and June figures on top of that.
There does not seem to be any economic turnaround situation in the immediate future. Not in the next SIX months.
And when that Loan Moratorium is lifted in October 2020 the loan defaults are going to skyrocket, especially Hire Purchase loans and Credit Card debt.
The banks are going to be in trouble.
If the Loan Moratorium is extended the Banks will still get into trouble because they would not have earned interest income for MORE THAN SIX MONTHS.
So the more time passes things are going to get worse – for everyone.
Even if there is a turnaround it is going to be the more efficient sectors first.
Those sectors of the economy that are more used to open competition will turnaround first.
Those NOT dependent on government money should see a quicker turnaround.
Those sectors of the economy that are dependent on easy government money (taxpayers money), on oil money etc are going to suffer for a longer period.  Or they may not recover at all.
Race, race, race again. Its always race in Malaysia.
Back to the Chini By Election. This win by the BN / PN candidate is another nail in the coffin for Dr Mahathir’s plan to call for a Vote of No Confidence against the PM.
I dont know how Dr Mahathir is going to even start the No Confidence process.
The No Confidence Motion will not work without Brader Anwar’s 38 PKR MPs.
That is Matematik Darjah Empat.
But U-Tun now says he wants Shafie Apdal for PM.
So why should Brader Anwar throw in his 38 PKR MPs to support U-Tun’s No Confidence Motion just so that Shafie Apdal can become the next PM?
What type of cock and bull is this?
Now if you know this, I know this and everyone knows this surely U-Tun also knows this.  The No Confidence Motion is not going to happen.
My reading is Tan Sri Muhyiddin Yassin will remain Prime Minister until 2023.
And U-Tun knows this as well.
It is just a wayang going on.
By that time I think pot bellied Super Moron and his quadbike will be locked up.
Some jail time is coming.
Java Man will also spend some time behind bars.
They are out of the picture. Gone.
I was right when I said before that Muhyiddin Yassin will be our 8th PM.
Because that has ALWAYS BEEN PLAN A – from U-Tun himself.
This was common knowledge inside Bersatu.
I believe the next two closest candidates for PM will be Mohamad Hassan and Hishamuddin Hussein Onn.  One will be PM and the other will be DPM.
And all this is already being planned.
The rest is wayang.