Ok I have not said anything about China for some weeks.
But almost everyday I keep up with what is going on in China.
I have been to China and Hong Kong a few times and to Macao.
But China keeps changing by the minute.
You cannot say that you have ‘seen’ China unless you saw China just yesterday.
Have you seen that slide show ‘China Leaves US In The Dust‘ or something like that? Well, actually China is leaving the whole world in the dust.
Here is some other trivia – about 2/3 of public transportation buses in Japan are Made in China. Can you imagine – Japanese buying buses from China. What happened to Made in Japan buses? It also shows that China Quality can conquer Japan.
1. Here is a short video about a Hema Supermarket in China. There are over 100 of these stores and they are expanding. Hema Store is owned by Ali Baba. The short video explains it all.
So this is super modern China. Everywhere in China they have made technology almost fully democratic. They have already taken their 1.5 billion population to higher levels of civilisation, achievement and standards of living through the urgent and almost “ruthless” application of modern science and technology.
China represents the democratisation of technology. They place the latest technology at the street level, accessible and to be used easily and as cheaply as possible by every citizen.
In the early 2000s – before the arrival of smart phones – I visited China where every shop and store had a computer terminal hooked up to some Chinese Search Engine. The sidebars were always full charts and graphs of exchange rates, stock markets and commodity prices. Even the shopkeepers were tuned in to the world economy.
China has also made tremendous advances in cutting edge technology where they have surpassed the rest of the world. One example is 5G communications technology where China has already surpassed the world. The USA is quite far behind in 5G technology.
Another area of super advancement is in new weapons.
2. For those of you who know about how to blow things up there is something called a rail gun. This started as an artillery piece. Normal artillery guns (meriam) use chemical explosives (like gunpowder) to shoot an artillery shell at a target. Maximum range about 50-60 km (for the past 50 years).
The rail gun uses electro-magnetic induction coils wrapped around the barrel of the gun which propel an artillery shell through the barrell by use of magnetic induction.  The rail gun can fire a projectile more than 160km. This is very high tech. This also means that artillery and naval guns onboard ships DO NOT NEED to carry explosives any more – a huge savings in cost, storage space and a huge increase in safety.
Here is a short video.
For over a decade now the USA has been trying to get a working model of a rail gun but with little success beyond the bolted-on-a-concrete-block “prototype” that you see in the video.  Their prototype can only be fired once, with much work needed before refiring. Because the railgun’s barrel gets torn to shreds due to extreme pressure, friction and heat. They say they have mounted one on a ship but thats all we hear for now.
The Chinese on the other hand have already produced a working model of the rail gun, mounted it on a ship and have begun sailing the ship around the seas. Here are pictures of the Chinese Type 055 Destroyer with a rail gun mounted up front.

The critical issue here is the amount of power (about 25 Megawatts or 25MW) that is needed to fire this naval gun. Obviously the Chinese have overcome this bottleneck whereas the USA does not yet have a naval vessel that is capable of generating so much spare power.
The artillery or naval railgun can shoot over 150 km and is very accurate. But the Chinese have not stopped there. They have now miniaturised the rail gun and started making railgun rifles and pistols  for their soldiers and infantrymen. 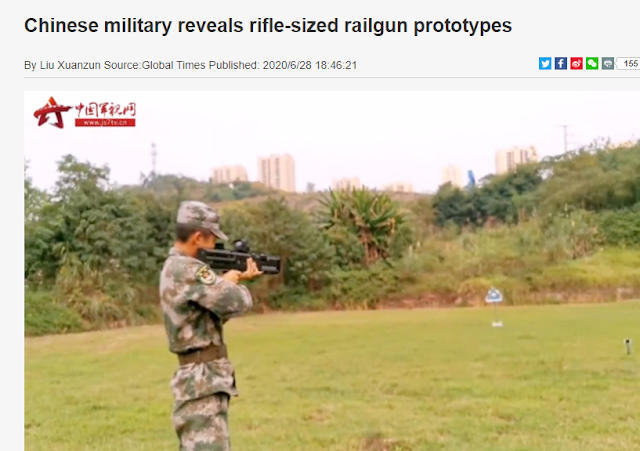 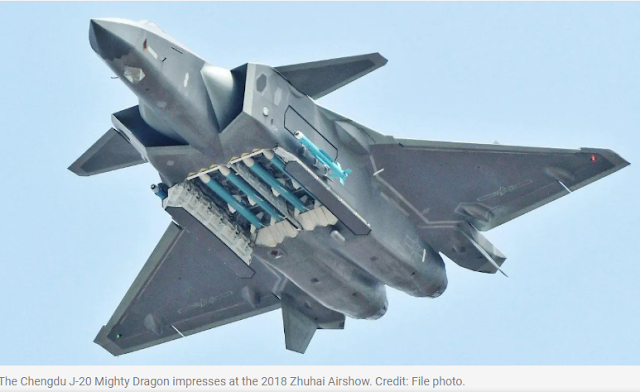 The interesting thing about this plane is that its full capabilities are not known to outsiders.
The development of this plane also represents a unique Chinese method of pushing the technical envelope and saving costs at the same time.
The Chinese develop not just one plane but plan a series of variations of the same plane with “planned” upgrades along the way. This plane first flew in 2011 – after being in development since the early 2000s.
When it first flew the main components were the plane’s stealth characteristics.
The Chinese wanted a stealthy plane.
But the engine was “said to be” underpowered.
The Chinese still got the plane in the air.
However the weapons and armaments needed upgrades.
Four years later by 2015 the Chinese had produced two new air-to-air missiles which you can see strapped to the plane.
The FOUR missiles inside the open bomb bay are PL-15s while the outer two are PL-10s.
PL-15 air to air missile, maximum range of 300 km
much higher than American AIM-120 180 km or less
American F-22 and F-35 fighters equipped with AIM 120-D missiles
massive range deficit of only 180km remains
PL-10 missiles can be fired at off boresight angles of 90 degrees
using Helmet Mounted Display (HMD)
they can be fired in the direction that the pilot points their head.
The PL-15 has a range of 300km, almost TWICE the American AIM 120’s 150-180km.
As it says the PL-10 missiles can be fired in any direction that the pilot turns his helmet (up to a 90% tangent?)
Most missiles can only be fired within a maximum “launch angle”.  Since air to air missiles carry limited rocket fuel and the shortest distance between two points is a straight line, any winding or twisting flight tracks can burn up fuel and lose the target. Especially if the target is “flying cold” or away from the missile. Plus the guidance system may not “lock” soon enough if not fired straight at the target.
The Americans have a missile the AIM 9X missile (aka Sidewinder) which can be fired at ‘HOBS’ (High Off Bore Sight) angles as well. But it has range limitations. So the Chinese PL-10 has made significant improvements in this area as well.  It has become a more potent weapon.
Bottom line is China is powered by the maximum use of science and technology.


The more a society latches on to science and technology – and yes to the exclusion of all other stupid, useless, time wasting ideologies, faiths and spiritualities – the more that society will progress.
Here is a question :  Going at this pace, can you imagine where China will be in the next 50 years ?