Sultan Kedah Al-Aminul Karim Sultan Sallehuddin Almarhum Sultan Badlishah leaves the National Palace here today. The Sultan among the Malay Kings that attended for a special meeting of the Conference of Rulers. The meeting has been convened to discuss the current political situation in the country.

Ampun Tuanku.
I already said this weeks ago.

Yes even with a ONE seat majority in Parliament it is enough for the Prime Minister to remain in Office. ONE seat is enough. But this is a very thin majority.

What if an MP dies or is incapacitated and cannot come to Parliament?
Then the majority can be lost.

Without the Budget the 1.6 million Civil Servants will not get their salaries.
All Government spending will come to a stop.

Like it or not, if that happens the Government must resign.
There must be a new Government or there must be new General Elections.
This is an obvious statement.

Dr Mahathir says here that the Prime Minister Tan Sri Muhyiddin now only has a TWO seat majority. But as always Dr Mahathir’s language seems to indicate something else.

Here is the news : 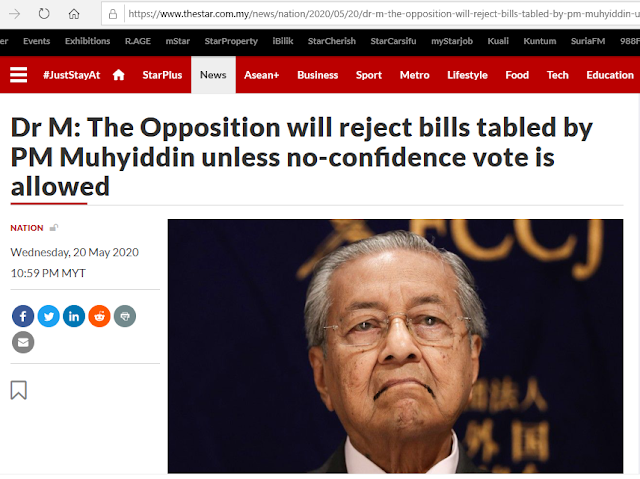 Dr M: Opposition will reject bills unless no-confidence vote is allowed
Wednesday, 20 May 2020

Opposition will reject bills tabled by Muhyiddin unless vote of no confidence first
says Tun Dr Mahathir Mohamad (pic)
“If everything he brings to parliament is rejected, how does he continue?”

Dr M reckoned PN only holds two-seat majority in 222-seat Dewan Rakyat
he would keep working to topple government
That is the narrowest majority any government in Malaysia ever had.
“(Muhyiddin) is going to be in very great trouble.
whatever chance we have to prove he is not legitimate prime minister
Dr Mahathir said he would seek to oust Muhyiddin at every turn.
prospect of more political and policy uncertainty in Malaysia
On Wed (May 20), 94-year-old former PM questioned legitimacy of PN govt
wrong for this backdoor arrangement
We want to give people the rightful government they chose
Muhyiddin emerged as PM in March after alliance with Umno, PAS, former PKR
My comments :
Dr M says the PM Muhyiddin has a TWO seat majority for now.
I thought the PN has 114 seats – a THREE seat majority.
This is also creating doubt.
Exactly how many seats does the PN have?

The following graphic has been going around WhatsApp. It is just a graphic – no big deal. I like it because it gives a pretty accurate snapshot of the seats in Parliament. 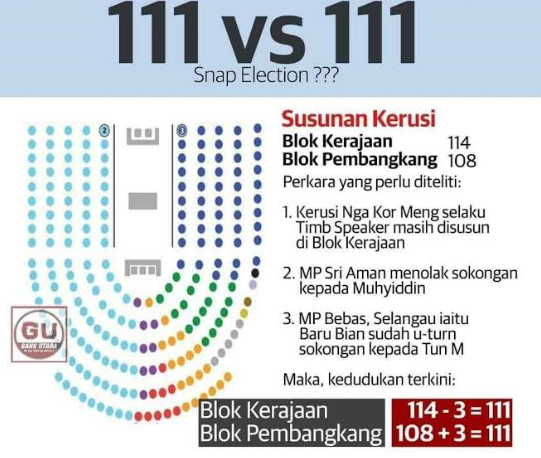 We know Baru Bian has U-Tun to support Tun M. I think that still holds.
That point about Deputy Speaker Nga Kor Ming is interesting.
And that other Sarawak MP has indeed notified that he should be seated with the Opposition.
So this does prompt the question, exactly how many seats majority does the PN have in Parliament?
Which is also why I think Dr Mahathir made that statement to Reuters :  “If everything he brings to parliament is rejected, how does he continue?”
This can only happen if the PN does NOT have a simple majority.
My view is HRH the YDP Agong is the person to sort this out.


This is purely Federal Constitution stuff.

This is exactly separation of powers stuff.

First comes the Legislative and only then the Executive.

The person who has the task to oversee both is the DYMM YDP Agong.

My final view is the margin is too thin (to state the obvious).

Dr M said it :  That is the narrowest majority any govt in M’sia ever had.

If the Bills cannot be passed, the government of the day is no more.