No Post Corona New World Order. Just The Dumb Will Get Dumber.

Post corona virus there is not going to be any more “new world order” than what is there already.

The Saudi Arabian genocide in Yemen will still continue.
The United Nations will be in active collusion in this genocide.
The UN will most likely appoint another British fellow as their mediator or negotiator. It has happened so many times in so many conflicts where the British have an interest. Nothing much will change there.

So nothing will change there. Except if Mr Putin steps in (which he has begun to) and can provide the Taliban with some much needed guidance. Then the equation might improve a little.

I dont think much will change in the world. The virus is a sudden, external trauma.
It will not change what is already inside peoples’ heads.
To use an analogy lets say there are 20 people in a bus. All their shoes get stolen (they stopped at a mosque for prayers). So they drive to the nearest shoe shop and they all buy shoes. There is only one type of shoe – heavy duty winter boots which weigh about a kilo each. 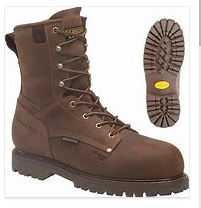 So the boots weigh everyone down equally.   But different people will react differently. Some are really weighed down and cannot walk as fast. Others  exert extra effort to be able to walk at their regular pace. A few will feel no difference because their stride was already fast and powerful all the time.
So the winter boots are like the Corona Virus, it burdens everyone equally. But how people react will differ. And their reactions will reflect their behaviours before the advent of the virus.
Those who were litter bugs would likely remain litterbugs.
Those who appreciated good hygiene and cleanliness will feel vindicated and become even more hygienic.
Already conscientious societies like Japan, will become even more polite and conscientious.  Because it helps them overcome crisis much easier.
Rude societies will possibly become more rude.   The Islamic countries which have become increasingly “Muslims first” may get worse with their “Muslims first, non Muslims can go to hell” prejudices. So there will be more tension in such societies. Nothing much will change.

As for curing the virus itself there is some extra hope. If that Israeli vaccine hits the market by the end of this year then the crisis is effectively over.  For the first time (I believe) the community of nations has agreed to share any new vaccine as quickly as possible. That is another sign of common sense and rationality getting through among the international community. It is a good development.


The other Israeli mathematician’s prediction that the virus goes through a 70 day cycle is perhaps also coming truer. Here is a forecast by some folks about the virus reaching its end in Malaysia 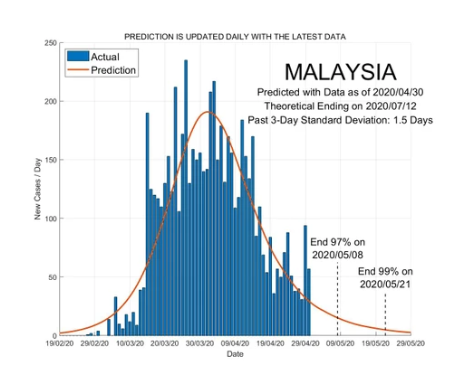 In the graph above the curve began rising in the 1st week of March 2020.
It is expected to be almost over (97% cases would have ended) by 8th of May 2020.
That is 69 days.
Again it is close to that 70 day prediction by the Israeli mathematician.
Lets hope that is what happens.
Then we may not even need a vaccine with  such urgency.

WHAT SHOULD WE DO ?

There is no perfect solution. This situation is unprecedented.

1.  I would suggest a return to basic analysis.

200 years ago on Earth (or even 100 years ago here) production was mostly individual. A man and his family produced for their own needs. It was an agrarian world. Wealth and value was in land, livestock and farm animals.

Now in the modern age almost all production is a collective effort.
Almost no one produces for his own sustenance all by himself.
Even agriculture depends on its supply chain.

50 people from multiple countries (Indon, Bangla, China, India, Malays) may pool their collective skills and efforts in a factory in Dengkil to produce a product.
Human productivity and consumption is a collective effort.

The ‘collective’  is therefore critical.

Factories, businesses, companies, cooperative societies, banks, finance companies are all collectives.
To get the economy back on its feet incubate and water the collectives first.

Take care of the factories, businesses, companies, cooperatives and make sure they get back on their feet.

Now I have said the following before.

2. In Malaysia this does NOT mean spending taxpayers money.

No need to spend taxpayers money all the time.
In Malaysia there is a much simpler method.

The government of Malaysia please get the hell out of the way.

Do not be a stumbling block. Do not prevent people from achieving what they can achieve.

That is why our economy is so weak today.

3. Put back the demand and supply equations back into full speed again.

Get TNB to cut the electricity tariffs proportionate to the drop in fuel prices. If oil prices have crashed 40%, then TNB tariffs should also be cut by 40%.  Since TNB uses a coal, the price for coal has also crashed.

Lower fuel prices and lower electricity prices will benefit the entire economy in no time. Businesses and factories (the “collectives”) that are suffering poor sales and weak cashflows will at least enjoy savings in fuel and electricity costs.

These ‘collectives” where the majority of human beings gather to earn a living will benefit. They will be able to get up and go much faster. The economy will move.

Nobody is asking TNB (licensed monopoly) to become the Jabatan Kebajikan Masyarakat.

Nobody is asking the cooking gas suppliers (licensed oligopolies) to become the Jabatan Kebajikan Masyarakat.

PLEASE DO NOT CHEAT THE PEOPLE.

Oil prices are NOW super low. It WILL move up once the Corona dies down.
Can the government help the oil companies to freeze petrol pump prices for as long as possible. Say 24 months?

Lock in your oil futures contracts for 12 months or longer.

I believe there are simple ways (financially) for the oil traders to make this happen.
Its called the futures market lah.  The oil traders will know what to do.

But why the hell should the oil companies do this?
Oil companies are not the Jabatan Kebajikan Masyarakat.

Well the government can help the oil companies to buy forward and fix pump prices by giving them special soft loans over this term (short term loans). To help increase their ROIs a little. Their share prices will also move up.

Or the government can give the oil companies tax concessions (like x % tax reduction) for say TWO years once they agree to lock in pump prices at today’s prices (or less). Tolong sama tolong lah.

Because this is an emergency situation.
This is a keadaan darurat.

Oil prices crashing is very, very good for us the people.
But very bad for the government which needs oil revenue.

The corona virus has created massive problems for everyone.
The economy is even more worse.

But if we can lock our pump prices for 24 months (or even for 12 months) then there will be much savings for the “collectives” in our economy.
Factories, hotels, restaurants etc where Malaysians gather “collectively” to earn a living will find it easier to survive.

The people will benefit and the economy can swing back faster.
Ingat baik-baik – Always people first.
Boleh faham ke?

And as I said earlier please suspend the Minimum Wages – for at least 5 years.

I have many more suggestions but no time for now.

Dont you wish I was the Finance Minister?