Syed Saddiq shared a copy of the police report he lodged, in which he stated that he only noticed the missing cash around 7pm last Saturday.

The report described the condition of the crime scene left behind as neat, with no obvious signs of forced entry or prying on the safe box.

“My safe box has a secret code, and there are only a few selected people who know where I keep it,” Syed Saddiq said in the report. 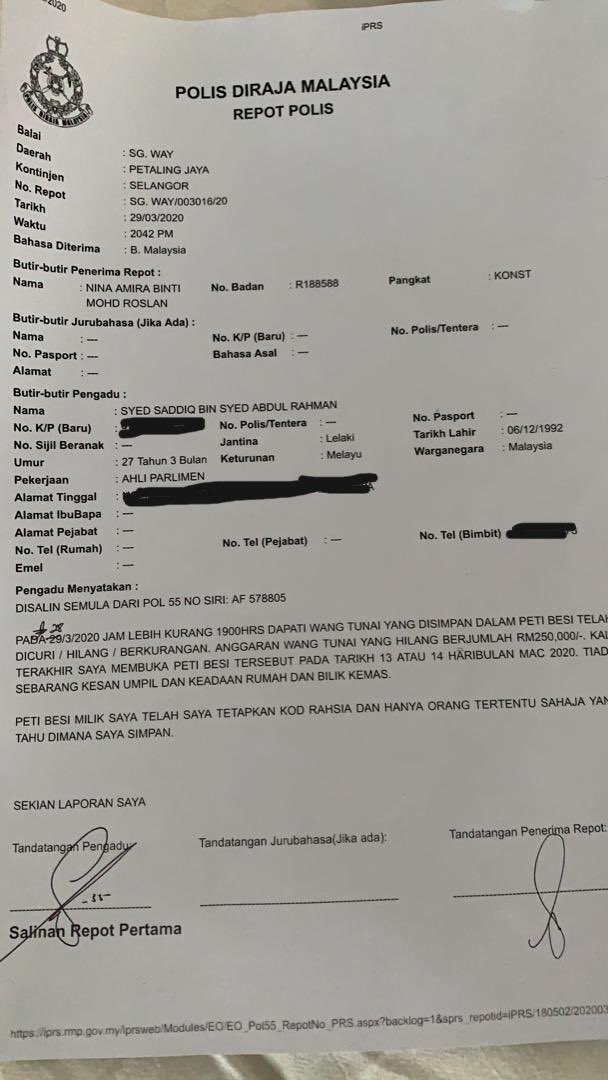 2,695 people are talking about this
The Muar MP issued a statement later to confirm the incident, which added how police forensic investigators were called in to examine the scene last night.

He also disputed reports that described the money as belonging to his party, Parti Pribumi Bersatu Malaysia, but did not specify if he was the owner.

“For the time being, I am unable to verify any specific details or speculations until the investigations have completed.

“Media reports that the RM250,000 was money belonging to PPBM is not true and the estimated losses have not been established yet.

“I hope that all parties will refrain from making speculations and from spreading unverified news to the masses,” said Syed Saddiq in a statement today.

The Bersatu Armada chief said the report undermined his credibility as a party leader, and has caused him to be slandered by third parties.

“I can confirm we received the report, and all I can reveal is that the case is still under investigations,” he told Malay Mail.

“We have detained the maid to assist with investigations,” he said, adding the case is being investigated under Section 380 of the Penal Code for theft in a dwelling house.