Many have complained that Luxembourg was dragging its feet over the Edmond de Rothschild CEO, Marc Ambroisien, who handled hundreds of millions of dollars of 1MDB’s stolen cash, although Malaysia’s path to justice has been even slower and may now have stalled thanks to the appointment of an unelected leader last month. 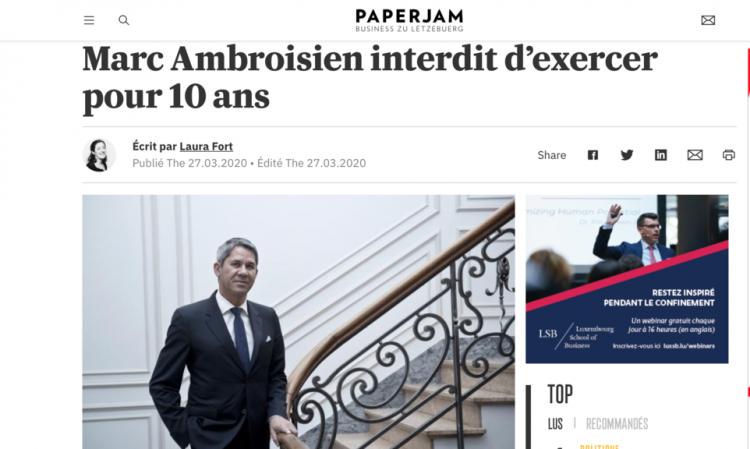 The ruling is summarised under the dictum that Ambroisien “no longer fulfils the professional integrity requirements” to perform a role in the financial sector:

As was reported in detail by this blog at the time of the exposure of 1MDB, Ambroisien worked closely with the Abu Dhabi crook, Khadem Al Qubaisi (KAQ) who acted as Chairman of the sovereign fund Aabar and CEO of IPIC, receiving backhanders of half a billion dollars in return for assisting Najib and Jho Low as they laundered billions raised in bonds by Goldman Sachs, supposedly to invest on behalf of the fund.

$681 million of those purloined billions went directly into Najib’s own personal bank account just before the 2013 election, primarily to buy votes and if necessary MPs, having been transferred through a series of bogus off-shore shell companies set up by KAQ in places like the British Virgin Islands and Seychelles. KAQ also put IPIC’s Falcon Bank at the disposal of the kleptocrats, channelling that $681 million through the Singapore branch.

It was Ambroisien’s job to help KAQ stash and squander his massive kickback, which was all placed with the Banque Privee Edmond de Rothschild (BPER) in Luxembourg through a number of transfers organised by Jho Low through yet more bogus off-shore entities, such as his Seychelles company Good Star Limited and a BVI entity Blackstone Asia Real Estate Partners (designed to pose as a subsidiary of the major US investment fund Blackstone).

Transcripts made available to Sarawak Report detailed a conversation in which Ambroisien warned individuals working for KAQ that any mainstream bank would freeze such suspicious sums of money, so they had better keep the cash with BPER, where his seniority ensured he could launder the cash.

As a token of thanks KAQ organised the delivery of an Aston Martin to the banker. However, there were other plum opportunities for the banker who set about constructing an elaborate network of onshore and offshore companies to hold the various assets KAQ acquired with the cash – these included the Torro Rosso racing car team and a string of expensive properties in Paris and the South of France, all of which companies Ambroisien managed in his capacity as a director, presumably on behalf of the bank.

Sarawak Report was the first to expose KAQ’s taste for the highlife funded by the thefts from 1MDB, since the Arab had developed an off-duty reputation as an enthusiastic clubber in Vegas and San Tropez, where his fleet of no less than 50 customised, top of the range sports vehicles drew comment throughout the South of France. Meanwhile, almost zero investment in development was being noted by the fund, which soon plunged into massive debt caused by the high levels of borrowing and theft.

Following Sarawak Report’s exposes KAQ and his deputy Mohammad Al Husseiny were both sacked and thrown in to prison/house arrest by the Pinces of Abu Dhabi, making them amongst the first to face consequences over 1MDB. Hakkasan is now in the process of being dismantled and both IPIC and Aabar were themselves closed and absorbed into the larger Mubadala fund by Abu Dhabi.

However, the bigger fish are still evading consequences. Jho Low and his entire team of helpers, who supported the thefts on behalf of Najib at 1MDB, fled into hiding shortly after the scandal broke (or in the case of Najib’s bank account manager Nik Faisal Arrif Kamil fled KL two days before GE14).

Najib himself has stalled his trials involving dozens of charges relating to these and other thefts for two years and has now achieved the toppling of the elected government that had pledged to clean up and punish those responsible for the world’s largest recorded theft.

With his own party UMNO now part of the as yet un-legitimised Coup Coalition Najib has attempted to start calling the shots once more. All trials have been stalled, thanks to the Covid 19 outbreak and Najib says he expects the courts to treat him in a more congenial manner now that the political situation has been changed.

The recent Harapan Government had made clear they would pursue Abu Dhabi and its Royal Family for the billions that state is liable to Malaysia for having aided and abetted the thefts in the first place and then conspired to assist Najib’s cover-up by funding 1MDB’s debt repayments, in return for a vast compensation package of billions agreed by Najib’s own Ministry of Finance.

The Coup Coalition seem likely to bow to UMNO pressure now to drop that case and continue Najib’s expensive cover-up and payments to Abu Dhabi.

Meanwhile, the new ministers in charge have claimed they continue to expect assets to be returned to Malaysia by those countries that froze them in spite of this return to office by the perpetrators of those thefts.

Abu Dhabi is likely to happily cooperate in a settlement that returns to the deal by Najib to pay it billions to get him off the hook. However, the Coup Coalition can whistle in the wind for the return of the frozen billions to help pay that bill.